I’m currently working on re-designing our robot’s intake and would be curious to know different kinds of wheels/rollers that could be used on an intake. We are currently using two rows of 2" compliant wheels, but I’m looking into alternative options. Any suggestions?

These balls are basically the best at letting anything work. What’s your goal with the redesign? Weight? Cost? Robustness? Machining simplicity?

I have seen some teams use a similar setup, but with mecanum wheels.

Just a quick reply - we like to put velcro “flaps” on our intake. We find that it grabs the ball nicely. Now I know what your thinking - doesn’t that destroy the balls or hold on to tightly? Yes and no. It does gradually pull fuzzys off of the cargo, although it isn’t catastrophic. Compare with rules as you will. Best of luck.

I think flaps in general may help depending on the redesign and size constraints.

Material is certainly one key factor in determining an effective intake design. However, it’s far from the only factor. Things like compression (both in terms of compression against the carpet and also against the reacting surface of your robot - typically either the bumper or frame), intake arm/linkage compliance, and intake speed can matter just as much as the material. And some materials that are great in certain set-ups may not work well in others. So, as with many things in FRC, it’s ultimately going to come down to what works well in your testing and prototyping. Don’t just assume that a new material applied as a 1-for-1 replacement of your existing material will improve results unless you’re also willing to tweak compression distances or intake velocities or linkage design as well.

That being said, 1712 used a surgical tubing-based intake this season. It was inspired by similar intakes used in FTC/VRC/VIQ and we liked its results in our prototyping a lot, and opted to use it over various compliant and mecanum wheels we tested. Here’s a video of an autonomous test of its in action, as well as a climbing test video that gives a pretty good view of the intake’s construction. We prototyped by “weaving” the surgical tubing around the spokes of 6" and 8" wheels, and made our competition version out of delrin disks (0.5" thickness from McMaster-Carr, although if you have a horizontal bandsaw you could easily make them thinner than that). Among the downsides of this particular design is the limitation in directions you can “approach” a ball, given then disks on either side of the intake prevent acquiring balls from the sides of the intake.

A lot of folks who were in the VRC community in the mid '10s would find this absolutely wild. Very cool.

Like, we literally used a roll of bandage wrap around a 1.25" polycarbonate tube and called it good. These balls can be picked up by almost anything, which has been awesome for teams this year. Compression is probably more important than material.

Oh we did a similar thing! I realized that the cargo was basically giant tennis balls… We ended up just having rotating Velcro belts. It worked quite well!

We used centering 2" mecanums because it’s what we prototyped & got working, but I’d recommend going simpler if we decided to redo it. Polycarb or even PVC tube with something grippy on it FTW.

Roller tubes
We use aluminum tubes with rubber. Worked awesome this year and on our Deep Space intake. Found a fast intake made a big difference.

100% agree. This is our first year using to using these…and they worked out GREAT (at least in our final iteration). We went with the VersaRoller product line to keep things easy. We used both Poly carbonate and aluminum rollers, depending on the rigidity we felt we needed. The surgical tubing wrapped around the tube made them supper grippy. Wiping the rollers down with rubbing alcohol helped keep them grippy throughout the season.

These have many ways to drive them. My favorite is to put a bearing on both ends of the tube, and then allow the tube to rotate on a Thunderhex standoff. This gives you the added support of a rigid standoff, and a lightweight roller to roll on top of it.

For rollers that needed to be driven by timing pulleys, we used the Vex Pro hex inserts, and those worked great too.

Urethane flat belting worked great to drive all the rollers, and made it so we didn’t have to worry about center to center distances. We simply wrapped some electrical tape around each roller a few times to give them a crown, and this worked great.

We decided later that we wanted to use compliant wheels on the end roller. Vex maker this super easy with their flex wheels. The 3" wheels are super economical too, which was awesome to see.

The only down side to this system is there isn’t a great solution for mechanum wheels.

PVC tube with something grippy on it FTW.

We used PVC on our 2019 transport, the only problem we had was that we had to make a custom adapter to a hex shaft using 3d printing, and then screwing through the PVC into the plastic. It worked well, but I think there are tubes with pre-made adapters.

They certainly helped us. Our final design (after four iterations) incorporated 2" Thrifty Bot mecanums on the outside ends of the main shaft (of a full-width intake) with a mix of 2" Rev compliant wheels and 3D printed flapper hubs with two 6" strips of McMaster poly belt in each. The inner shaft had mecanums and compliant wheels to feed the cargo into the indexer. The flappers created a kind of fan suction near the intake that would literally pull in cargo. We actually used this to program a 3-cargo auto on the off side of the field, sucking the third cargo away from it’s position on the opposite side of the mid-field line before we picked it up and thus skirting the rule that you couldn’t intake cargo from it’s original position on the off side. Here’s a picture of Loopy on the field with a view of the intake (retracted): 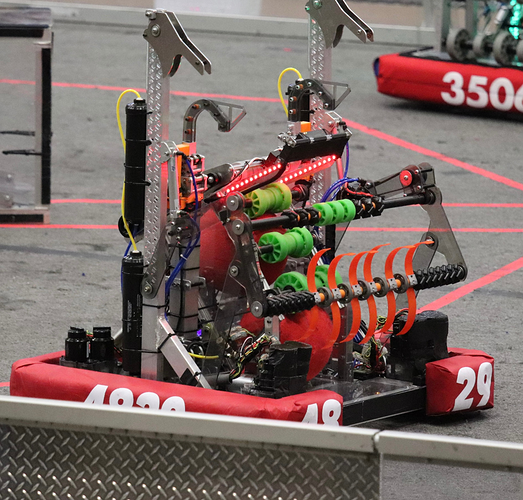