Inventing a wireless button pushing device for a taxi driver

Introduction: I was called by our financial mentor at Team Fusion Saturday night and he told me one of his friends, that runs a taxi around the area, wanted me to make something. I, of course, said sure! I’m always open to a challenge. Anyway, the guy brought his taxi to my house today and I looked at what he needed.

He explained to me, when he gets a dispatch, the touchscreen computer in his taxi will beep, and he has to push the button within 10 seconds in order to take the dispatch. For the audio relay, he is using a simple baby monitor that will go to his house. However, finding a readily available wireless device to push the button for him is a bit more difficult. I already decided the easiest and simplest way to do this is to use a simple servo and an arm to mash the virtual button. Designing the whole mechanism seems like it will be pretty simple, but a bit tough to build. However, the problem I have now is deciding which micro-controller to use and how to wirelessly connect the servo to a button inside his house.

All right, so I have a few questions…

What is a cheap and effective way to connect any two micro-controllers to each other. I was looking at some Parallax radios, but they are pretty expensive.

What is a good, cheap micro-controller to use that I know how to program? (PBASIC and C just as good as programming our robots, so not totally fluent)
Also, I need to keep in mind to keep the power requirements down to a minimum. I believe it was a Ford van. I don’t know if Ford’s have always-on 12V receptacles or not, so I may have to come up with a way to use a battery in it that will have to last at least 12 hours.

So to sum it all up. I need a 2 cheap micro-controllers and radios that are capable of sending a signal to push a virtual button on a touch sceen. One set for inside the house (Transmitter) and one set for the car (Receiver). It all needs to be portable and power efficient. I plan on putting a transistor in to shut off the servo when not being used to cut down on the power a little bit.

I know this is all confusing, but some information or tips would be great.

Look for a cheap transmitter/receiver with one servo for an r/c car, use the steering servo to mash the button.

Would an r/c car transmitter have the range to reach from the house out to a car? Good call on the r/c car.

The receiver side would just drive a servo

It is a very good call, but I don’t know the distances an R/C can can reach. It would probably be enough, but the transmitter will be way overkill for what this guy needs. I’m thinking I can get all the electronics and parts for like $120. I looked at towerhobbies.com and their cheapest transmitter was $52… receivers were almost $100.

You can get a really cheap R/C transmitter and ‘vehicle’ with at least one servo from Radio Shack for very cheap, maybe $30-40. If you optimize the antennas (position them parallel to each other, with minimal metal in between) 100 feet shouldn’t be a problem.

Thinking outside the box, consider using wires. 100 feet or 24 gauge speaker wire is very cheap, make it weatherproof and as he gets into the taxi to actually drive to the call he can toss it out the window, awaiting his return. Or maybe protect it somehow, but the key is don’t be afraid of wires - perhaps as an inexpensive test only… Press the button, a slow motor (or a weak solenoid) pushes a “finger” against the touchscreen. Power by wall wart, simple pushbutton, some kind of clip-on holder in the van…

Binome, the radios sound great! $10 for a transmitter and receiver. The micro-controller also looks good.

I’m also looking at PICBASIC. I see the “real” version is $100, but I found some other 3rd party alternatives. Any recommendations?

I am just throwing this out there to be careful of. if it is a touch screen make sure whatever you plan on poking it with will activate the screen. Some touch devices use heat others use capacitance, i am not an expert or anything but before you go out and buy stuff make sure it can be activated by a stylus or other non-finger poker.

Yep, already thought of that… It’s physical force that activates it.

I just read this thread and read you used the word mash for the pressing of the button. I would like to suggest some sort of a system(perhaps just some padding) to cushion the blow. Touch screens can be nice, but they can be fragile too. Try to make sure that you don’t end up damaging the screen in the process of helping him. I know that isn’t necessarily what advice you are looking for, it is just the best I can give. Control 12 Vdc devices using keychain on/off remote switch. Ideal for automotive applications, but can also be adapted to home use with the addition of a 12 Volt relay. Black-box receiver switches 12 Vdc loads up to 6 Amps when prompted by two-button...

the range would be questionable but if the guy is fine with his baby monitor you could just use one of these with the controller attached to a 12v solenoid with a rubber finger mounted to press the button.

This could be a less than $50 solution with no microcontroller required.

the range would be questionable but if the guy is fine with his baby monitor you could just use one of these with the controller attached to a 12v solenoid with a rubber finger mounted to press the button.

This could be a less than $50 solution with no microcontroller required.

That sounds like exactly what I’m looking for. Less work, and more professional looking. Thanks Greg!

I was going to suggest getting one of those and a power-lock solenoid from a junkyard. Put a nice cushy tip on the unlock knob and away you go.

The solenoind from an old mechanical door bell has a rubber tip and takes little power. Good call on the all electronics part.

Well, for almost the first time with me using AutoCad, I have made the part. However, it looks terrible, but I only really need it for the measurements and for making the part.

Yes, I’m posting this so late because I’ve been CADing all night… 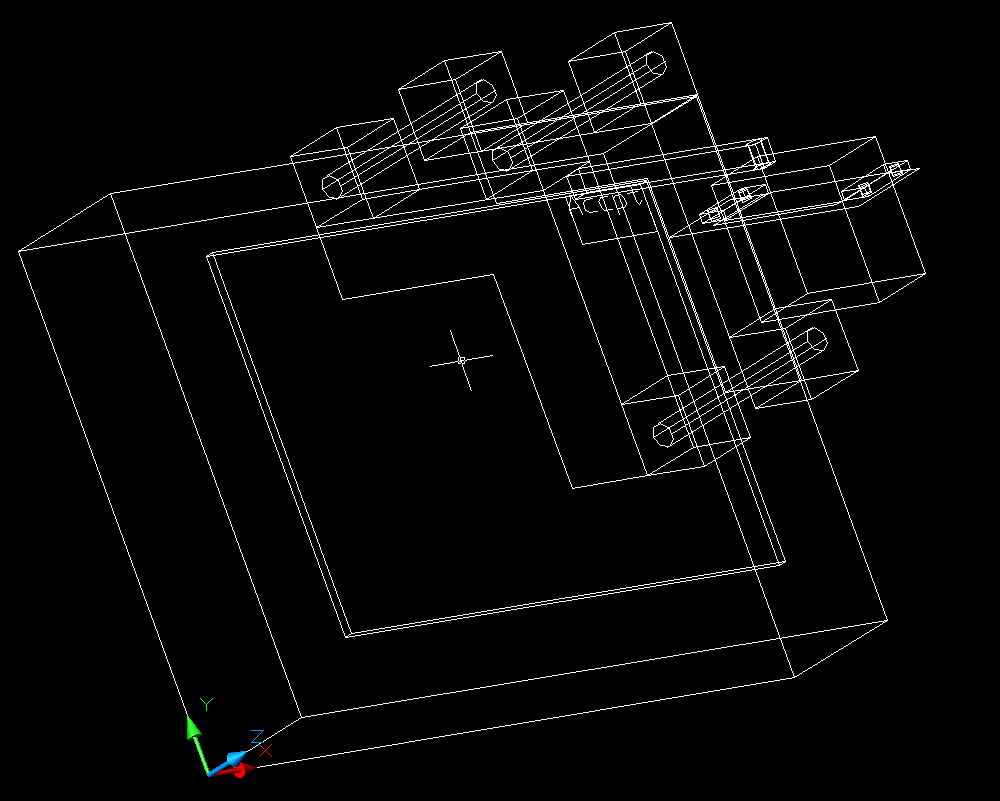 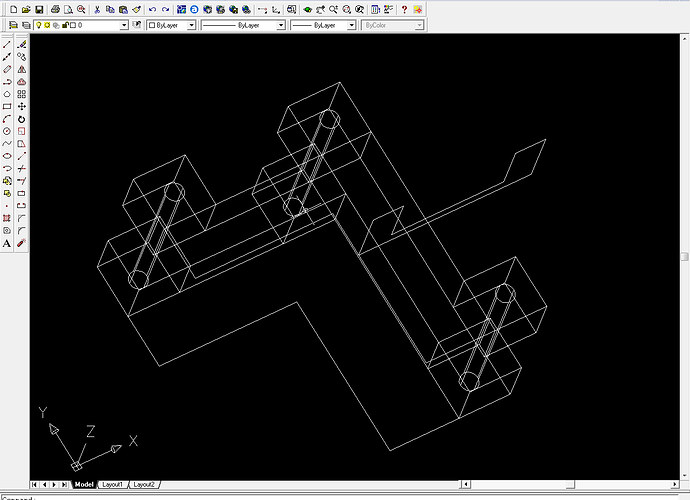 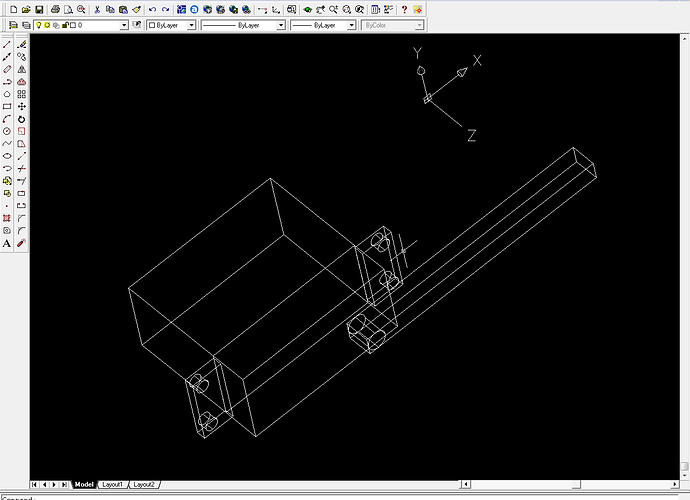 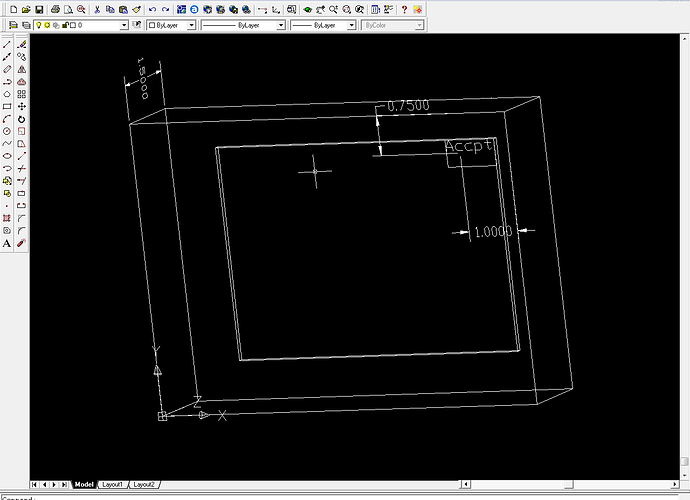 Also, for those with AutoCad, here are the actual drawings:
taxi computer.zip (35.3 KB)

As for the electronics, this is what I believe I’m going to use:

The remote control mentioned earlier in the thread by Greg. I also learned from the review that I can hack the remote to be a momentary button, which is even better for my needs.

APICAXE 8 Starter kit seems to be a cheap easy to program micro controller.

Overall, here are the prices I have to make this: