As a sort-of sequel to this post, and since I was asked, I’m going to write up a tutorial for making involute gears. I was actually asked a while ago, but I was busy with the F4 cadathon, so now I’m free to write this. 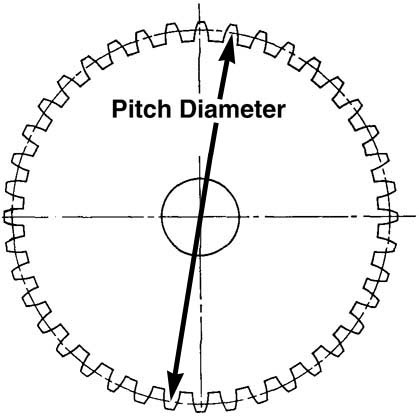 Much like a pulley, a gear has a pitch diameter, PD, which is dependent on both the number of teeth n and some constant which determines the size of the teeth. This is the theoretical circle where two gears are tangent to each other. However, the tooth-size-constant for a gear is not the pitch but rather the diametral pitch, or DP, which is the number of teeth in a one-inch gear, measured in teeth per inch. On metric gears, the tooth size constant is the module, m. DP and m are related by the following equation:

You can use either definition for PD, but in FRC we typically use imperial gears, which means we use the first version more often. There is another number which we need to know, though, which is the pressure angle, or \alpha, which decides how wide the teeth are. To understand \alpha, it’s easiest for us to look at the rack:

Rack Drawing639×666 33.5 KB
We can ignore the addendum and dedendum for now, and look at the pressure angle. It’s pretty easy to see here that the pressure angle doesn’t affect how wide the teeth are, but does change their shape. In particular, larger pressure angles result in chunkier teeth, which are stronger, but less efficient. In the industry, it’s common to have gears with \alpha of 14.5 or 20 degrees.

Most common gears have teeth which are involutes, a class of curve defined by “unrolling” another shape. Our gear teeth are circular involutes, which are made by unrolling a circle. 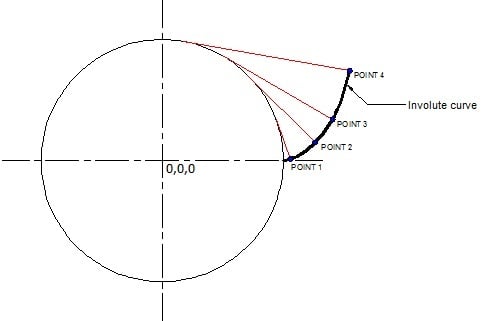 The reason we use this shape for our teeth is that it will always contact a rack with no slipping or interference. You would get an involute gear, for instance, by rolling a clay wheel on a rack and letting it form the teeth. You can think to yourself as to why an involute might be this shape.

Lastly, let’s revisit the drawing of the rack. We have both an addendum and a dedendum listed: the addendum is the length each tooth protrudes above the pitch line, and the dedendum is the length below the pitch line at which we find the root of the tooth. Naturally, the addendum must always be less than the dedendum, otherwise the teeth of two gears would interfere as they meshed. We can use our addendum and dedendum to compute a few more values:

I’m going to use SolidWorks for this, but any CAD software with a tool for handling equations will work just fine. We first fire up the equations manager, and get started. I’m using a 60t, 20DP gear with a 14.5 degree pressure angle. We can now start on some computations: 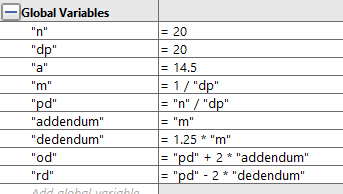 As you can see, I picked a 20t 20DP gear with a 14.5 degree pressure angle to design, but when we’re done we can reuse this for anything we choose. The values for addendum and dedendum are somewhat arbitrary, but they’re actually pretty common in most gears. Multiplying by m ensures that the teeth grow taller as they grow wider when DP changes. 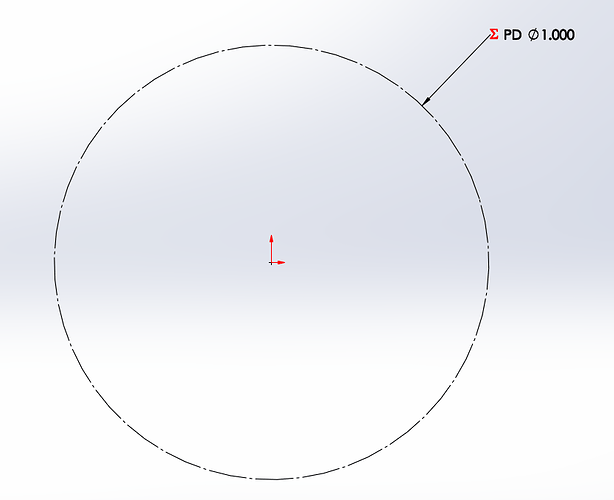 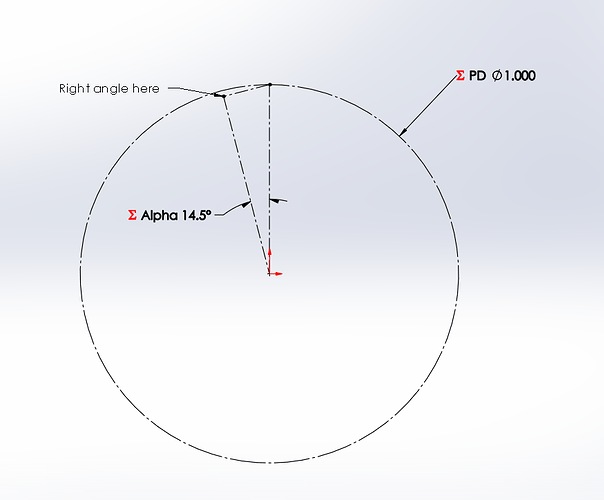 Base Triangle876×724 45 KB
Next we draw a right triangle with one point on the center of the pitch circle. The orientation isn’t critical, but I set the hypotenuse to be vertical so that I could fully define the sketch. We then want the angle on the origin to be equal to the pressure angle. 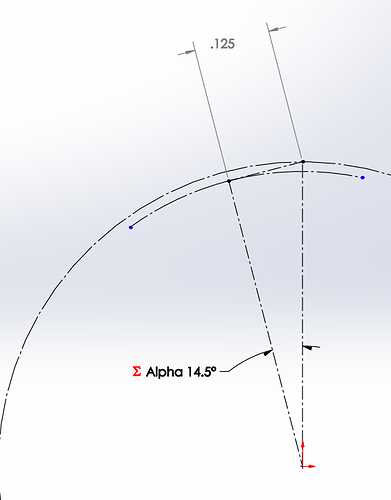 Base Circle Arcs565×722 35.5 KB
We now draw a pair of arcs which each have endpoints on our right angle. These two arcs lie along the base circle, which is the circle about which we draw the involute. I’ll also add a driven dimension to the shortest leg of the triangle, which will be useful later. 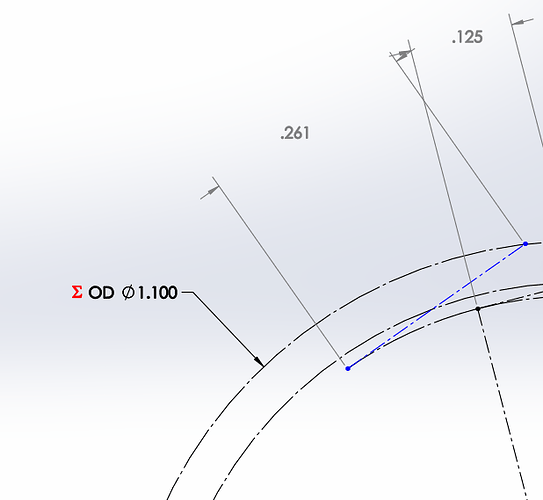 OD + Tangent618×569 36 KB
I now draw the outer diameter of the gear. We won’t need to draw the involute any further than this. Additionally, I add a tangent line from the end of the left arc to the outer diameter. I also add another driven dimension for this length. 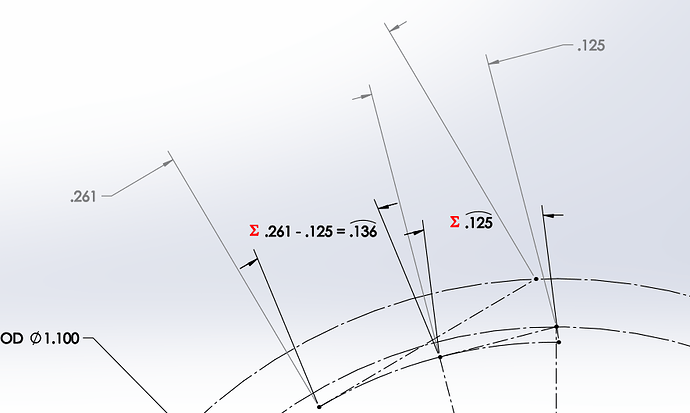 Now that we have the involute, let’s get started on actually modeling. 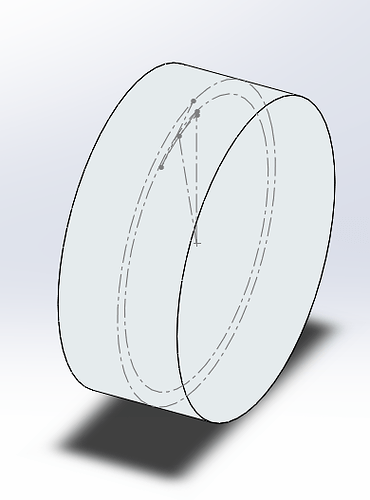 Gear Blank390×527 33.1 KB
I just drew a circle with diameter equal to OD and then extruded it out to an arbitrary width. 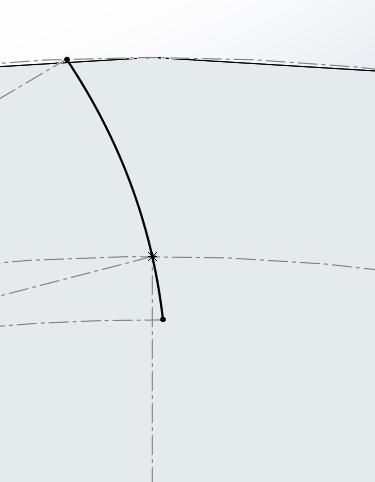 Now I fire up a new sketch, and use the spline tool to connect-the-dots between those three points we sampled on the involute. 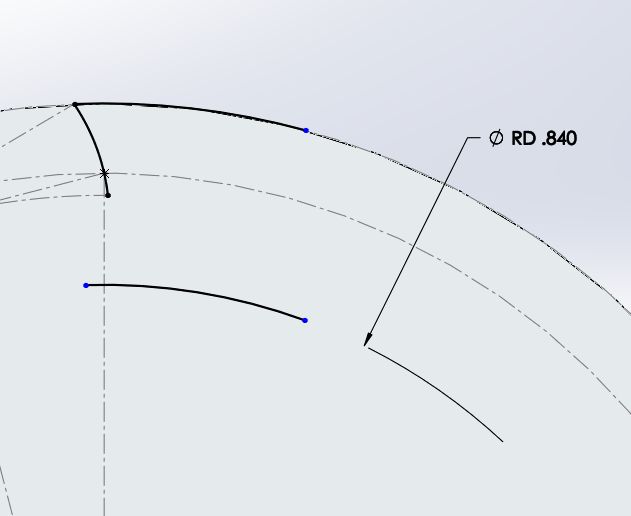 Many people skip this step and just draw a straight line. However, we can do better than that. Let’s go back in time, and make a new sketch to draw our undercut: 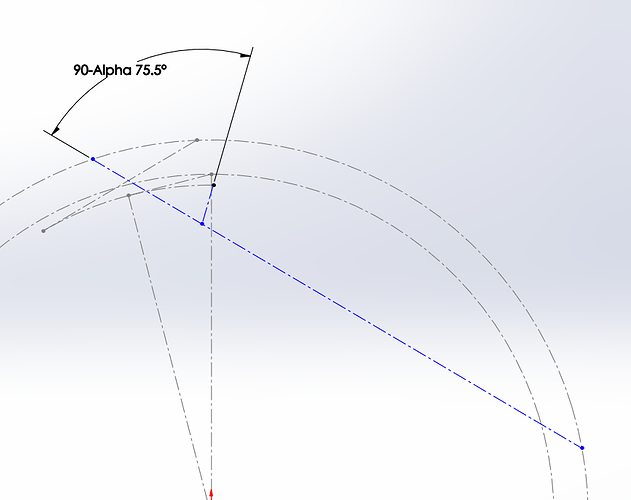 We first draw a chord on the inside of the outer diameter circle. This chord simulates where the top of a rack meshed with the gear would be at an arbitrary point in the rotation of this gear. We then draw a second line connecting the base point of our involute to this chord, and dimension the angle to be equal to 90-\alpha. This line simulates the surface of a rack tooth meshing with the gear. 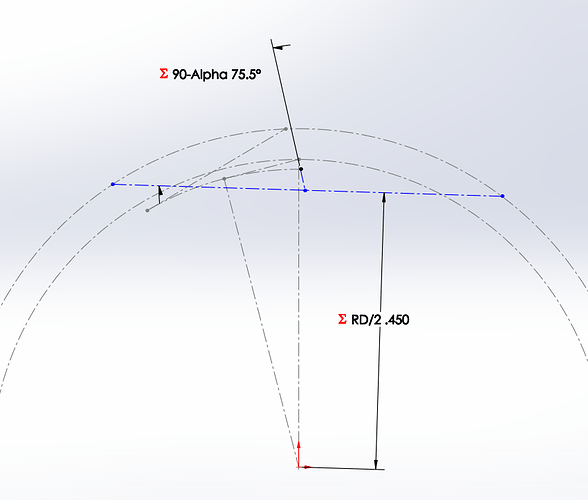 We then dimension the distance from our chord to the center as \frac{RD}{2}. This is is the distance from the center of the circle to the outermost face of a rack. Before we define things further, I suggest you drag this line around for a bit to get a feel for how the undercut is shaped. 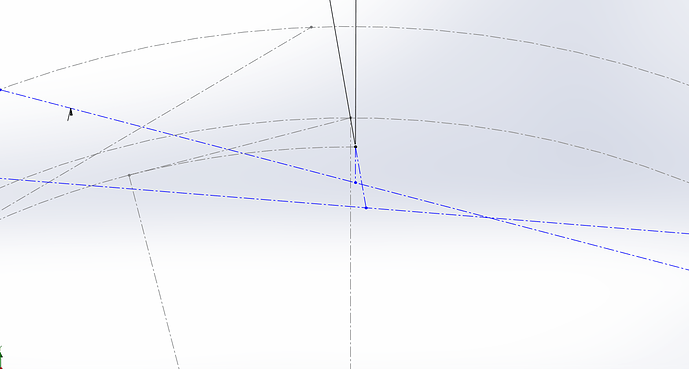 I then duplicate what I previously did, with the same angles and dimensions as before. This gives us another point to sample on the undercut. 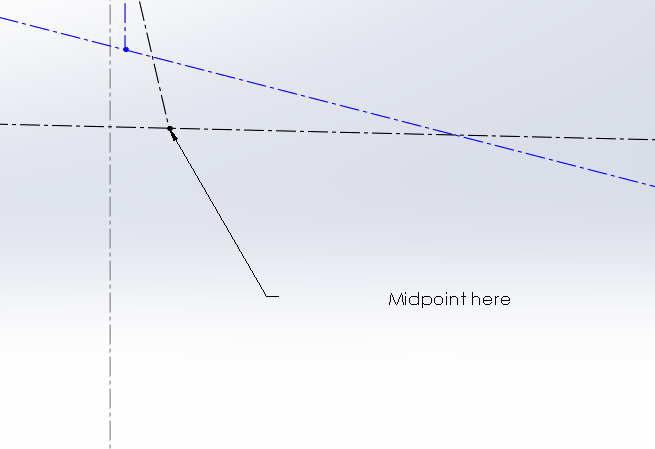 Now set one of the intersections of these two lines to be the midpoint of the chord. Setting it at the midpoint locates this point at the minimum possible distance from the origin, i.e. at the radius of the root circle. 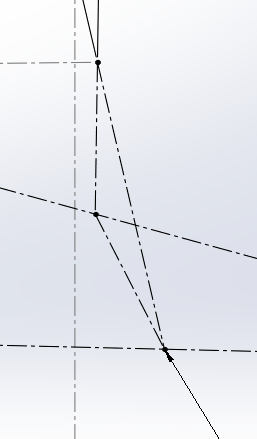 We then locate the second point more or less in the middle by using some construction lines and setting their length to be equal. If you want the undercut profile to be more accurate, you can of course sample more points. 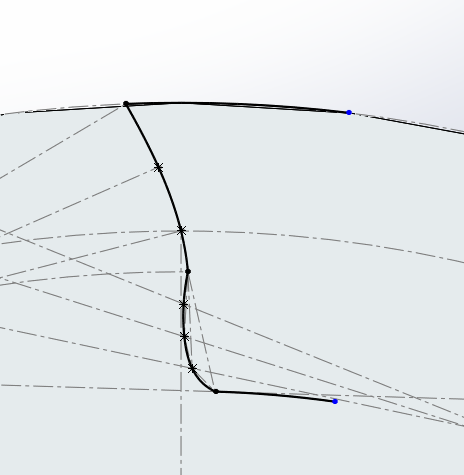 After a brief interlude, we can now continue. I went in and sampled more points on the undercut and involute since the curvature isn’t very well modeled by a 3-point spline. 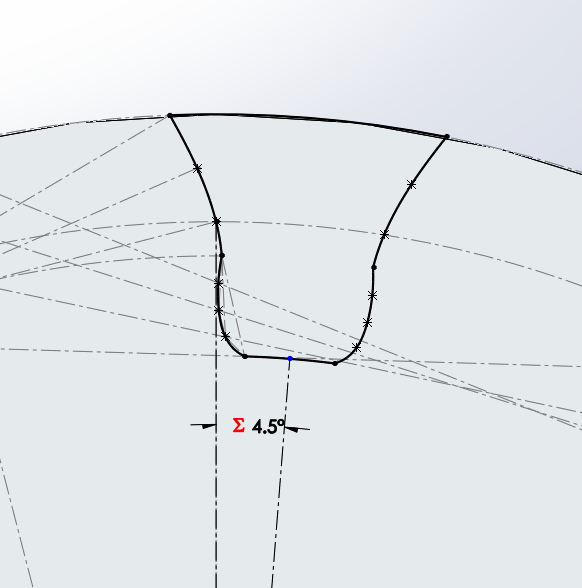 Full Tooth Profile582×588 29.5 KB
I add a construction line from the bottom of the curve to the center, and then a line from the intersection of the tooth and the pitch line. I then dimension the angle between the two lines as 1/4 of the angular size of a full tooth, or \frac{90}{n}. Lastly, I mirror my half-tooth profile to make a full tooth profile. 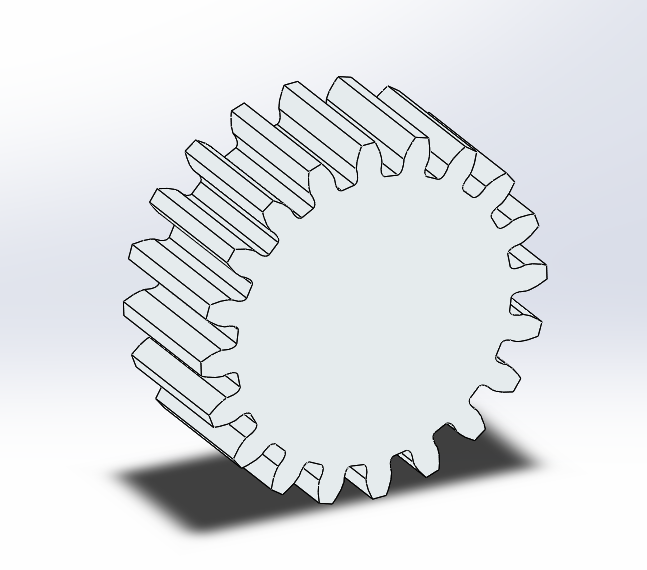 Lastly, I cut out the full tooth and then pattern it n times around the blank. Now you have a complete gear!

Thanks for reading this all the way through. If you have any questions, don’t be afraid to ask below. If there’s interest, I’ll write out how to do profile shifts as well. I’ve also attached the SW file I used to make this tutorial below.