Does anyone think we should have an animation award at IRI this year? All teams involved in the competition will have a chance to win the award. Please send feedback.

Will we need to make a new animation or do we have to enter the same animation as the first competition? Or are we allowed to clean stuff up?

Would it be the same basic premise as the first competition or something different?

A totally new animation is an insteresting idea, but I don’t think it is really practical. It would have to be decided on by all teams involved…or at least the governing committee that is organizing everything. I don’t know if anyone would even be interested in this.

I think this year’s animation would work, but the judging would have to be different than it was at regionals/nationals. We could even have our own honorable mention awards. I also don’t see any problem with tweaking things.

As for a premise…I think it should definately not a commercial be a commercial. Maybe we can combine a couple of the awards and have an Engineering Design Award, but have an animation detailing everything.

Really we could anything we want…as long as everyone agrees!

What about teams that didn’t have time and resources to submit an animation during the season? Could we work on one and submit it for IRI? We’ve got a few people learning Max right now, and I’ve always wanted to do animation, but I’ve always been too involved with robot construction to participate.

So it would be a few of us trying to organize the rest of the team and it might not work out to well.

That, and since it is summer, you are bound to have a lot less students actively involved with their team. A lot of seniors are leaving, freshmen are coming in… I don’t know if a lot of teams would have the resources (students) or the time to get a whole other animation done.

Maybe it could be optional? If you didn’t make an animation, or you think yours really stunk, you could make a new one, or you could just enter the one you submitted to FIRST.

Compromise is the key here. I know that summer is coming, but that also can mean that people have more time to do animation. I’m just seeing if there is any way to let team’s that want to create a new animation, and teams that don’t want to…are competitive.

I remember that at the last Rumble on the Rock back in 1999, they did an animation competition on site. All teams were able to send one, maybe two (don’t fully remember) team members to an offsite location (transportation provided of course) where they had 5 hours I think to work on an animation. They were given a theme there and could do whatever they wanted. I believe it was a 10 second clip that had to be produced and their theme was a planet fly-by (the winer had X-wings from Star Wars flying past a red planet ,similar to the scene from the special edition of A New Hope).

Since the competition is at a high school and not a civic center, maybe the school could open up their lab for something similar? There would be a problem if there is only one machine with Max on it though…in which case the contest could be announced a week before IRI and then teams would just have to bring their finished AVI. They could be turned in on Friday night, and then if possible, maybe a copy of all the entries could be made and given to all teams in attendance (or those that submitted) on CD. Just a thought.

What does everyone think?

I might also suggest an alumni animator division, for those of us college kids that were former animators that aren’t technically allowed to submit a real FIRST animation???

I believe the Rumble at the rock you could have 2 or possibly 3 students go.

i doubt on site would be possible because Lawrence North is not set up for that sort of thing, but you could always try.

Wow I really like this idea… both the using current animation entries that were submitted this year… and the only having a certain amount of time to make a video. The 2nd option would be very, very challenging.

Oh yeah, any you animators out there can check out this thread, we’re trying to start a Graphic Artists community and if you’d like to be a part of it let me know

HEY ALL! Well, i think that this could be T3’s chance to get the recognition that we think that we should get!

After the DQ we recieved, we were upset. But this makes up for it!

Let me know what you think.

We love light tracing. Only, it takes such a long time to render out. Ya know? That could be a problem. 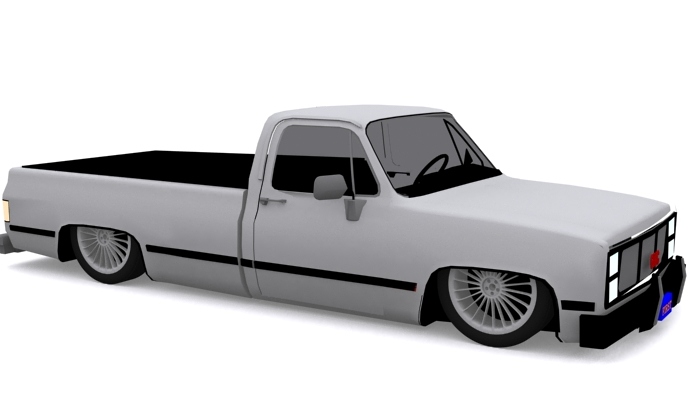 *Originally posted by magnasmific *
**HEY ALL! Well, i think that this could be T3’s chance to get the recognition that we think that we should get!

After the DQ we recieved, we were upset. But this makes up for it!

Let me know what you think.

We love light tracing. Only, it takes such a long time to render out. Ya know? That could be a problem.

Nice truck, can we say low rider??? Get some hydro’s (or water pneumatics) on that baby and it will be a sweet ride.

Is that an apple logo on the grill???