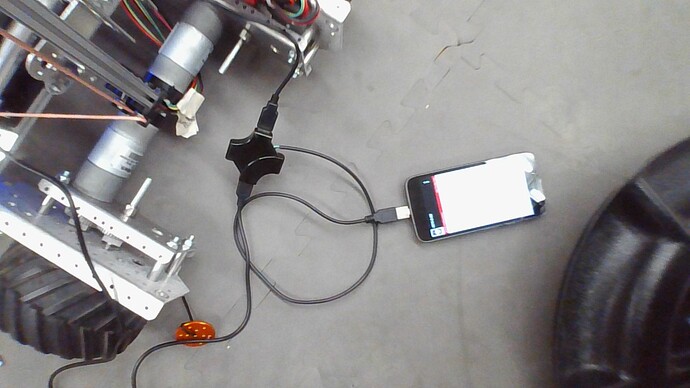 Is this legal? Thanks

I wouldn’t say so. RE08 in game manual part 1 only specifies that a smart phone device is connected to a exapsnion hub. In addition, I wouldn’t recommend this configuration even if it is legal, as USB connections are notoriously finicky when placed on a robot, and using the RS232 cable that connects an expansion hub to another will be significantly more reliable, as described here.

There’s definitely some ambiguity because RE15.C has a provision for using a USB-hub between the Phone and the Expansion Hub. I’d also agree with the commenter above me that RE08 is open to interpretation that the phone can only connect to one expansion hub, and that I would not willingly add more USB connections to the robot when there are other options available such as the RS232 connection.

If you’re looking for a definitive answer on this because you end up going this route, your best bet would be the FTA Q&A which would then give you a firm yes or no as well as something you can provide to inspectors at your event (assuming it is a yes).

In addition to the above… move to a Control Hub as soon as it is feasible. USB connections on the robot are probably the #1 issue that causes teams to not move in matches.

I’ve FTA’d for years in FTC and ever since we moved to the latest control system my job has been primarily helping teams troubleshoot why their USB connections came undone and what they can do to fix it. I’ve done 4 (small) events so far this year where the vast majority of teams are on Control Hubs and/or Driver Hubs and I can count the number of issues teams have had across all the events on one hand (bad connection to a phone on the robot, bad power connection between the battery and the Control Hub, minor static issue, and in one unique case a failed Control Hub).

This year I’ve really felt my job shift back towards ensuring field logistics run smoothly, maintaining the fields themselves, and overseeing the scoring process. And the biggest change by far is the removal of USB from most/all critical connections.

Yes, the only issue is that we’ve tried using the RS232 but it hasn’t worked. I think I’ll post another thread, but thanks for your advice.

This should be an RS485 port. If you’re having issues, be sure that the hub addresses are different. I think the addresses should also not start with 1 if you are using a double expansion hub setup.

If it were actually possible to BUY a Control Hub at any point this season I know my teams would have, but they’ve been out of stock since September. Currently expected back in stock in January, though that’s like the 6th or 7th time the date has been pushed back, so who knows.

Now I’m seriously starting to wonder if the new FRC control system we preordered will be delivered before April at the rate things are going.

They’re still available via the FIRST Storefront last I checked.

You’ll also note that I very clearly said “As soon as it is feasible”… there are a lot of reasons a team might not be able to get a control hub, including budget and availability issues. It’s still something I recommend any team make whatever their best effort is towards doing.