Is it time to switch to the Round Robin format at Regionals and Districts?

As someone who wasnt around before RR on Einstein, what are some more prominent examples of this?

@Jared_Russell I think that the disadvantages you’ve listed kill a round robin as a desirable tournament structure.

Some requirements I would have when changing the tournament structure: 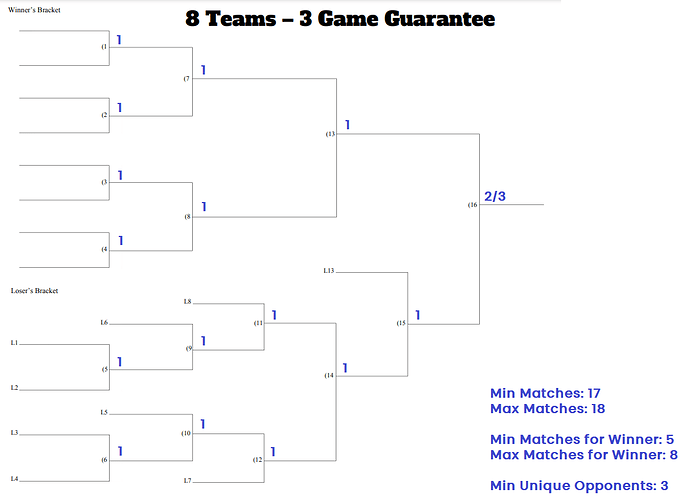 I think that this structure does basically everything everyone wants, and follows all of the above rules. It does have a slightly more complex bracket, but that could easily be mitigated if the bracket image was put up on the screen with the team numbers filled in shown between matches (similar to how alliance selection is complex, but easy to track with an image to help.)

Maybe we try this at Chezy Champs instead of a round robin?

edit: updated recommendation to make the finals “first to 3 losses”. This allows the finals to remain multiple matches while advantaging the alliance in the winners bracket. Going to a 5th and final match when alliances are winning back and forth would be epic.

It’s not just the #1 alliance, anyone who makes it to the grand finals from winner’s side now faces a “single elim” 2/3.

Or put the other way, someone who goes to the losers bracket gets to lose more matches over the course of the playoffs and still win.

I think its antithetical to the idea of double elimination to wipe the slate.

I guess you could also mix and match - Grand Finals is 1 match between Winner Bracket Winner and Loser Bracket Winner, if LBW wins the 1 match putting WBW into losers, then settle it with a 2/3, otherwise WBW is the grand winner.

edit: much better would be finals as first to 2 losses. This allows the finals to remain multiple matches while advantaging the alliance in the winners bracket

This would make the most sense (equivalent to “a grand finals of 1 or 2 matches (if the losers bracket wins the first of the 2)”) to not make the event take too long, but I worry about people getting up in arms that it feels anticlimactic.

The finals were ALL #1 vs #2 ( that game may have been the issue, but upsets rely on a certain level of luck, luck is hard to sustain over a lot of round robin matches).

If you’re looking at the playoff advancement in TBA, that’s because everyone is sorted by the average score, it isn’t listed by seeds. You need to cross reference the seeds. For example, 2015 Carver was 4 vs 7 in the finals, Galileo was 2 vs 6, etc.

HAVOC, an offseason run by 708, has done this in the past. When I attended HAVOC it was a blast to watch and to participate in. Does someone who has been to HAVOC more times than me have more perspective? Running stuff at offseasons is a great way to trial run for the competition.

(Given that this thread has racked up 50odd responses in 3 hours I haven’t been able to read everything and I suspect that I won’t be able to catch up - I did look through to see if anyone said something similar, but my apologies if I missed it.)

I have some other thoughts, but first, I just want to pull up this throwback to when FIRST dove headlong into the double elimination abyss in the 1v1v1 days. It’s a wonder anyone made it out of this thing alive.

I could be sold on a round robin if the first tiebreak after W-L-T was head to head W-L, as opposed to score based metrics.

There must still be 8 alliances of 3/4, we need to allow at least the same number of teams on the field as there are in the current elimination bracket. 6 alliances of 4 is not good enough because 8 fewer teams are actually “on the field”.

8 alliances of 3 = 24 robots.
6 alliances of 4 = 24 robots, of which 18 are guaranteed to see the field–and it might be relatively trivial to require all robots to play at least once. (NOT once per round, but once through playoffs.)

Under the 6alliances of 4 with a single forced play. Realistically (assuming in most parts of the country you only play your 4th when forced) 6 of the above robots only get to participate in 1 match rather than 2.

Under the double elimination bracket, 24 robots get to participate in at least 3 matches.

I was thinking about something along these lines (making the tournaments more interesting). My thought was what if we just didn’t allow captains to pick each other? You could also change champs qualifications to be first and finalist captains if you really wanted to reward the teams that did better.

Nope. Nonstarter. Number one rule of any type of competition design is that you cannot incentivize throwing matches. Not allowing captains to pick each other just means that teams who know how to control for it will be encouraged to lose and fall outside the top 8 to get picked first.

I looked at your double elim bracket more carefully and saw that it’s actually triple elim for the teams that go 0-2 immediately. Intentional just to get 3rd plays?

Edit: With (I assume) the intention that you give some moderate bonus for being a higher ranked alliance (i.e. that you should win your first match and play on the winner’s side) without that being a death sentence for 5-8.

Realistically, I think only Regionals and District champs could facilitate enough evenly matched alliances to make the format work.

Does it matter if they are evenly matched of not? The better alliances should still win and go to the finals but it isn’t a death sentence for alliances 4, 5, & 8. All teams in elims would get >2 plays vs some getting knocked out in 2 in the current system.

I think triple elimination may be better, though more complex, rather than 3 game guarantee. Teams that go W-L-L only get 3 matches, where in the standard format they’d have 4 matches. If they go W-W-L-L, though not for sure.

Admittedly, I didn’t expect this to be viable and thought of this myself. It’s just that at most events (I’ve attended) the top 2 robots are always much better than the rest and it is rare to see any upsets. I’ve only ever really attended regionals though. Switching to districts might help with this issue.

A. If we are trying to advance the best robots, then allowing the 2 best robots to pair up makes sense.
B. Round robin allows the 2 best alliances to go the finals without getting knocked out by any 1 alliance.