A friend stumbled upon this wonderful little site that will take any image (it can be small) and turn it into a PDF file that you can print and turn into a gigantic artistic mural (of geekdom in my case).

When thinking of what I could possibly put on my wall that would be entertaining and stunning to passers-by… a 16ft wide, 8ft tall keyboard was very appealing. It took about two hours and three rolls of two sided tape, but it was worth it. It brings a comforting touch to the blank walls of my room. Of course, I could have made a huge FIRST logo, but this is just my summer dorm. I’ll do that in the fall when I move back to my tiny double.

Fun! Wee! An amazingly large replication of my avatar.

Um, yeah, but that’s a lot of pages to print.

I’ll probably do something serious with my dorm walls though.

http://www.1337krew.org/upload/user_files/mural.jpg
Team 1388’s robot, Zippy, turned into a 42" by 63" mural on my bedroom wall with the Rasterbator. w00t. If you like it, go leave a comment on it at DeviantArt. Thanks for telling us about this, generalbrando.

This is a cool website. I’ve already got a few images ready to be printed out tomorrow. I’ll post some pictures later this week of my creations.

If I had room on my wall, you can bet you’d see a giant pic of buddy jesus up there (I’m still considering putting some FIRST related object on my closet door). 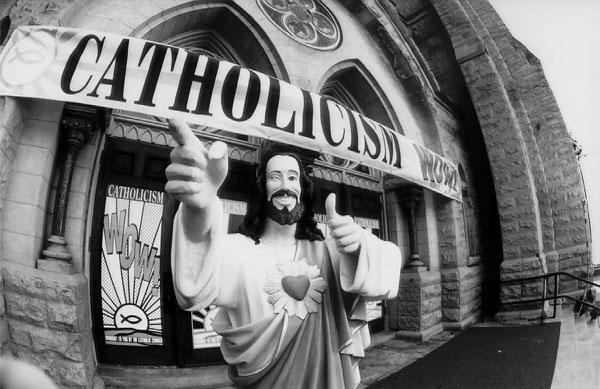 This is awesome… I’m planning on doing up Blue Man Group in the Pipes photo as soon as I get back to school. I can use their printers for free.

alright, so exactly how many pages are those two pictures posted? how much ink did that take up?

alright, so exactly how many pages are those two pictures posted? how much ink did that take up?

Mine was 30 pages. I printed it on my 120 pound industrial laser printer, which is meant to do such things. (I have no idea why we have this behemoth in our house… this is the first big job it’s ever done.)

That is an awesome site! Cheap decorations. Thanks for sharing it.

I recently acquired a color laser printer so once I have it set up I might make a giant FIRST logo. Rasterbator does do color too right?

I recently acquired a color laser printer so once I have it set up I might make a giant FIRST logo. Rasterbator does do color too right?

Ha, i was thinking the same thing cause i have full access to almost any type of printer that you can think of, and when i was looking at it, i guess the designer didnt think anyone doing this in color (or colour for steve :D)! Though there are a few people i know now since this being brought to our attention, are working on a color version of this…

Whoa whoa, yall are totally off topic- rasterbation is WRONG! One shouldn’t rasterbate, but I did yesterday…

tested a small 6 page west coast choppers logo, it came out sweet… next year I’ll have to print 30 or so pages at RIT for my ceiling :P… I wonder what others will say when they see a daisy on my ceiling, the women might just love it

So I think we’ve all reached a new level of geekdom.

Rasterbation is not wrong! In my case, the keyboard I made is about 170 pages, but I eliminated the last row because it was just blank in the original. A few tips if you’re going to be making large ones like this…

Two sided tape rules. Put an extra piece on the wall so that all four corners that meet everywhere will be on it. Of course, put them up with a few pieces on the back. But if you put the extras on the corners, it finishes up nicely and you don’t see any tape. Also, you might want to separate the rows into piles so you can do it left to right, or just a column at a time, or whatever. Rather than left to right top down they way it prints. There’s also a forum on the rasterbator site for more tips. High contrast images work best of course.

Also, dez and I have been plotting a little. What if you split the FIRST logo into several pieces and rasterbated each into the largest possible size. Then put them on posterboards and made a gigantic (we’re talking like 100 ft wide) logo in the stands at nationals? Somehow I doubt FIRST would take it down.

This is awesome… I’m planning on doing up Blue Man Group in the Pipes photo as soon as I get back to school. I can use their printers for free.

i did one too of my car, not really robotics related though 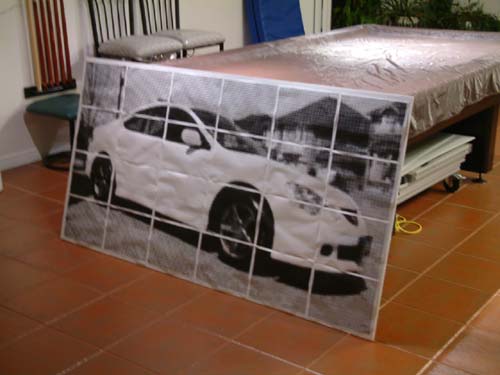