Using PhotonVision and 3D, I’ve managed to get the robot to be able to align to an AprilTag target at-will. The camera that I’m using for PhotonVision is offset about 5 inches laterally from the center of the robot, and I have accounted for this by adding a constant camera-to-robot offset. Everything works great, however, the robot is consistently ending up 6-7 degrees clockwise from “square” to the target. I feel like I’m missing something obvious…

Here’s a video demonstrating this. The robot is intended to be touching the red tape at the end, square to it.:

The main part to look for is the part after it stops the first time, as that is a dynamically generated path through the AprilTag data.

Also of note: when I removed the camera-to-robot offset, it aligned square every time. This only occurs when I add the offset, which leads me to believe it’s something with that.

To clarify, what are you actually trying to do and/or what is your goal? I think I know a better way to do this (which is less error prone) but need to know what you’re trying to do.

At a high level, what I’m trying to do is run a “crude” pre-planned path to get to around the correct point, and then using data from an AprilTag (such as camera-to-target transform) to align the robot very close to that position. The correct point is the red tape (as in, edge of bumpers just barely “touching” the tape).

Gotcha. I recommend using PhotonPoseEstimator (which takes in your robot to camera transform, accounting for your offset), and then follow how we have our AprilTag code example setup to use it. Then, use the pose you get PhotonPoseEstimator, feed it into a drivetrain pose estimator, and then use the pose from your drivetrain pose estimator to generate a trajectory from your current position to your target position.

If you want, I could try and debug the actual issue you have (could be quite a few things), but the above is the reccomended/ better way to do it in my opinion.

I’ve never been able to get a pose estimator to work. Whenever I input a non-odometry pose, it never does anything… I’d honestly prefer to figure out what’s wrong with my current implementation (or, what value I’m missing?) that’s causing this issue. 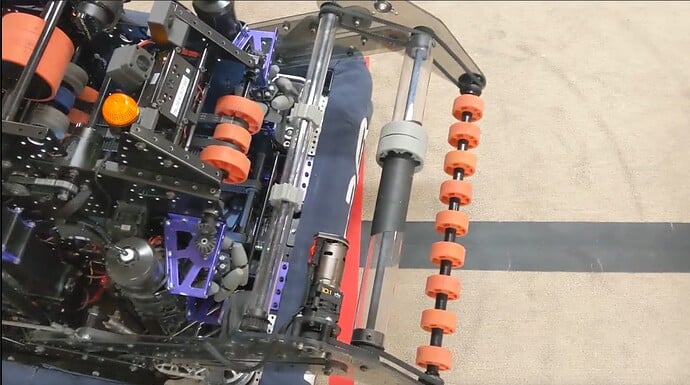 Those cameras are not the ones I’m using. It’s taped and bubble wrapped to a pole at the top. Should have clarified, sorry. That camera is 5 inches to the left of the center, making it +5 in the Y direction. Here’s a picture for a better view. The center of the robot is approximately at the big orange wheel. 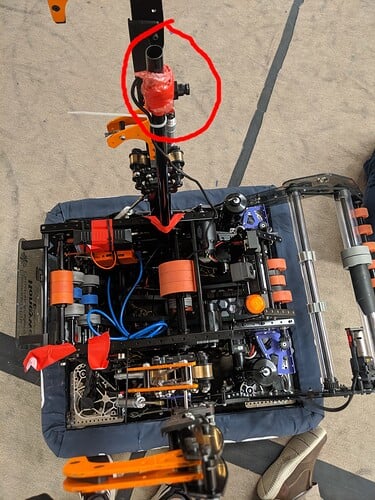 In that case, yeah I agree that the robot to camera translation should be 0 in X and 5 in Y.

Wait, I think you may be conflating the two. Check you aren’t mixing up camera to robot with robot to camera anywhere in your code?

Sure seems like you’ve got it backwards here to me?

I guess I named it wrong. However the end result is correct as it lines up correctly in the Y direction, with the center of the robot being in front of the AprilTag.

Turns out this was a red herring, the Theta PID controller was tuned wrong.