I’ve used this picture a couple times in recent days … used to help provide advice on joystick buttons and throttle.

Now the shoe is on the other foot and I’d like to ask for some advice.

I wasn’t the SW mentor last year, but I seem to remember a VI/block that let you detect the rising edge of a joystick button. I can’t seem to find it in this year’s LabView installation.

In the linked picture, buttons 3,4, & 5 are used to determine the next state of the Drive state-machine. The image shows some code from the Normal Drive state. When 3 or 4 or 5 is pressed, I set some variables and the next time through the loop, the state will change to the next state. After the maneuver is complete, the state goes back to Normal.

Problem is, if the driver leaves their finger on the button, then it will only stay in the normal state for one cycle, then immediately transition into the maneuver again, over and over and over. I’d rather require the operator to press the button again.

It’d be a lot cleaner if I could simply drop a box in there that would detect the rising edge.

Any tips/tricks/advice would be greatly appreciated.

Here’s what we did. http://forums.usfirst.org/showthread.php?t=10544

Take a look at the Joystick Button Latching example we added this year. It will show you how to do it. Once you understand it, you may want to create a simple subVI that can be put in a loop to do the same thing.

I use a feedback node and a tiny bit of logic to get a single “true” pulse output when the input changes from false to true. It’s so simple that I don’t feel a need to encapsulate it as a vi.

All very good advice. Thanks.

The Labview example is good … but it’s a latching toggle … and I’m in the market for a one-shot. I could use that structure to create a one-shot, but I’d prefer a more elegant solution.

I’ve never used one before, but wouldn’t a simple feedback node be able to help me. That is, I’d only enter into the new state case if the button is TRUE now, and was FALSE the last time thru.

I’ll play with it at this afternoon’s session and report back later.

[edit] … Nice one Alan! That’s exactly what I was picturing in my head.

Here’s a code snippet (picture) that does what you want. You could put this in your loop, or you could make it a subVI. If you make it a subVI to be used in multiple places, be sure to make it a reentrant subVI. That way it will allocate separate memory for each call. To make a subVI reentrant go to File>>VI Properties>>Execution and choose Reentrant execution. 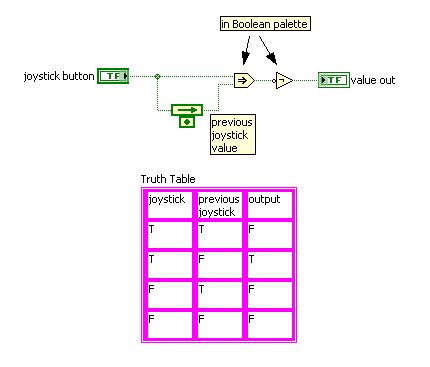 I don’t have access to Labview at the moment … what’s it called?

I don’t have access to Labview at the moment … what’s it called?

It’s an “implies” gate. The output is FALSE only when the first input is TRUE and the second input is FALSE.

[shrugs] It might do the same thing, with the same number of gates, but it’s easier for me to read the simple “AND” with the previous inverted value. 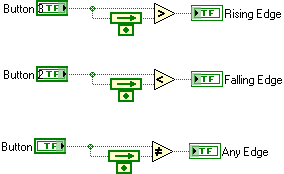 That certainly is elegant.

Theres also a VI in the OpenG toolkit, (can be acquired through the VI Package Manager) which is called “Boolean Trigger” it takes a boolean in, and has a rising edge and falling edge output.

I never much liked Feedback nodes… They make it difficult to comprehend whats going on. To me a shift register makes more visual sense, despite being functionally the same.

Is there anyway to use a limit switch to stop a motor and then be able to restart with Joystick?

Is there anyway to use a limit switch to stop a motor and then be able to restart with Joystick?

Do you mean to use the joystick to move the motor in the opposite direction, away from the limit? That’s easy. Just have the limit switch keep the motor control value from going less* than zero.

Or do you mean to use the joystick to cause the motor to ignore the limit and go past it? You can do it, but it goes against the usual purpose of a limit switch, and I’d have to know more about the system before giving any advice.

(* or greater, depending on wiring)

I never much liked Feedback nodes… They make it difficult to comprehend whats going on. To me a shift register makes more visual sense, despite being functionally the same.

I agree, I use Shift Registers far more often than I use Feedback nodes because I too find the feedback node harder to comprehend.

Posted is another way to implement a Boolean Edge detect that 1075guy speaks of. 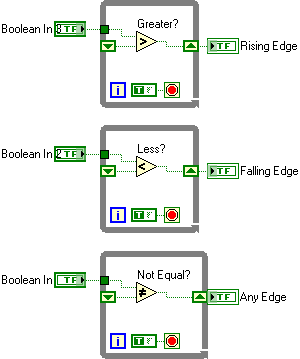 Just in case someone needs a Flip-Flop latch for a boolean.

On the response to keep the limit switch with the motor going value from going less than zero? How do we do that?
Software kids are stumped!

On the response to keep the limit switch with the motor going value from going less than zero? How do we do that?

Using the “In Range and Coerce” function makes it easy. The attached image shows the True case, where the value is to be limited. The False case simply wires the value straight through without modification.

Really frustrated!!! We are close to throwing in the towel. Alan you keep saying this is easy, but we have spent countless hours over the past two years trying to get a switch to stop a motor without any success…it may be easy for all of you in this forum but I guarantee that we are not the only ones having this issue. We have been relying on the graciousness of Chief Delphi and LVMastery to get our robot programmed.

Can anyone write and attach a sample program with ALL of the elements included.

We’re not trying to cop-out we just need to see and example to understand the thinking behind what we are trying to do.

Using a speed controller or a Spike?
Is the motor driven full speed in forward and reverse, e.g., on a Spike?

Does button 2 interrupt what button 1 started, or is the button 1 action stopped solely by the limit switch?

How do you want to stop after button 2 is pressed? Is there a limit switch at the other end too?