We are using a screw drive to boost our mechanism the last bit to the highest hole for the balls. This there a way i can use the JVN Design Clac to figure out what motor would be the best?

Yes. A lead screw is just another gear reduction that you can apply to the linear actuator sheet.

What would i put in for pulley diameter since there is not a pulley?

I don’t know enough about our system to set it up totally, but chances are you can adapt it to use a simple linear or rotary system and use the JVN calculator to help select the motors

Use some formulas for a screw jack.

To figure out what torque you need to apply for lifting.

You could calculate an equivalent pulley diameter for a lead screw based on the thread pitch.

For instance, using 3/8-16 threaded rod as a lead screw would give you 16 threads per inch, or 1/16 inch stroke per revolution.

If you do this, then the gear ratios put into cells C12 - D15 would be for just the reduction from the motor to driving the lead screw.

Here’s an example, with 10:1 reduction driving a 16 threads/inch lead screw. Linear speed is around 2 inches per second. 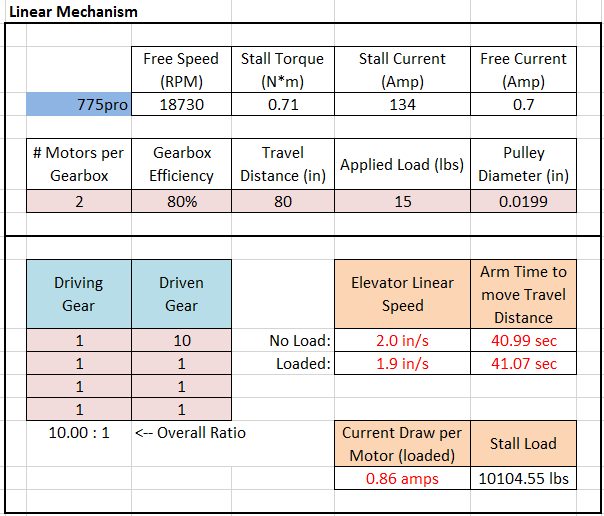 Just a note: If this were for ACME Lead Screws, you would need to de-rated this by sometimes up to as much as 85%. There are online calculators to help with this as this is like a CNC machine lead screw. I do not have a good feel for standard screw values. The efficiency numbers I have gotten for 1/2" lead screws are between 15% to 30%. Now you have PLENTY of room and I do not think you will have an issue. But understanding how much friction you must overcome is a significant exercise for this type of mechanism. This does not include losses in your gearbox.

So I played around with different efficiency numbers in the JVN linear spreadsheet, and realized the ‘current draw per motor (loaded)’ field does not reference gearbox efficiency at all. Changing between 1% and 100% shows the same current, which obviously doesn’t make much sense. This seems to be true for all the mechanism tabs.

I’m also not the first one to notice this issue.

It sounds like @JVN has a new version in-work. Maybe he can fix the current draw mechanism calculations to include efficiency as well for the next release.

What a coincidence! I’m working on adding a leadscrew calculator to my design spreadsheet and I noticed the same thing.

I just sent JVN an email about it today. He hasn’t responded yet, but I expect that it was just mistakenly omitted. If you don’t want to wait for JVN’s next release, you can fix it yourself by adding “/D8” before the plus sign at the end of the motor current equation.

See Jared’s comment regarding the efficiency calculation in the JVN calculator:

I am pretty sure the current estimates in that calculator are calculating “holding” current for the load you specify. It is correct not to take inefficiency into account for this calculation; all that inefficiency is helping to hold the load. A 20% efficient transmission or a 100% efficient transmission will require the same amount of motor current to keep the same load stalled (all else being equal). Friction is pretty great, except for when it isn’t. A lot like gravity.

Ah, that’s an interesting note. Having it represent “holding” current could make sense for an elevator or arm - but less so for the ‘intake mechanism’ tab. Generally intakes would be running continuously until the gamepiece clears, not stalling in a loaded condition.

Given directly above, the table shows actuation speed ‘loaded’, it’s not intuitive that the current draw loaded would not be at speed.

Perhaps there just needs to be a note clarifying that it’s current at stall, and maybe the enhancement is to add current draw while moving under load as an additional field?

Also interesting that the stall load next to the current draw is affected by efficiency, essentially showing the max load that can be overcome to get moving given the gearbox efficiency.