Labeled images for cones and cubes

Team 88 has collected over 6000 images of labeled cone and cube images. I don’t know of the best way to share these images with the community. The compressed tar ball is 27.5 GB! Does anyone know of a preferably free service where I can post this file? Is there community interest in sharing our labeled data in one place?

Where ever these images end up, I’ll also post the neural net we trained from it. We use yolov5 v7.0 and pytorch, similar to last year. 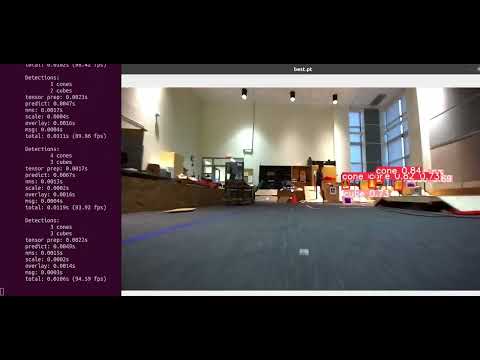 Easiest free thing to do is to host a torrent of it.

Hugging Face is great for posting datasets and models. I’m surprised I haven’t seen any FRC tes sharing there.

awesome suggestion! Here is it: We’re on a journey to advance and democratize artificial intelligence through open source and open science.

and as promised the model demo’d in the video:

Zenodo is a CERN project that will host large repos for free. Although I am not 100% positive on what qualifies.

Hey, this is awesome, thanks for sharing with the community! About how many epochs did it take to attain an accuracy you were happy with?

What would be an easy way to run that model on a Google coral accelerator? We ordered one a few days before kickoff and I’m still trying to figure out if it will be useful for this kind of task or not, and then try to get our hands on a Xavier NX

I’m not sure if I’m doing something wrong but when grabbing the dataset down from hugging face all of the text files that should contain the annotations are blank but the images download perfectly fine.

It works fine for me when I redownload it. Are you using git with LFS installed? I’m on Ubuntu 20 using git on the command line.

I was downloading it through hugging faces API which might’ve been the issue, I’ll grab it through git after adding LFS, thank you

Is the Jetson Xavier NX going to be a legal part this year? I got one a couple years ago and didn’t think it would be a problem when I saw you were using it, but looking at current prices and availability… I’m not sure it gets under the FMV price limit.

Availability and current market (aka scalper) prices don’t determine FMV, the vendor does:

The FMV of a COTS item is its price defined by a VENDOR for the part or an
identical functional replacement.

So assuming you’re using the Jetson Xavier NX development kit, nvidia’s list price for that is $399.

You wrote 27.5GB but the dataset that I downloaded from hugging face is only 3.96GB uncompressed?

I know @Brandon_Hjelstrom was looking for images too. Maybe he will see this post and include them in his limelight training.

This dataset is great!

Our team has also been experimenting with using the Jetson Nano. We like to use the Jetson Inference library but there is no official support for YoloV5 yet (as far as my research goes), I was able to re-upload all of the photos from huggingface to Roboflow here so we could test it out.

With this tool, you are able to download the dataset in many different download formats. We use the Pascal VOC format, but one thing to note is that RoboFlow exports in train valid and test folders which is different from the official folder structure used, but with a quick python script we were able to reorganize everything in the correct manner.

I mixed up which files my archive contained. I had made a back up of every image we’ve taken (labeled and unlabeled). This set is substantially larger and that’s where the 27.5 GB came from. I’ll see if I can edit the original post.