I realize it is late in the season for something new, but…

Here is a link to a LabVIEW library, sample robot projects, and utility programs that implement the FRC WPILIB ramsete, spline, trajectory, and associated routines in LabVIEW. While the library, utilities, and robot projects have been tested, this should be considered “beta” software.

The following are included:

Here is a link the zip file with these projects.

Here is a sample screenshot of the trajectory creation utility. 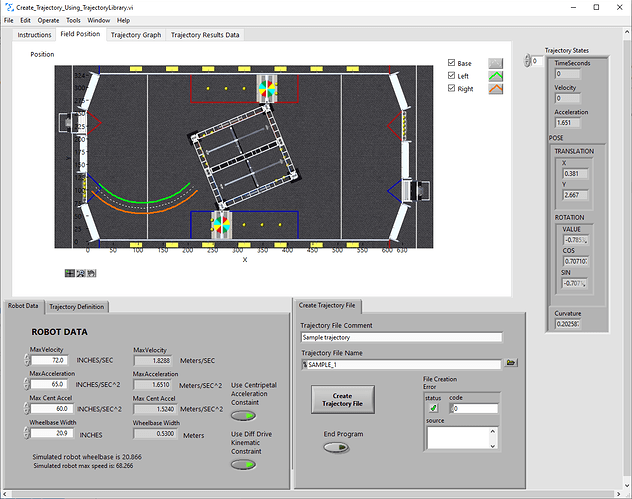 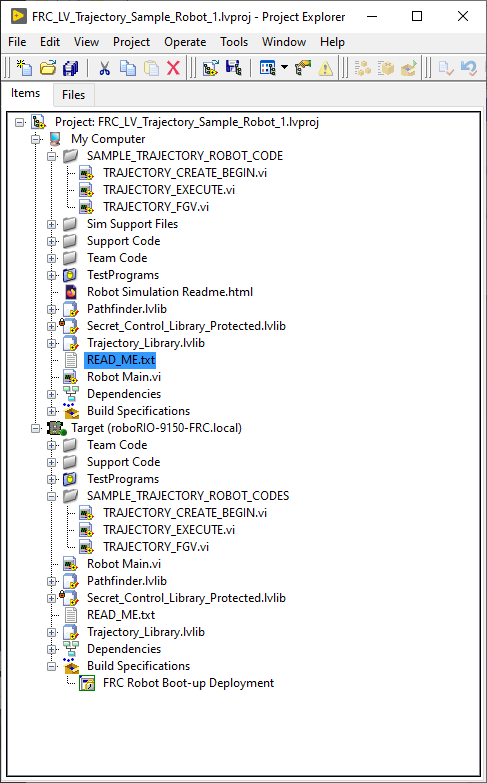 Here is a screen shot of the trajectory create front panel from robot sample 1. 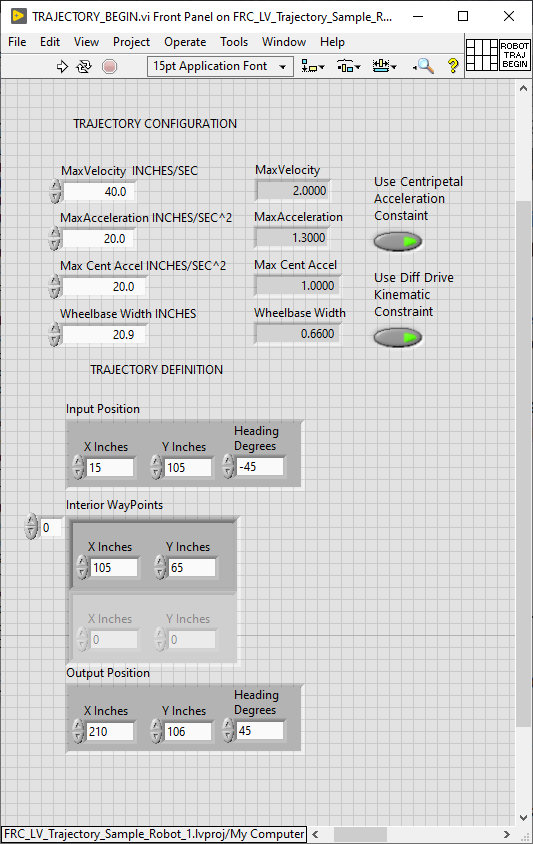 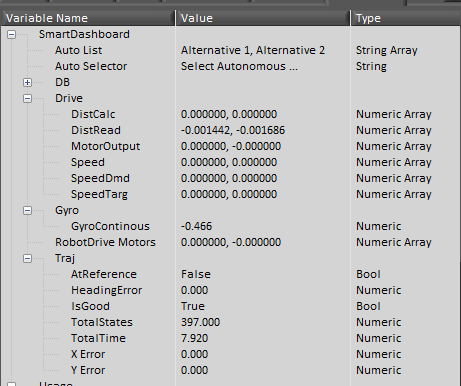 Finally a screen shot of the Trajectory library 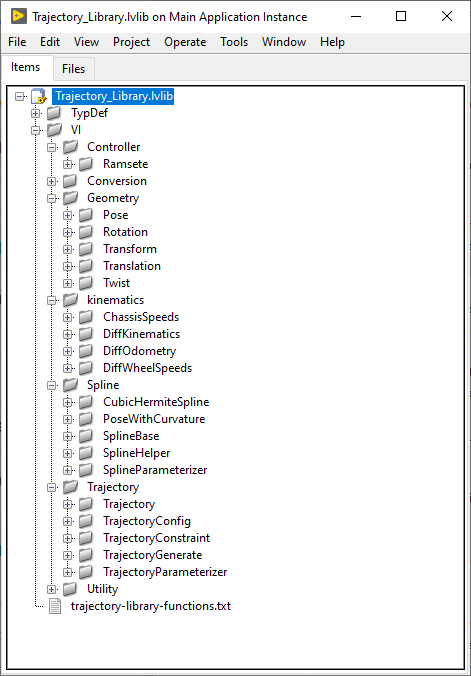 The VI documentation is incomplete, but the routines closely follow the C++/Java implementation.

Hopefully this will end up in a chapter in the Secret Book of FRC LabVIEW.

Hello everyone Here is a link to version 2.07 of The Secret Book of FRC LabVIEW https://drive.google.com/open?id=1th-nq47T9rfA-Q3k04qZ8FKV4EFaiZaR This book is intended to provide an introduction to LabVIEW, and a lot of information about control system logic design, architecture, and a lot more. If your team doesn’t use LabVIEW, this book contains a lot of control logic related items that may be useful to you as well. The original book dates back to 2014. This version has been updated for…

Truly excellent work. Thank you for making this resource available to labview teams.

Thank you for the work put into both of these resources. I have been trying to find a good labview way of doing motion profiling and this will help us in the future. The book will be great for training our kids and also my future development.

Well… I found a bug in the trajectory creation utility that used pathfinder. At the beginning and the end of the trajectory, the distance between samples was too small causing a divide by zero error when executing the trajectory file. I updated the utility to remove trajectory samples that are too close together (keeping the first and last sample). The zip file on the google drive has been updated. If you happened to download the original, I suggest getting the newer one. The link is the same.
Jim S.

Any plans on releasing a version of this that will work with swerve?

Hey Jim - I was looking through the code and noticed that the VIs to set motor power were in periodic tasks, not teleop. Our team has always put these in teleop - is there any reason to put them in one versus the other?

@BCR-Jim - So I don’t know much about swerve drive. I also haven’t thought too much about next steps. I thought I would maybe 0) concentrate on getting the teams I help through there competitions… 1) fix bugs anyone found, 2) document the VI’s, 3) set the VI properties to make them more efficient (subroutine, and inline where useful), 4) implement things more of the things that were left out. For 4) I was thinking of the missing differential drive constraint; maybe adding an acceleration limiting constraint like pathfinder has (“jerk”), although I’m uncertain it this had real world benefits or not (I think it might); seeing what others thought would be useful – like swerve drive or whatever. I’d also be happy to have help with the implementation…

@MazeOfEncryption - On a different subject, the through bore encoders work really nicely…

There are a couple of reasons for putting common code in Periodic Tasks and using global variables with wrapper subVI’s to write “demands” to the the Periodic Tasks code.

I have been teaching Acquire, Decide, Act method. (Acquire reads, scales and filters sensor values – include joysticks. Decide uses this data to decide what to ask each system to do – what drive speed do we want, what elevator height do we want, what ball shooter/gatherer system mode do we want. Act takes the desired things set by Decide and runs the low level control code, rate limiting, position control, state machines, whatever to turn these demands into actuator outputs (motor demands, solenoids demands, etc…) This makes it easier to compartmentalize the code and allows more people to work on coding.

The detriments of this separation are perhaps a little bit of extra latency. (at most 20 milliseconds). Generally this didn’t seem to be enough to worry about.

In the end – either way would work okay.

Ah, that makes a lot of sense. I didn’t think about the fact that periodic tasks would be running during auto too. Thank you!

Edit: Also, what about through-bore encoders?

If I have your team correct, I noticed your robot at the GOS week zero event. Specifically noticed the through bore encoders. We ended up getting these to help see what our shooter is doing and control the speed. (We were the team scaring others with our shooter… I hope we have some of the that fixed.

We were at the GoS week 0 scrimmage, but our team doesn’t have any through-bore encoders on our robot. I’m from the Titanium Titans.

Awesome to see more resources like this developed for LabVIEW teams.
1712 built our own path drawer to work with our pure pursuit controller in 2018. The lead programmer on that effort (now an alumni) wrote a whitepaper on the effort. The actual code can be found here, and here are specific links to the robot simulator, pure pursuit controller, and path drawer.
Huge thanks to 2168 for supplying one of the underlying algorithms and for 254’s 2014 autonomous routines being the original inspiration to implement pure pursuit and motion profiling.

I did a bit of black magic with property nodes…

Our team is playing with your trajectory generator and follower code. I have to say - this is some awesomely clean LabVIEW code.

If we weren’t locked out of the school, we were planning on getting it running on the robot this weekend.

I had a couple questions. Is the ‘reverse’ function of the WPI trajectory code in there somewhere that I missed? Or are running backwards trajectories not implemented?

Next - what’s the difference between Max_Velocity and “Real Max Speed”?

Last - is there an easy way to remove a point once you’ve added it?

We were planning on hacking in a swerve trajectory follower in as quickly as possible in the leadup to our competition scheduled for this weekend. Under the circumstances, I might now do a proper port of all the WPIlib swerve and mecanum classes, following your style.

Sorry, I haven’t looked at this in a couple of days.

I’ll try and answer your questions.

Then the trajectory is divided into individual wheel demands. If any of these exceeds “real max speed”, an indicator lights shows this. Max speed can be reduced and the trajectory re-created. (Not a very elegant solution, but it worked for me…)

If I misinterpreted the questions, let me know. Hope this helps.

Let me know if you are interested in the newest version of this code. If so, I’ll try and I’ll package and post.

I really briefly looked at the swerve stuff. It looked like some or all of the following three classes would need to be implemented.
Kinematics directory

I’ve made some significant changes to the libraries. I’ll try and post the updated code so you can use that as the base.

If you implement the swerve, I’d really like to include it with the rest of the library if you are willing to provide it.