I’m wondering what the teams thought of the LED flashers this year, instead of the revolving dome light.

From a spectator/ref view, I found them very hard to see. I didn’t think they were bright enough, especially since many teams put them in strange/out-of-the-way places.
They are also very hard to see once the match has ended. When the robot is disabled they only flash every 5 seconds or so. I’m sure this could be changed with a simple adjustment.

I thought they were a step in the right direction.

I agree with everything you said, especially the after-the-match-ended flash rate.

I know you are asking for opinions, but here is one thread on LED’s: http://www.chiefdelphi.com/forums/showthread.php?t=26878
and there are a couple others about them as well!

True. When watching machtes you couldn’t really tell which bot was on what alliance which made scoring difficult. What we did is we CNC’d a light mount. It workes pretty good. I’ll try and upload a pic.

In all honesty if you really were superbright leds then no one would have any problems seeing them.

I thought the lights were pretty stupid. As much as I hated mounting the dome light, it was still much easier to see and it actually served a purpose. I think I could send our robot out with no lights on it and few would probably notice. It is a step in the right direction because they’re smaller and lighter, but functionality was compromised with this change to the kit. I would like to see something brighter that blinked longer in shorter intervals for next year.

I would agree that they are a step in the right direction. They had their pros and cons, but like with the light I’m sure FIRST will strive to find better ones.

LED Advantages:
Smaller, don’t have to find placement in robot
No changing of the cover or teams with the wrong cover. (Not that it ever happened :ahh: )

Light Advantages:
More robust (If the LEDs are not shielded they pretty much explode on any sort of impact)
Brighter

Even as is, I like them better. (As a Mech E, the wieght and size sold me

Even as is, I like them better. (As a Mech E, the wieght and size sold me

Eric’s direct quote was:
“Who cares if you can see them or not! It’s lighter! More MechE weight!”

There are many resons why i like these so much. One ius the changing of technology, isnt that what FIRST is all about? Also its alot less field lint i had to worry about as Field Reset Manager in NYC. Plus No more worying about finding a blue or red cover that isnt broken for our next match. Also they were ** DESIGNED BY IFI **. I had a loing talk with one of the designers over this past weekend and i learned alot more about these and my mind was pushed into liking them even more. Also they are lighter and easier to mount, no more wiring to a spike, now directly pinned to the RC. Also they are easier to obtain and take up less space in the spare parts bins at events so theres more available. But like many other have said they seem to need to be brighter and blink a few more times/sec during manual control, kinda like they do in auton mode.

I liked them more than the spinning lights. They’re just a little bit closer to Death Lasers.

Seriously though, I was in the second level of seating at the competition and I could see the lights fine, even on some of the bots with…interestingly placed lights. I guess it’s different when you’re on the ground.

Personally, I sometimes had a bit of trouble discerning the LEDs. I wound up using context clues (team number, where the drivers were looking, etc.) to figure out alliances.

Perhaps either a tweaking of the LED flashing is in order, or maybe (and I know this sounds low-tech) a flag that teams have to mount on their robot once it hits the field? Just pop it on the top when you set up, take it off when you get off, no weighing or measuring or any of that. If nothing else, it’ll make things that much easier to see for the spectators (which FIRST is trying to aim for–to a point). I pity the poor folks who were sitting way up at the top of the stands at Palmetto. I shudder to think what would happen had they opened the upper deck up!!

I picked up too many of the flasher covers off of the playing field carpet. Most were pulverized into something just short of dust. I’ll bring a dustbuster to Atlanta.

I heard something about this. Other than the nice changing blink-rates for different periods, I think they also mentioned that certain error states can be discerned from afar by the blink rate/styles.

I found the LEDs worked best at extreme distances. For instance, when I was wathcing a match from about 150ft away I could easilly tell which color a robot was.

Of course, it was much easier to distinguis during autonomous mode. With a brighter LED, and a quicker flash, I think the new LEDs would be perfect.

… the computer randomly reassigns all robot alliances 1 minute into match

… the computer randomly assigns each robot a different color… which matches a different IR beacon frequency.

I could see the potential for disaster…but if you applied the idea to FIRST Frenzy, it’d be kinda interesting to see the strategies. Maybe next year.

Actually, the lights do double duty as diagnostic indicators for the IFI field manager. He showed me the sheet at West MI that showed about 10 different problems that are reported be the LED’s during setup that you simply could not do with the rotating light. Maybe someone will come up with a nice little light stack design on a post or something.

Light Advantages:
More robust (If the LEDs are not shielded they pretty much explode on any sort of impact)
Brighter

I’ll agree with the robustness but not with the brightness. LED’s are slowly replacing the light bulb because of their brightness. I have noticed that a lot of stop lights on Long Island use LED’s. I can actually see the individual LED’s when I drive by. Also, there has to be a compromise. You don’t want to blind the people working the robot. I wonder if there is a differnce in the power consumption between the LED’s and the revolving light.

I can actually see the individual LED’s when I drive by.

They’ve got those here too and I too can make out the individual LEDs. But I bet you if it was only 1 individual LED up there you wouldn’t see a thing. Plus, each individual one in those is larger and brighter than in ours and they have a better lense.

I like the LEDS they gave us this year. They could made much better though. I thought I read somewhere that they made these last minute but they now have plenty of time for improvement!

We came up with a LED tower at the last minute. all 4 LEDS are mounted on a 1 by 1 piece of aluminum tubing. We also took a whole lot of weight off by cutting nearly 75% off those 4 foot long wires :eek: 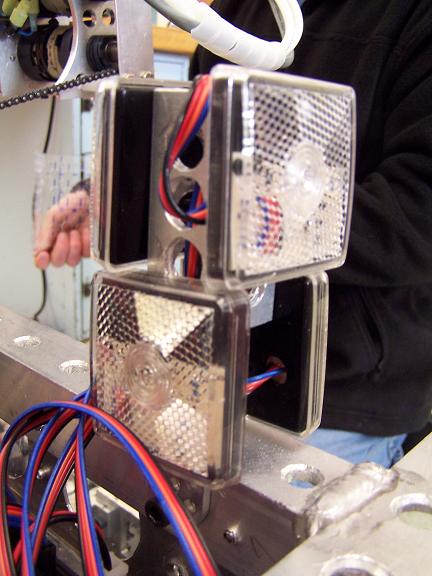 I could see the potential for disaster…but if you applied the idea to FIRST Frenzy, it’d be kinda interesting to see the strategies. Maybe next year.

Ehh, I don’t know how interesting it would be. Stationary goals would become useless. Your human player can’t hit the opposite side of the field’s stationary goal. You couldn’t use the mobile goal because your color might change. Your only options would be to sit for a minute or hang.