My team and I are looking to power four CANCoders, and would not like to use four individual PDP ports. Is it legal to tie the four together to one PDP slot?

Or, if you have a better way to power four of them, could you please expand upon it?

“I would power all the CANcoders off of a single 12v 500ma port on the VRM. With them plugged into the 12V 500mA vrm port, it qualifies as both a custom circuit and a signal level circuit, which gives you a bunch of freedom in the rules. I would still recommend splicing all four of them together and having a single wire going in the VRM port. They each draw 60mA maximum, so power draw is not a concern with 4 of them on a single 500mA port.”

That is the answer that was given when it came up on a different platform.

Thank you very much!

Powering them off the VRM is a better solution, but all together they make up part of one custom circuit so they can be powered of one PDB slot.

I have been told you may splice a connection from the PDP slot to 4 wires. You aren’t allowed to put all 4 wires in the PDP but you are allowed to have a splice joint from 1 wire to 4. I could be wrong. Please correct me if I am.

You can have a splice, but you have to maintain wire size if the wire isn’t integral to the COTS device you are powering. The breaker size populated in the PDP determines the minimum wire size for all branches that don’t have subfusing. So you can’t e.g. use a 20 A breaker, put 18 AWG into the PDP (legal), and then splice 22 AWG directly onto it (illegal unless that 22 AWG wire is part of the COTS component you are powering). One advantage of using the VRM is that it’s subfused/current limited, so you can use smaller wire sizes.

That is true. But for the VRM, wouldn’t you need 2 VRMs, take 1 PDP slot, to power 4 CANcoders, right?

I’ve not looked up the current requirements of the CANCoder, but I would think it’s pretty low current, in which case you can splice multiple of them off of a single VRM 12V 500mA output.

We powered all of our sensors from a single PDB slot (as a single “custom circuit”) using the din-rail mounted terminal blocks shown below. 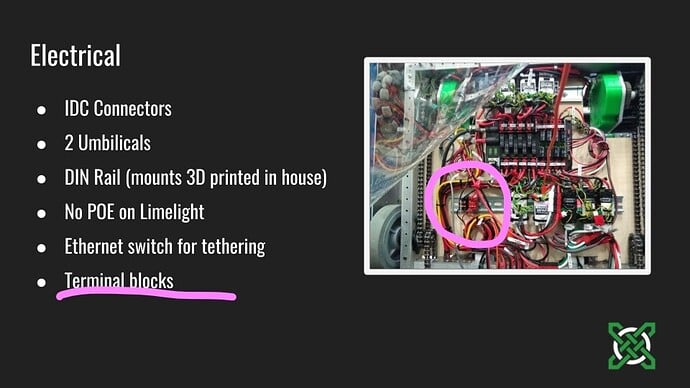 According to the CTRE website, the CANcoder can draw max 60 mA