I think this is spot on. I think before the mesh, the deflector looked kind of like a traintrack switcher, and you could see which way the flap was pointing.

While we’re on the topic of 469, I just realized it would’ve been cool if there was a sort of covering put over their railings so that defenders would have no idea of which way the balls were rolling until they actually left the track.

They couldn’t do much more than the mesh as the rules that year only permitted the soccer balls being 3" inside your robot. It would’ve been illegal to have something blocking the balls from view (as they would be “in” the robot), so they settled for the next best thing – obscuring the deflector’s direction.

Unfortunately for 469, their robot was notorious and basically the only thing anyone talked about for weeks leading into Atlanta was how to beat them. So they were extremely scrutinized, leading to teams figuring out the “shake”.

I’d say that while their fuel game was indeed virtually unparalleled, they also had a good balance (decent gear game and climber). Also likely the most effective mecanum implementation that I know of.

I’ll toss in a vote for 1986’s 2013 bot… had it not been for some bad luck (or different 2nd pick strategy), they would have been on Einstein, and likely taken the win (and given 1538 a sweep). They had the best auto of anybody that year, and were a very effective cycler with an incredibly fast climb. They also had notably good bots in 2010 and 2012, but 2013 put them on the map.

1114 was also very dominant in 2013; had they not broken their climber they (with 118 and 4038) would have likely defeated the eventual world champions in and made it to Einstein. 2013 had a lot of dominant robots (and a variety of diverse yet successful strategies) and a lot of teams gained new recognition.

Don’t think it’s really fitting for OP’s description of a legendary robot, but 1690’s 2016 robot has got quite a legendary reputation here in Israel…

Dave’s Other Car is legendary. It stretched a 90 day mission to more than six years. 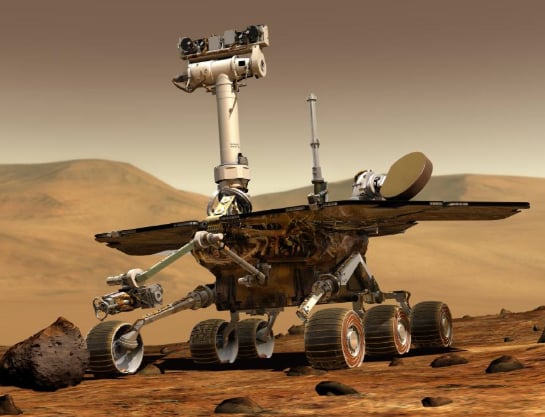 As one of the four teams to come as close to a championship win as possible without winning (unless you count the aftermath of the 2012 Einstein debacle- all 4 alliances got auto-invites for 2013), they do stand out. I’d argue they were the most dominant Israeli robot up to that point, and possibly of all time. If nothing else, it was the year that put Orbit on the map in the rest of the FIRST world.

For my money, this is the most legendary robot ever posted on Chief Delphi.

A little biased, but 857’s 2002 robot. It was the first Kiwi drive in FRC and the controls were interesting. Instead of programming the vectors and math stuff for kiwi, we put 3 joysticks together and joined the handles together.

Edit: my profile pic is our joystick combo

For my money, this is the most legendary robot ever posted on Chief Delphi.

I knew before I clicked.
Still clicked.
Worth it.

Instead of programming the vectors and math stuff for kiwi, we put 3 joysticks together and joined the handles together.

How had I never heard of this before.

Now I want to see someone drive a swerve with 8 joysticks all joined together.

I remember being at IRI that year - someone on the balcony was pointing which way the switcher was set to, apparently. Paul Copioli stopped between matches to publicly scold/shame the person!

How had I never heard of this before.

It wasn’t the best robot ever, but Kiwi during your “rookie” year definitely brings attention. The only other 857 claim to fame is the second longest blue banner drought at 21 years.

We came out of the gate with the same concept as 148. We thought we were so cool, then their reveal came out… Their robot might’ve been better, but ours was more colorful and that’s what really matters. Neither of us were able to use our autonomous can wrangler attachments in competition. Like 148’s, ours was also ruled illegal at our first event, which we think is just as much, if not more, of an injustice as Alfred being illegal. You can see ours at the end of our reveal video.

The rules had no max size or frame perimeter that year, so some teams figured out that as long as you were “connected” you could have as many separate parts as you wanted. For most teams, this was a string connecting a robot to a ramp or two, which would allow totes to fall nicely on the field. A few teams figured this out for week 1, and it was immediately copied by almost everyone else, and increasingly cheesecaked onto third robots.

A few teams, such as 148/4039 took this a step further, and had their tethered portion powered. I don’t know much about how 148 did it, but I can give some details on ours.

ROY was the primary robot, and hosted all the controls (roborio, pdp, motor controllers). One of the outputs of a motor controller was a tether made of overly large gauge wire, wrapped in expandable spiral wrap for durability. We wanted it to be a high enough gauge to not loose too much voltage over the ~30’, large enough diameter that it wouldn’t get sucked up into robots or damaged, but not so large that it would become an obstacle. I think the tether itself weighed 2-3lbs.

The tethered portion of the robot, BIV, had one CIM to drive an elevator, and no sensors. It had hardstops on the top and bottom, and the normal range of motion was well within these. The operator controlled the carriage position manually. There was a third part, G, which was a fancy ramp to catch the totes nicely for BIV to pick them up.

One of the hardest parts of the design was packaging it all into the “transport configuration”. The carriages had to be at a specific height to let the two parts mate together, then the whole assembly had to sit on a robot cart at an angle of around ~15 degrees. Somehow FIRST considered this safer/easier/faster than keeping them seperate.

Taking #teamtether one step further was 1285’s double bot, but for various reasons, they weren’t able to execute the idea very effectively.

The OP asked for legendary robots, robots that changed FRC forever. I completely agree with you that the 900 2015 2nd attempt robot may have been overhyped, but there is no question it greatly impacted FRC because it was a direct cause for (EDIT: cause for the clarification of) some of the withholding allowance rules and “only 1 robot at an event” rules.

it was a direct cause for… “only 1 robot at an event” rules.

900 bringing a full practice bot to use on a practice field in 2016 did, though.

My personal FRC Mount Rushmore would be:

At BEST it highlighted cheese caking as a practice but that was hardly new and had been discussed multiple times leading up to that event.

So… the tether is a piece of the robot. To make 2 robots 1. I thought they were driving on the ethernet cable…

Come to think of it, i think team 20 also had the same setup. I couldn’t find really good videos of it because, you know, technology, 2015.

bringing a full practice bot to use on a practice field

That had occurred previously. I recall one such incident in 2004. The team had brought their practice robot, and were noticed driving it in practice matches while they worked on the competition robot in their pit. The RD, who at the time was also a FIRST Board member, saw that as a grossly unfair advantage and was ready to disqualify the team. Someone at HQ stepped in to cool the situation down, and the practice robot was stashed in the team’s trailer.

To put it in perspective, teams often played very few qualifying matches per event in those days, and playing at multiple events was not nearly as common as it is today. A team’s whole season could be as few as six matches if they were not selected. Time on a playing field was thus even more precious, and bringing an extra robot was seen by some as a way to steal that time from other teams.

ours was more colorful

Yesssssss that song is