Hey guys,
For the past few weeks I have been trying to use a lens effect on an omni light in one of my scenes for a nice sun look. I have done this numerous times before with no problem at all, but this year it is not seeming to work. I add the effect to the omni and put the parameters of the effects that I would like and press render, but an error message shows up saying:

Unsupported Render Effect
The following render elements are not compatible with the bitmap format selected for rendering. The selected Bitmap format is:

Now i know i must be doing something wrong, but i just can’t figure out what.

Any help would be amazing!

Hi. Next time it would be helpful if you specified the renderer and any other relevant information. I assume you are using the mental ray renderer, which gives you the option of 16-bit integer output or 32-bit floating-point output. In Render Dialog -> Renderer -> Sampling Quality, change Frame Buffer Type to Integer (16 bits per channel).

sometimes mental ray does not support some effects. I now that it doesn’t support volume light. In that case you can always Layer Render!!

Im sorry. I am rendering with mental ray, and i tried the 16 bit channel. It still did not work. I used lens effect with mental ray before but not on MAX 09. just 08. It worked once on 09 but I have no clue what I did to make it do that.

The upper left box in the attached screenshot should specify the type (r-click on the render buffer window). Shouldn’t changing the bitmap type in the render dialog change that? I’m still on Max 9. Works great lol 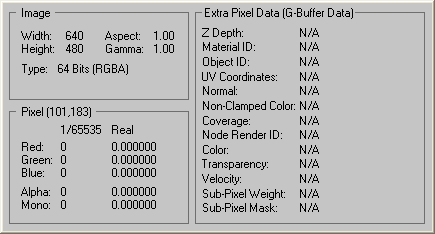 No, you can not use lens effects with MR. I would suggest making a sunburst in photoshop or the GIMP and making a partical system with a single static “facing” particle. Or… you could use layered rendering or switch to scanline.

I have, and I will repeat, I have used lens effect with mental ray before. Actually, our animation last year had a lens effect on it. We used mental ray, and that was done in MAX, not Photoshop, or Gimp. And thanks for the thumbnail. I never knew right clicking the tabs brought up stuff like that.

The upper left box in the attached screenshot should specify the type (r-click on the render buffer window). Shouldn’t changing the bitmap type in the render dialog change that? I’m still on Max 9. Works great lol

MAX 9 ALL THE WAY

sometimes mental ray does not support some effects. I now that it doesn’t support volume light. In that case you can always Layer Render!!

Wait, I know for a fact that mental ray does support volume light. I use it every now and then for fog effects.

Forgot what I was going to originally post. You could try using video post to do a glow effect that you want, but other than that you are going to want to use particle effects. I tend to stay away from video post because it is a little bit tricky.

The problem with a glow effect in 3ds max is that it recalculates the glow every single time. So you end up with a flicker.

I did mention that I don’t use video post that much right? Anyways, when I come across flickering lights in videos, it is usually because of final gather or global illumination. What happens with those is they calculate how all the lights are going to act in the scene for that frame, finish, dump everything from the last frame, calculate how all the lights in the next scene will act, finish, and have slight variations from the next one. I could go into some more depth on why that happens, but I don’t think it is necessary. What I do know is there are quick fixes, and back door methods for thing like that.

I’m not talking about lights. I’m talking about glow. The lense effect, it recalculates every frame. Ending up in a flicker. Its better to say glows for layer rendering.

Particle effects take to long to render out. With layer rendering you can get glowing highlights on your characters, glowing neon tubs, glowing lights, glowing anything. anything its a lot faster than particles cause all your rendering out is matte passes. Then you tweak it in a third party program such as Combustion or Adobe After effects. You have the most finite control of the finial outcome of your animation. Because you can set the color and how much glow there is of one specific object. Decide you don’t like the color? No problem, all you have to do is change the layer color and BAM! The glow color is changed. You don’t have to wait for max to spit out another layer again. And who know how long that will be with countless of particles.