I’d like to note up front that I work hands-on with Li-ion batteries daily as a Li-ion battery engineer. I’ve had to go through trainings on how to handle them when things go wrong, and let’s just say it’s been put to use. I hope that offers up more credentials than your typical random CD poster who can use google search.

So Li-ion is awesome as an energy source, it has pretty much the best energy/weight ratio of any battery, and is therefore also one of the most catastrophic when all that energy goes where it shouldn’t. Li-ion is used in TONS of consumer electronics and power tools, and thanks to a lot of engineering and a bunch of safety features implemented, it’s rare that these devices see catastrophic failure.

As far as applying this technology as a power source for FIRST, there are a couple of fatal issues, not all of which I’ve seen discussed and I’d like to bring attention to:

I’m not even going to go into detail about how everyone would need the funding for new batteries/chargers, we all know this would be disastrous for low/mid resource teams.

I say these things because I’ve put a lot of thought into how FIRST could implement a better battery, I would absolutely love to not have to deal with SLA anymore, genuinely. But given the context of the users and the use case in this situation, I don’t really think it’s feasible for Li-ion to be used in FRC as the robot battery. I would love to hear from others on the subject matter, but at least I hope I summarized the key points of this for those new to the topic

As an addendum to point 2, lead-acid is so docile that you can charge them up just by connecting a 12V power supply to the terminals and walking away. That’s exactly why they’re used in cars. You definitely should not do that with lithium batteries.

I am extremely interested to learn more, especially if said learning increases the current I can pull from said battery.

From an end user requirement, I would absolutely want:

I wish I could contribute more, and will seek to learn here.

This is a tad misleading for comparing the “true” cost of different battery types, but an FRC-specific battery with protection circuitry and etc would have a similarly inflated price.

Yeah that’s what I was trying to get at, tool batteries are priced way above raw cost, part of that can be attributed to how expensive testing and designing safety features into them can be. I would expect that similar cost inflation would be seen in FRC because of how many user safety features would need to be implemented. Not a 1:1 comparison by any means, but it was an easier comparison to make than looking at the raw cell costs without factoring in the electronics

Also, cordless tool batteries have a way larger market size than FRC, so this actually helps them need lower margins to recoup development costs. In general, the larger the market, the lower the markup you need to cover your overhead, as you can amortize your one-time engineering development costs over a significantly larger volume of units sold.

This post from another thread links to a battery that is probably pretty close to what a FRC battery would look like, including the (expensive!) price point ($379). Spec sheet states 2000 cycles for 80% depth of discharge at 10C (~120A), which is fairly impressive, but yeah, FRC discharge rates can go above 40C in surges, which is going to be really hard on cycle count.

EDIT: They also have their manual posted for the ETX series, which is really informative: https://earthxbatteries.com/wp-content/uploads/2020/11/ETX_Manual_111017_Y-1.pdf

Fun fact: it can be charged with a standard lead-acid battery charger. What really needs to happen is someone with some money to burn to buy one and put a FRC robot through its paces with it (if it works well, it might be an amazing practice battery!).

Also, if cost or size were no burden, a 4S1P arrangement of these 3.2V 280 Ah LiFePO4 cells would make an amazing “all afternoon” practice battery.

While I haven’t used these specific cells, they seem to be getting good reviews from folks who build their own homebrew Powerwalls.

I for one have the knee jerk reaction of “LiPOs, Yeah buddy! bring it on!” Then I settle down and ask myself “Self, do we really need more battery?” Especially since everyone else has to use the same battery. We are already pushing the limits of practical currents and wire sizes on the current topology. I want a “stiffer” battery (lower impedance). My second knee jerk reaction is, what others have said, lead acid is very forgiving. But then I look at the RC industry and at my RC boat and see a 3200mAh battery pack getting hammered with 90A+ hole shots!

Question: What does an 18Ah lithium pack look like? How big is it? Does it need to be 18Ah? I think the above links are batteries of the same physical size which means they are way more power than we need.

I bet we could get through a match with something like this: 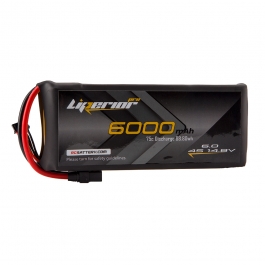 Whether you're an RC enthusiast who loves to take their models out for a fly at the local club or a professional drone/ FPV racer, this Lipo battery is for the masses. Delivering on power, durability, performance, and affordability. Liperior Pro...

It’s about the peak currents, The wire is a bottleneck, especially in this one.

These are just thoughts flowing out my brain. Please feel free to critique me. Fun stuff to talk about.

We had a steel chassis robot fall over, even with the SLA battery. It’s trickier than you think!

Question: What does an 18Ah lithium pack look like? How big is it? Does it need to be 18Ah? I think the above links are batteries of the same physical size which means they are way more power than we need.

Size/weight wise the Li battery is about 90% of the size and about 30% of the weight of SLA.

One thing this discussion is showing to me is that if FIRST did go down the Li path it would be “use this exact battery”, not the current wide-open “use any 12V SLA <18Ah”.

Honestly, I’ve seen teams do some beastly things with currently legal batteries*, and even when we got a faulty charger, we just needed a box or two of baking soda, a bucket, and some gloves to deal with it - and the soda was precautionary. When we get COTS battery/charger/tool solutions that can match/exceed high end FRC SLA batteries at a not-too-much-higher price but much lighter weight, I’ll be ready to switch.

Out of curiosity, what’s your threshold for this? For me, 10x (which appears to be pretty much where things are at today) is clearly “too much higher”, 5x would be “this is a hard decision”, and 3x or lower would be “shut up and take my money”.

One can also look at the choice of battery as a design constraint imposed by the GDC just like the dimensional constraints that appear in the Game Manual every year. The choice should be fair and applies to all teams. These constraints make it necessary to exercise greater ingenuity and thought to do more/better than your competitors. It is quite likely that this is one of the objectives the founders of this program had in mind.

There are many other competitions where the power source is limited. In some car race series, the engines have to all come from the same builder and are sealed so modifications can be detected.

Edited to add:
Please note that the rechargeable batteries for the last three generations of Lego Mindstorms controller bricks used in FLL all use Lion batteries. The power is limited by the type and number of motors allowed. That has not stopped some teams from building some quite powerful mechanisms.

Nukes the motor ecosystem aside from NEOs, but will increase power and efficiency across the board.

We’re not too concerned about battery size or weight in FRC so we don’t need to go to other chemistries to get more power.

EDIT: 12V motors would still work as long as the controller can handle 24V, and then either limits duty cycle and/or current limits to keep things surviving.

I think we’ve got a few more “halvings” to go before lithium batteries are powerful and cheap enough to use in FRC.

We use four 12v SLA batteries in series to power our underwater robots…having a nominal 48v available lets you do ok with significant voltage drop on a relatively skinny tether.

I like the idea of 24 volt SLA batteries, except that they are not easy to find…are they?

Do a quick google search, particularly aimed at Amazon. You should be able to find a few.

Source: I was doing a similar search the last week or so. Just make sure to specify SLA and the capacity you want. (Though I should note that the 24V SLA batteries I found were something like $500 each–but would last a lot longer than 2 minutes.)