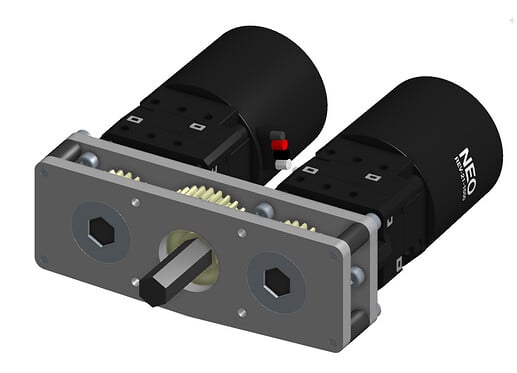 Here’s what I think a low-profile drive gearbox could look like using the new MAX Planetary Gearbox from REV. This model is designed for 4" wheels at 14.6ft/s and weighs approximately 4.6 pounds with everything pictured. It runs with two 5:1 planetaries with a 38:28 reduction at the end for an overall 6.79:1 ratio.

A key advantage to this form factor is that, besides the very edges of the motors, the gearbox stays completely flush below a 2x1 drive rail, as pictured.

That’s the same design the FTC teams I used to coach always used, before nearly everyone in FTC decided that mecanum drive was the solution to every game.

If you’re going to go this route, why not put the MAXPs on separate wheels, then link them together with chain/belt? Then you’d have four wheels with direct drive.

Would be more weight, 2 sets of spur gears per drive side instead of 1.

That said if I was going to do this I would probably mount the MAX Planetary directly to the drive tube, and I would do the spur gear stage to the wheel outside the tube on the wheel side. Chain-in-tube to power the other wheels. That is probably the simplest and most weight-efficient way to use the MP on the DT outside of accepting an MP ratio to direct drive the wheel shaft.

Understood, and a bit more cost, but offset in my book by more reliability and less machining.

I would probably mount the MAX Planetary directly to the drive tube, and I would do the spur gear stage to the wheel outside the tube on the wheel side. Chain-in-tube to power the other wheels.

I’m trying to imagine assembly and repair. You’d have to drop the sprocketed chain down the tube first, catch the sprockets with the axles, then add the MAXPs inboard* mounting through pass-through holes outboard, and finally secure the spur gears on the MAXP outboard. That appears to be doubling down on the confidence that the chain won’t break, as replacing a chain would require reversing and repeating that assembly.
I’m not saying you and your team can’t do this, but I wouldn’t touch it.

* I’m assuming the motors go inboard and the wheels outboard, of course!

Generally chain-in-tube removal or assembly generally means mounting the gearbox after dropping the chains, so really not much different. I have a mockup of this setup somewhere.

Personally while it is really cool and an easy way to get a low profile DT setup (I’m a bit biased as well), I still don’t think the efficiency loses using a planetary gearbox has is worth it.

I still don’t think the efficiency loses using a planetary gearbox has is worth it.

Totally agreed. Planetaries are great for relatively small form factor and can be engineered to be quiet (that’s why so many submarines use them), but a 3 stage spur gearbox is likely less loss than a planetary + spur, much less dual stage planetary.

I look at who is posting this, your age, and I say Rock On and Bravo. You are exploring and thinking and building and I want you to keep doing it!

But yeah, what Nick said. Planetary transmissions are a no go for me too on the drivetrain.

I don’t think the efficiency or strength is the real problem. The MAX is advertised to be far stronger than a VP (which is what I think some of the posters are imagining). Efficiency is especially nebulous given that nobody actually bothers to measure it on any FRC drive. At most I could see maybe a 5-6% hit over normal 2-stage gearboxes? But like I said, nobody will really know for sure or bother to measure it.

The comments about ease of assembly I do resonate with, however. I think making this design assemble from the motor side makes this somewhat easier, but it will be hard to assemble no matter which way you go about it. I would probably try and put the sprockets in the gearbox like a traditional WCD and use 2 large tube spacers instead of 4 smaller ones, so that the chain can go around them. Or remove the front plate entirely - the outboard bearings on the MP shafts don’t seem particularly useful anyway. As long as you can get a hex key through the 2x1 and into the MP mounting holes, it should be much easier to remove/replace the gearboxes during assembly.

I know this is probably apples and oranges here but if my memory serves me correctly, the 2007 KOP drivetrain was a planetary gearbox. It didn’t end well. The frequent high-load reversals just fatigued them out.

What kind of planetary did they use in 2007? Weren’t planetary drill gearboxes fairly standard before CIMs were introduced?

Don’t need a spur gear stage. 9:1 is about perfect for 5" Colson wheels!

14.25fps free speed, so if that is a good speed for the game. Also currently locks you into colsons with no omnis, something I would not be willing to do.

It was a Banebots P80, back when they first started making them, if memory serves (and yes, 2007). Even their (stronger) replacement (Gearboxes - P80L (Replacement for P80) - BaneBots) has been phased out for newer and better(?*) options.

For those that weren’t around then, here’s a synopsis.
The FRC community (specifically @Joe_Johnson among others) was directly involved with identifying and fixing the problem. They found that the final stage carrier plate was not strong enough to not deform under repeated back-and-forth motion of a double-D shaft. Carrier plates deformed, causing backlash. After some testing, it was found that hardening the carrier plates allowed them to be more useful than not-at-all, and hardened plates were drop-shipped to regionals for teams that needed them, by Banebots.

That said, I would note that there are two significant differences here. The first: Greg and at least some of his crew were around in 2007, and know to avoid that along with a few other pitfalls. The second: the intermediate reduction. Only the final stage of the 2007 gearbox had that issue, while the earlier stages didn’t really show it.

@asid61 You just woke up an FRC history monster…

CIMs were introduced long before the 2007 drivetrain. I know I’ve seen 'em on at least one 2002 robot in the drive. Drill gearboxes were the KOP drivetrain through 2004 (Bosch drill transmissions, 2-speed–though several teams also used modified Dewalt XRP 3-speed transmissions). In 2005 and 2006, IFI produced the kitbot and included a single-speed spur gearbox that could handle 2 CIMs (2005 was the first year 4 CIMs and 0 drill motors were in the KOP/allowed). For 2007, Banebots supplied their ill-fated unit… Not sure what the 2008 box was offhand, but I think it was an AM box. By 2009, AM was doing the entire KOP drivebase.

*It’s Banebots. They have their good points (like cost), and they have their bad points (you get what you pay for). This episode was the first of two that kind of drove FRC away from them in general; the other is a story for another day as I don’t want to trigger any more flashbacks.

But like I said, nobody will really know for sure or bother to measure it.

Any difference will show up in SysId pretty clearly.

What’s the efficiency of the gearbox on your last year’s robot? Unless someone goes through the trouble of trying different drive gearboxes, they won’t see it.
Good to know that we’ll at least be able to identify a difference though.

That makes me think: six NEOs, six MAX planetaries, six wheels, direct drive… No chains at all! On the bad side, you’d only get four NEOs driving at a time with a drop center, but you’d get the ability to see slipping on the wheels. The two wheels that weren’t touching would have low current draw. You could even use that to detect if your bot was leaning forward or backward

Or, riffing on this one, use two chains or belts on the two planetary outputs to reach the other two wheels. After going to 1:1 on the spur gears, of course.

Efficiency wise, this rig has 5 gear meshes vs a more common two mesh spur box. So, about 2.5x more loss, though the planetary meshes are more lightly loaded than the spurs, so it might not be quite that bad. I would want to monitor the gearbox temperatures for a while!

I’ll throw in that on a typical 6 wheel drive with drop center, you’d also be running the risk of only 1 or two wheels touching the ground when in a pushing match. If your opponents bumpers get under you ,so to speak, and lift one end up a little, your middle wheels may no longer be in contact with the ground. If none of your 6 motors are linked together (ie, chain or belts), now you’ve significantly reduced the total amount of motors/power being put to the floor.