I’m currently trying to machine a piece out of 1 inch Plexiglas on a Haas VF-2 with a spindle speed of 10,000. However, I can’t find any information on speeds and feeds for facing operations. Any suggestions or advice???

I would recommend 55 inches a minute 10000 for all types of cuts, except for drilling, with an upcut bit, 1 or 2 flute with .25 inch stepdown

Plexiglass/ Acrylic usually isn’t a good choice for FRC as it’ll shatter on impact. Polycarbonate/ Lexan is much better as it’ll handle hits and then spring back into shape.

I agree. I’ve yet to see a situation where acrylic was better than polycarb, and don’t even like keeping acrylic around anymore because inevitably someone will mistake it for polycarb and spend way too much time trying to figure out why it keeps cracking every time they try to drill a hole in it.

I’ve yet to see a situation where acrylic was better than polycarb,

In FRC there probably isn’t one. Polycarb is a no brainer substitution.

Outside of FRC, acrylic is more optically clear, more scratch resistant, easier to glue together and easier to cast. Most critically, it’s cheap.

It’s used a lot in science. I’ve assembled a lot of acrylic boxes, splash guards and other assorted acrylic odds and ends for wet labs. Machining it is tricky, but it’s super easy to chemically weld it together, which sort of makes up for all the pain and suffering.

It’s really better in one area - price. I’ve used it in certain situations before (The best was as a scratch-guard on a door to keep my mom’s dogs from ruining the finish!), even the thin stuff, but never on a robot. It’s just not worth the risk of failure on the field.

Depending on the application, there could be other reasons to choose acrylic… but I wouldn’t for an FRC robot. Any clear (or smoked

) plastic you see on my team’s robot is going to be polycarb.

You can make some really neat things with acrylic. 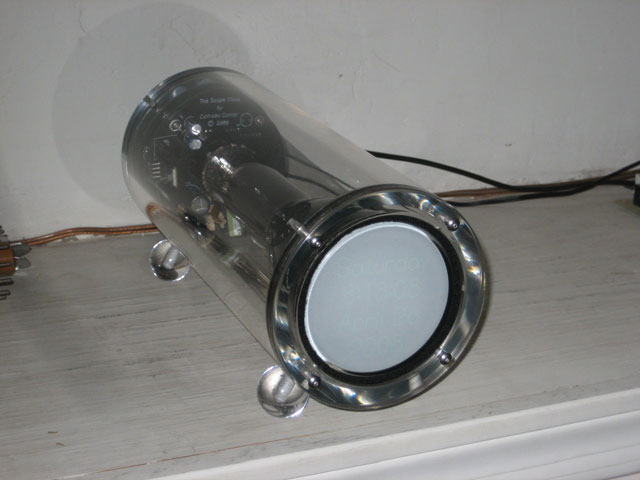 Of course these are things you want to leave sitting on a shelf, not driving around being bashed into by 150 lbs of robot!

I agree that poly carb wasn’t the best choice of clear plastic, but since I had some, one year, I machined the FIRST logo (triangle, circle, diamond) onto the ends of 1/2" dia polycarb rods. Each was about 2" long and polished. The other end was tapped and they screwed onto the master power switch mounting bolts. The purpose was to prevent the game element (ball) from accidentally hitting the kill button.
It did the job and was pretty!

I agree that poly carb wasn’t the best choice of clear plastic,

A little anecdote from our robotics meeting today about why not to use acrylic on your robot:

For prototyping, we used acrylic on our spindexer as the curved outer wall, mainly for the reason that Jon mentioned: it’s cheap, and we didn’t want to waste polycarb on it. We were never intending to use acrylic on the actual robot, but wanted to use something cheap until we knew the exact dimensions we wanted. As we were doing some testing today, one of our team members accidentally kicked/bumped into/stepped on (I didn’t see it happen, so I’m not totally sure what went down), and the acrylic broke. Something similar happened AGAIN a bit later, so by the end of the meeting, both the pieces of acrylic used for the wall were being held together with duct tape.

So, the moral of the story is: acrylic sucks for FRC applications, and as others have already said, I would highly advise against using it on your robot.

The one exception to this is for a sponsor board that is out of harm’s way and doesn’t serve any mechanical purpose. We have used acrylic for this the past few years and it has worked very well for us.

When I see acrylic, galvanized steel, or open containers of drinks they go straight into the dumpster outside. Not sure how or why the may have come into the shop - but none are allowed.

Out of curiosity, what’s the issue with galvanized steel? Is it problematic to machine?

Compared to aluminum, steel is tougher to machine in general. Galvanization adds corrosion resistance but not much else IIRC. Maybe some gummy cutters. Stainless steel is notorious for gumming cutters if you push too hard, but galvanized isn’t stainless.

The big issue is if somebody thinks they can WELD it. That’s when the hazards begin–and you hope the only hazard is @Chief_Hedgehog’s spikes when he finds out that someone brought some in to weld, rather than the fumes.

Oops. I meant I agree with SNichols that there probably isn’t a situation where acrylic is better than polycarb. Apologies.

…And I made the kill switch protector out of acrylic, not polycarb.

I agree. I’ve yet to see a situation where acrylic was better than polycarb,

I agree that little use for acrylic in FRC applications… But It does have better optical properties. Scratches polish out better. The barriers in hockey are made out of acrylic.

We work out of my welding shop. Galvanized steel is not a metal that I want my students welding due to the zinc oxide in the fumes. See this for more information.

Polycarbonate used in outdoor exposure has to be coated to not haze over time. Usually it’s protected with UV coatings. They’re rated in how many years of effectiveness to expect…example “MR10” for ten years, "MR5 "for five.

Many cars have aerodynamic polycarbonate headlight covers and you’ll have to ‘fix’ them from time to time. Usually the fix is to physically remove the outside layer (sand) and polish it smooth again with a special kit, though there are other ways too. If you’re smart, you then spray it with an acrylic coating.

Acrylic last longer outside. Fighter plane canopies were acrylic since WWII and they were usually thick enough to stop high-power bullets. I don’t know what they are today. They got the strength because they’re really thick. Some banks have acrylic bullet-proof windows. “Perspex” and “Plexiglas” are both trade-names for acrylic products.

So, I agree that there’s no acrylic on our robot, but I won’t say it’s not useful.