Made a Reveal for our 2012 robot: Hortência

Hortência and the 2012 season were really important for the evolution of the design of our future robots.

After 8 years we finally made it: https://youtu.be/NQ2bnSU0nyc

Out of all the things I expected to see today, a new reveal video for a 2012 robot was not one of them, but I gotta say, I love the idea! I think it would be sick to see teams use old footage to create new reveals for older robots (bonus if they use new footage).

There is one thing I don’t like about this video, however. During the last scene when the 1156 bot is coopertition balancing with 971, you see this sham of a robot in the background completely failing at manipulating their alliance bridge with some of the worst driving I’ve seen in my years of FRC. I don’t like this because that was my robot, I was the driver, and I could have gone the rest of my life without being reminded of how bad a driver I was

Seriously though, great idea making a reveal for an 8+ year old robot! I’d love to see this become more of a thing!

But without that robot we would have never gotten this gem.

I really didn’t expected this

I also want to make a video for the 2013 robot, but first I need to find videos of it.

My HS team’s 2012 robot is my go to example for students now in days about how sticking to a bad strategy can ruin a robot. No one needs to put recurve bow limbs on a robot and no one should try to launch a foam basketball 54 ft across a field. 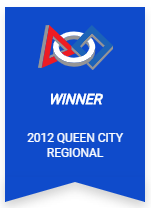 I’d like to think that banner is just a testament to scouting and good drafting because I can count on one hand how many baskets our robot scored in 3 events.

The same as we did in 2013. Probably a shooter would have been better than just trying to climb

Wait, you mean there are games where just trying to climb isn’t a viable strategy? /s

Gotta have Thunderstruck playing. I think that was a Los Angeles regional “event is open” song for many years.

Hey! I resemble that remark!