I know the Falcon 500s have a thermal shutdown at 110C, so is the temperature of the controller what is used for that?

One constraint is where the temperature sensor is located. My guess is that they are exposing readings for all/only temperature sensor. The temperature does not have to be the same but there is likely some degree of correlation. Just as with reporting, the thermal shutdown depends on the sensor/s.

That’s my hope as it would suck if there was no way to directly ask for the temperature of what it uses for thermal shutdown.

You can always open an issue on the CTRE GitHub. They’re pretty responsive.

Here is our (team 2767) thermal testing during beta release.

If the question is “How accurate/real is the measured temperature?” then this may shed some light on it. I believe the sensor’s physical location is in the center of the PCB (the SOT-23 package) so it’s effected mostly by the heat from the FETs however the stator temperature, even though it is higher, tracked the sensor and stayed low enough not to melt down. 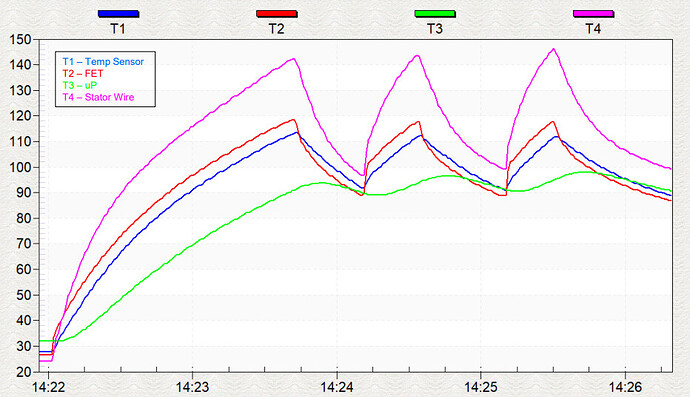