Today was my team’s last meeting for this season and it is to my great satisfaction that we were able to get our pathfinding working today. While it is working, it is far from perfect and still requires a lot of tuning. Unfortunately, I will have to leave that with the rest of my team for next year as this was my senior year of robotics.

The idea of following trajectories with our mecanum bot while utilizing the holonomic drivetrain started off as a small idea midway through last year’s build season and really took shape at the end of last year’s season. Since we didn’t plan on building an entirely new robot this year, we were able to divert more time and resources towards getting it working.

Since WPILib has little documentation on the mecanum trajectory following, this post serves as a place to help other teams who may be looking to do the same as we did.

To start: Instead of using wpilib’s trajectory generator, we opted to use @mjansen4857 path planner which we found on their GitHub. Linked below. I noticed they had added an “experimental” holonomic drivetrain version of their path generator so I gave it a shot and it actually worked very well! So @mjansen4857 if you are still wondering whether your holonomic generator works… it does!

The nicest part about having a visual generator is the ease of use and time it saves from having to map out waypoints. For anyone who doesn’t have a visual generator, I highly recommend giving this one a shot.

Here is an example video of a path being previewed on the path planner and then followed by the robot:
Preview Then Play | Slalom Path (No Markers)

Here is another example of a path being run:
Forward and Spin 360

Here is our GitHub repository for the trajectory following:
https://github.com/Wayzata/FRC-Mecanum-Pathfinder-For-TestyBottyBot

Bugs we fixed:
Since some of these fixes were not merged yet so we pulled the related classes out of wpilib and implemented them ourselves.

If anyone else has any questions about anything here let me know I am more than happy to help! If anyone is having troubles following trajectories with their mecanum drivetrain I am also more than happy to help! I know our code is a little messy and I apologize for that. We were in a rush to get this working before we had to pack our season up so I haven’t had a chance to clean up the code much. I just hope that any teams who have been struggling with mecanum pathfinding can find some helpfulness in our code. We surely had a struggle getting it working but the satisfaction when it finally did was like nothing else. Good luck to all the teams this year and in your future years of FRC. FIRST has impacted me so positively and I am so grateful to have been a part of it for the past three years.

The face of a happy Testy Botty Bot 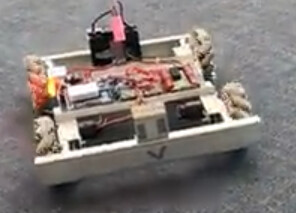 Glad you were able to have some success using this! I mostly labeled the holonomic generation as experimental since it was a pretty quick and dirty addition for 3015’s swerve drive. I definitely need to put some more work into it when I get a chance. It’s good to see it working for someone else though! Hope you guys can see even better results next year.