Similar to many other people, isolation has given me the opportunity to put into CAD some of my ideas, such as this design that merges the versatility of a mecanum drive with the pushing power and traction of a normal tank drive. However, I’m not sure if the additional traction with the traction wheel would be substantial enough to warrant having that whole assembly there versus just using mecanums. Ideally, this design would be good for games like 2019 where precision alignment is important but where defense is a commonly used strategy. A goal for this project was to make it simple and cheap enough to be an alternate to swerve for teams that use the KOP chassis and don’t have the resources or manpower for swerve. 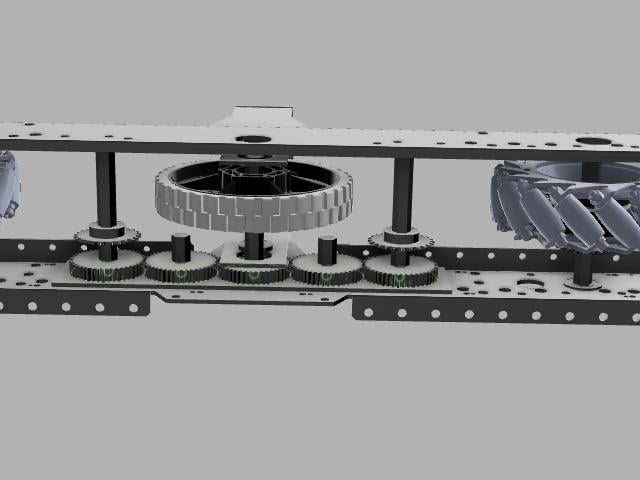 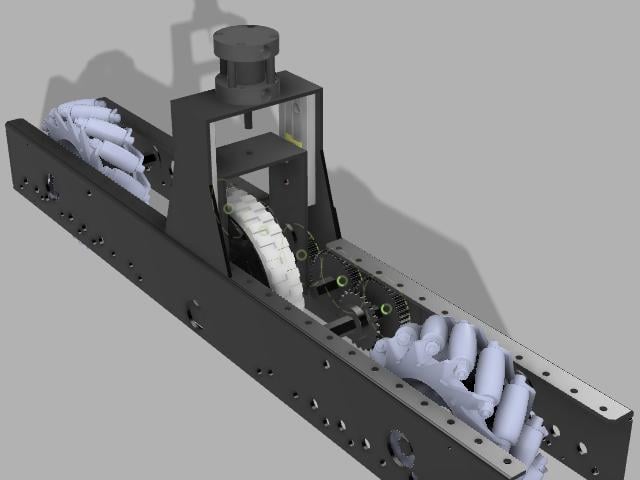 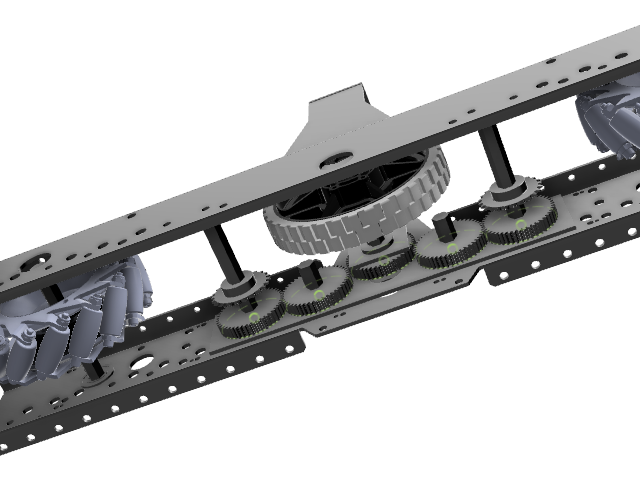 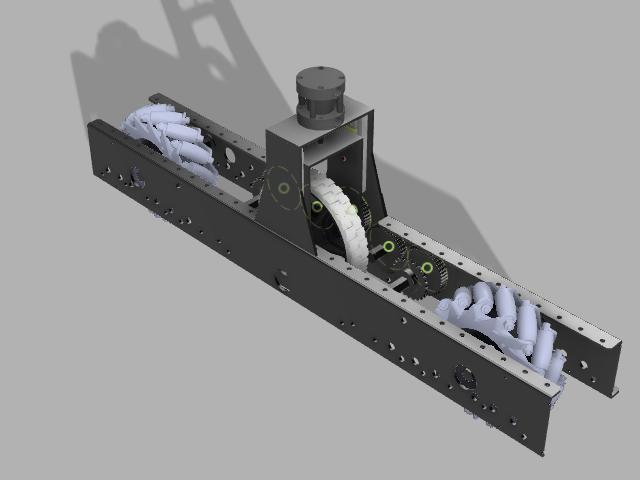 Do you worry about stripping the gears that mesh with the traction wheel when you deploy/undeploy the wheel? It looks like they disengage and if that happened while driving I’d think the drivetrain would throw up gearteeth

This looks kinda like octocanum but with one traction wheel 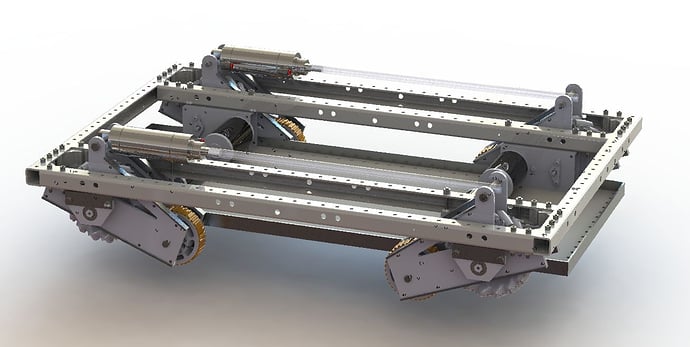 Yeah, I’ve though about that and while it could happen, the gears mesh before the traction wheel hits the ground so there won’t be any rotational load on the wheel when the teeth engage, and if we put flow control valves on the pneumatic cylinder to sort of ease the gear down, it should be able to engage without damage, at least at lower speeds, but I could be wrong.

Neat idea, but I agree that the gear engagement and motion following gear engagement is a problem. Perhaps you could drive a differential from each of the front and rear wheels to drive that center wheel, using a belt or chain with tensioner so it can take the slight change in distance.

If I’m picturing it right, the differential would have bevel gears facing each other, with a planetary arrangement of bevel gears on “spokes” which are free to rotate on their own axes/spokes but which drive their carrier which turns the wheel. The solid wheel would always turn at the average of the two wheels which drive it.

The problem is that the front and back gear sets won’t likely be synchronized when the wheel comes down. One will engage, regardless of the relative position of wheel gear and drive gears, but the other is all too likely to be in the wrong position. Then you have two driven gears that are not in sync. That’s pretty much a recipe for ground gear.

I think it would be easier to have the center wheel drop down using a swing arm like the Octocanum and then you have a constant center to center distance that you can use to keep a belt or chain or gears engaged regardless of whether the wheel is up or down. Yes, the wheel will be spinning when not needed, but if it is not touching the ground, that should not be a huge drag hit.

You only really need to drive the center wheel from one end. You could easily “lock out” strafing in code such that both the motors on one side would be driving in the same direction at the same speed. you won’t get quite as much pushing power if you are motor limited, but if you are traction limited, it won’t matter if the center wheel only gets the power from one motor or both.

You could easily “lock out” strafing in code such that both the motors on one side would be driving in the same direction at the same speed. you won’t get quite as much pushing power if you are motor limited, but if you are traction limited, it won’t matter if the center wheel only gets the power from one motor or both.

If you are going to do this, I suggest just doing a semi-octanum, putting the traction wheel rather closer to one end than the other, and powering from the nearer wheel. This way there will still be some weight on the “solo” mecanum wheels and those motors will be able to help.

You know… there’s a better way to do that… maybe. The first link goes to the current version.

[39d04c5f22dee5c69ec560f6cc4775ad_l.jpg] I thought I would revisit an old drive design. We used chain driven ball differential on Omni wheels between mechanums. This gear differential is a vast improvement. We might install two mini CIM’s and each mechanum.

Here’s the older version–or a few of them:

[9ec7d8b5eb02eba2f0f28917b78b83db_l.jpg] Proto type drive system for 2010 with 10 wheel drive. Weight is the only problem. We have a working 6 wheel proto type that pushed very well but adding the 4 sets of wheels will allow for addtional pushing power. We have allowed for the 6 inch bumper segmantes at each end.

[54869f2b1c7d5ce5e4026db9da9a23d3_l.jpg] One side we used bain bot gear boxes and on this side we used kit gear boxes. This is just a proto type to see how different gear boxes would work. The easy way is direct drive from the gear boxes to the mecanum wheels. The mecanum wheels are home made and we used HDPE, rubber stoppers, brass bearings and 1/4 20 bolts. We lathed the plastic and than used a drill press on a 45 degree angle to make the holes and than a 1 in auger drill bit to counter sink…

[4cfc51536e7b9dfaf0a404d8fc3ac101_l.jpg] This is a crude drawing , we are still working on the cad file. A top view of the idea I posted before. We hope to use steel tubes to suport the drives so they can move up and down with the ramps. The bolt of the bumpers will slide into the tubes and a cotter pin will hold it together. More drawings at http://www.team1322.org/ideas.htm

We were thinking of doing this this year, but ultimately decided that it was nit worhlth the tine or effort. Our design was much like the last one posted by @EricH, but instead of a typical six-wheel belt system, we were going to run one belt from the rear wheel.

Our thinking was that a belt would avoid the stripping issue because the distance would be the same whether the wheel were engaged or not. It would have to only go to one wheel, because if it went to both the front and the back, you would loose the ability to use the drivetrain as mechanum.

I like the idea of using one or more belts to turn the center wheel, and I drew it up similar to what @wgorgen suggested (correct me if I’m wrong) where the wheel is driven from the motor on the right side of the picture and is actuated down using the same pneumatic mechanism that the original used, just angled about 5 degrees to the right. 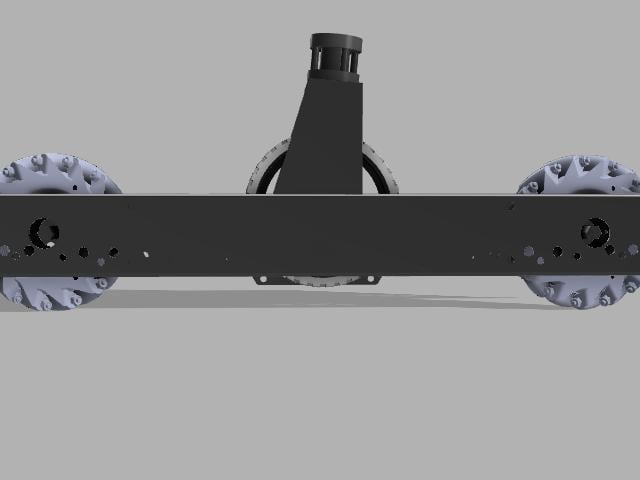 I am thinking about doing something like @GeeTwo suggested and moving the center wheel closer to one side but I’m worried that doing so will move the robot’s center of rotation when the wheel is down and mess up its position tracking in auto. Will this be the case?

One of the objectives of this project is to maximize pushing power when the center wheel is engaged, and since mecanums only transmit ~70% of torque forward because of the angled rollers, it makes the most sense to me to take as much weight as possible off of them and onto the traction wheel. Using the pneumatic cylinders in the drawing (1 on each side) gives a total force against the ground of 94 lbs. Assuming the robot is 150 lbs, this means that the total efficiency would be ((94x1)+(0.70x56))/150 = ~89% efficiency. If the wheels were moved closer to one end, the amount of force they could exert would decrease when they would eventually be able to lift up that side of the robot (the cylinder has enough throw for the center wheel to extend .125" below the plane of the two mecanums). The point at which this occurs would naturally depend on the robot’s CoM. Is my reasoning and math correct or does it not work like this?

If they had the same material and texture, there wouldn’t be a lot of difference. However, solid wheels usually have a higher CoF than omnis.

The issue with putting all the weight on the traction wheel when driven from one end is that you are then only driving with half of your motors at that point.

I doubt you’d want to use the hybrid mode for auto; I’m not sure how repeatable anything but a straight line would be. In any case, mecanum should provide enough traction for most auto routines.

That’s true. Pushing with only two drive motors sounds like a recipe for a blown breaker – or worse. I suppose this could be partially circumvented by using a shifter gearbox in high gear for normal mecanum operation and then shifting into a (very) low gear in order to push, but that is likely only adding a lot of complexity and weight for a very marginal increase in performance.

Now that you mention it, auto might be the time when mecanums are most viable since there’s no defense.

That is a good point about the power. We were just concerned about the mechanical linkage between the front and rear wheels. We thought we would lose the ability to strafe if they were linked.

Look for PTO (power take off) gearboxes for this.

At this point, you might as well do octocanum and have 4 traction wheels 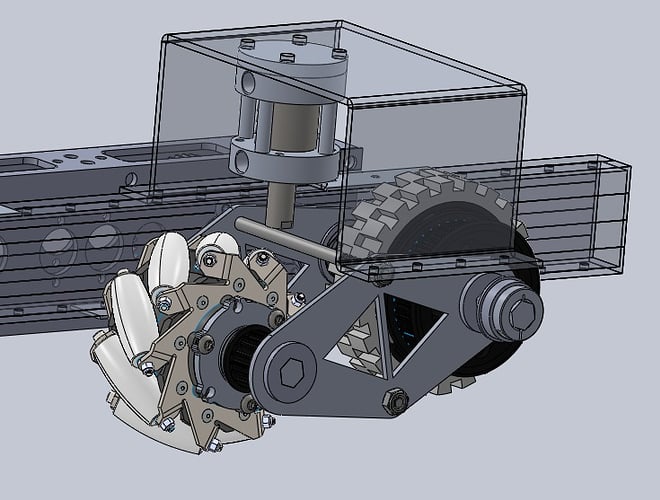 Swerve drive is certainly something that would be really cool to do (my team has never done it before) but it is something that seems very daunting both from a mechanical, financial and software perspective, but I won’t digress further as that is more of a topic for another thread. I guess this was meant to be a baby step from what we have been doing (KOP tank and mecanum) towards swerve.

This is why octanum usually has the traction wheels inboard of the mecanum. Ideally, mecanum wheels are on a roughly square footprint, and skid steer has a wider track than wheelbase to allow it to turn. If you rotated these modules the other way (or swapped the wheels around), you likely would have problems.