I had a pretty crazy shower thought about putting a few chunky capacitors on a circuit of the PDP to act as a “reserve” in order to minimize brownouts while keeping the pushing power of our drivetrain. I feel like this is definitely against the rules, but I’d like to hear your opinion, and how your team goes about managing, coping with, and generally avoiding brownouts on the field.

We avoid them by using the kit chassis, and keeping the batteries charged. Also, keeping all electrical connections tight helps.

The capacitor idea is interesting, but it’s just as illegal as adding another battery or two, and probably way more expensive for the same effect.

You’d need some fairly large caps to serve as reserves for FRC batteries, but it’s not a totally unreasonable idea. That being said, it is definitely illegal. Mitigating brownouts is a function of good current limiting, minimizing energy loss via runs of wire as short as practical, ensuring good solder joints / crimps at all points, keeping batteries well tracked and beaked at all critical points (something we admittedly need work on for 2020), and mitigating designs that require stalling motors for long periods of time (high current draw.)

Yes, definitely illegal. Depending on how you were planning on doing it, you’d possibly be violating R39, R47, R61, and R63.

Following down that path, a car audio channel recommended 1F per 1000W RMS. So this 4F audio product would work. It is 4 lbs though. And also, of course it isn’t allowed also, in part because you’d be adding additional capacity.

Setting side effectiveness, expense, and weight concerns, I’m unconvinced this is “…definitely illegal…”

There are some legitimate safety concerns regarding the safe storage of energy, safe discharge of the capacitors, and the impact of cycling those capacitors. But storing energy isn’t illegal. There’s a potential question of whether or not the capacitors could be charged prior to the match under R46, but this is electrical energy, so I would contend R46 doesn’t apply.

The presence of a large capacitor complies with all the rules cited above:
R39: Energy stored in the capacitor would still come from the battery.
R47: The implementation of a capacitor as described by the OP does not require alteration of the pathways described here
R61: A bank of capacitors can be purchased COTS
R63: Presence of a capacitor bank on a branch circuit protected by a circuit breaker does not alter the described power pathways.

Take all that together and consider such capacitors a “CUSTOM CIRCUIT” and the concept is legal. The implementation is where a team could run afoul of the rules.

Reads legal to me, as long as it’s on it’s own branch with other CUSTOM CIRCUITS.

You should really address the root cause of the brownouts first and learn to work within the bounds of the (legal) equipment and materials you have available to you.

According to this application note from a power supply manufacturer, you would need 15 F of capacitance to sustain 1200 W of output (12 V x 100 A) with the voltage dropping from 12 V to 8 V (where the Roborio resets, I think) for 1 second.

Even if you can accomodate enough 4 F capacitors to give you sufficient ride through, you may run into the following issues.

Setting side effectiveness, expense, and weight concerns, I’m unconvinced this is “…definitely illegal…”

While it may be legal by the rules, OP should consider the safety implications of this idea, specifically that the robot won’t power off as soon as the main breaker is switched off.

I feel like this is definitely against the rules

This is where my thoughts were at (along with @philso’s practical considerations). No matter whether the rules can be interpreted to say it’s legal or not, you have to convince a head inspector its safe.

I’m not a head inspector, but you’d be hard pressed to convince me that 1200W worth of stored energy in chemical-filled electrolytic capacitors has been properly designed and is totally safe to use on a crowded field.

Most folks tend to find a solution before the list is exhausted, hence why capacitor-backed solutions don’t appear very commonly.

All this being said. If you have time and money to spare, and sufficient expertise to deal with the high voltages and currents these devices generate, it could definitely be a great experiment - especially if you can show how it is done safely, there might be some lobbying FRC to make a device like this legal in the future.

However, Reiterating: BIG CAPACITORS CAN KILL YOU.

If I were to implement a big capacitor bank (which at this point there is a 1% chance I will) I would probably build a pcb with charge current limiting and an active transient current suppressor using some mosfet shenanigans, as well as a bleeder resistor or some other discharge circuit. If we really were crazy enough to slap a giant capacitor on our robot, I would be sure it is as safe as possible.

However, Reiterating: BIG CAPACITORS CAN KILL YOU .

See above my point about doing this safely.

Just like flywheels, capacitors have risks and potential dangers. Teams who use flywheels go to some length to ensure safe operation and to ensure the flywheel won’t break and cause potentially fatal injuries.

Given all the tradeoffs, I don’t see the value in using a big capacitor, but they could be used legally, given the right protections.

CUSTOM CIRCUITS shall not directly alter the power pathways between the ROBOT battery,
PDP, motor controllers, relays (per R36-B), motors and actuators (per R34), pneumatic solenoid
valves, or other elements of the ROBOT control system (items explicitly mentioned in R73).
Custom high impedance voltage monitoring or low impedance current monitoring circuitry
connected to the ROBOT’S electrical system is acceptable, if the effect on the ROBOT outputs is
inconsequential.

If I flip the 120 amp breaker and any part of the robot control system (motors, solenoids, motor controllers, actuators, power distribution panel, roborio) still has 12V on it from a capacitor bank, I would say you’ve altered the power pathway and the circuit is illegal.

R47 is also very explicit how the battery is wired to the power distribution panel.

@21brownz
I’d recommend a few things, since it seems like the single most significant goal of your thought is to get more drive train power to the floor. Brownouts should be avoided at all costs rather than designed as an intent. Being free of brownouts allows your drivers to push the envelope with more then just a drive train.

Here is a preview of the next iteration of my drive train calculator. This represents a full-weight robot with 4 NEOs attempting to sprint to 36 feet and stop. On the left, there is no current limiting - notice the brownout. On the right, there is a 60A per-motor current limiting, with no brown outs (all other parameters are equal). 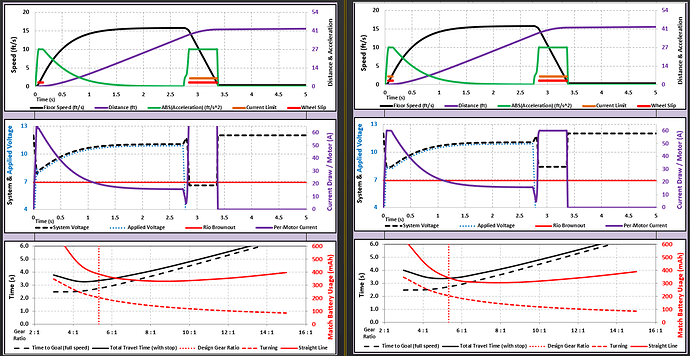 Just looking at this in the shop, so let’s forget rules for the moment. (this is just referencing OP’s question, not about making a better drive train)

Would you need 1200W?
The max draw of the rio is 45W and as I understand it, that’s the gating item on a brownout. What’s the feasibility of just supplying a smaller capacitor bank to keep the rio up?

We do something similar on one of our products using an uninterruptible power supply. One of our systems is controlled via a PLC and a proprietary HMI. The issue we have is it’s on a system with a decent sized diesel engine. If the customer doesn’t have a well kept battery or long wire leads, it can brownout the PLC and HMI during start up. Not an issue for the PLC as it boots in like 5 seconds. The HMI however can take 2 minutes and this is product is used in firefighting were time counts.
So we use a small UPS only on the HMI, not the whole system.

There are numerous capacitor banks on the 12V bus of every FIRST robot already.

How about putting the computer on a dc/dc converter basically a voltage pump with a Voltage regulator on the other end ensuring 12V to the roborio even if the power from the battery is like 8 v there are a couple of ways that come to mind. The roborio and radio don’t draw that much voltage. After the pump a pwm circuit similar to a switching powersupply could be made. Now that would still need some capacitors but of the cheap and small variety. The outputs on the roborio are Open Collector with a pull up resistor so that should make handling disparate voltages on both sides feasable. Not the question still is why are you running the battery down that much and what causes your brownout in the first place. also have not researched the legality of that circuit yet just talking of the top of my head

There are numerous capacitor banks on the 12V bus of every FIRST robot already.

Which are explicitly legal since they’re integral to the legal devices containing them, but none of them are large enough to power the RoboRIO through a brownout… Adding your own isn’t legal.