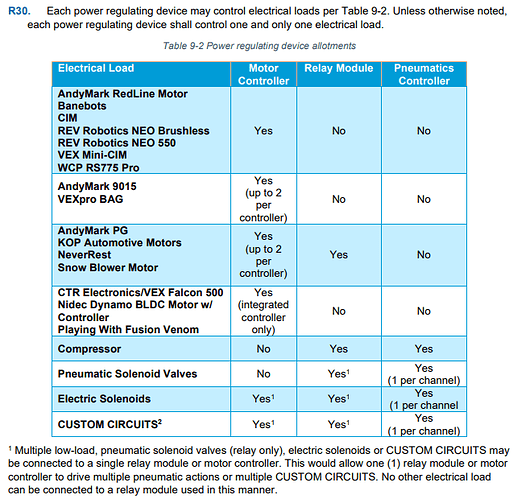 For FRC legality, only certain motors are allowed to be run with 2 per speed controller. They tend to be on the lower end of the power range. See previous post.

For practicality… again, if the motors are relatively low power, you’ll be just fine. On the other end of the range… not so much.

I’ve seen or heard of two different teams running multiple CIM-type motors off of one speed controller this year. One had two MiniCIMs in their shooter (and fixed it). That one… eh… Not legal, but you might get away with it for a while. The other had 6 motors in their drive running off of 2 speed controllers. (That one might have been NEOs, though.) My comment to the person who told me this was something to the effect of “and they haven’t let the smoke out yet??? HOW?!? !?! ?!?”

I don’t recall which controllers they were actually using, and I never saw it in that configuration, just heard about it.

Given the team in question and the person who told me about it… I can believe they’d try something like that. (The other one–two MiniCIMs in the shooter–I saw myself. That one didn’t make it to the regional like that.)

would it be possible to run each side using only one SparkMax controller?

As @EveryLittleBit has hinted to, absolutely not for that example. Do not pass GO, do not collect a rectangular blue boi.

As @EveryLittleBit hinted at, but I wanted to make crystal clear (for those that are not as familiar with Brushless Motors), you cannot run more than one brushless motor with a single motor controller. Brushless motors commutate the power to the coils based on the shaft position (which is sensed by a sensor in the motor). If you tried to feed that same communtated power to a second motor where you were not sensing the shaft, then if the shaft was in a different angular position (which it most certainly would be) the power would be applied to the wrong phase and the motor would not work properly and would most likely burn out very quickly (letting out all the magic smoke that makes them work in the first place).