Hi, I’m asking if you know for a database motors that did your team use where we can search and to select the correct motors and gearbox to a mechanism we want to make.

And I would be too grateful for any comment o recomendation to how to select the better motor to a use on a mechanism, thank you so much.

Here are some resources to check out: 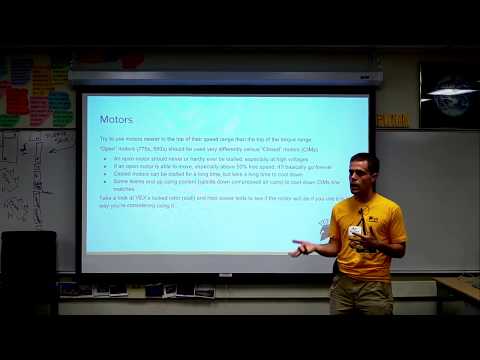 With any gearbox, chain, or belt transmission, make sure every component is able to take the amount of force required. If you are lifting a 5kg weight on the end of a 1.5m long arm, you require at least 73.5Nm of torque. If you use a 24T #35 chain and sprocket, this puts 2 tonnes of force on your sprocket teeth and chain links. Your bearings will also be loaded with a similar amount of force. We learned not to do this the hard way.

To reduce the chance of things breaking, we used a smaller gear reduction, because that reduces the force the motor can put into the system. We also used two 60T sprockets side-by-side. In our example this would reduce the force to 400N (as long as the sprockets take the load evenly), which is still about double the rated working load of the chain, but within the maximum tensile strength, which was good enough for Australia™.

Thanks for the shoutout! Just want to add that calculator is a bit outdated now, everything in there and much more is available in my AMB calculator (linked above)

Is that the down-under version of “close enough for government work?”

Excellent advice. I might add that motors must also be sized and geared to take the heat that they produce, due to their own inefficiency (primarily in the form of i^2 x R power dissipated in their windings) over the course of a hard match or long practice session. Sometimes an error in that sizing or gearing can be compensated later, by adding heat sinks or fans, but often such an error will end up limiting your mechanism’s scoring potential. This effect almost always shows up late in an important match. As Big Al is fond of saying, anything that can fail, will fail, and it will fail on Einstein.

Absolutely. In our experience, if we notice a motor getting hot: (~80 degrees C or hotter)

Ideally this iteration happens in the first two weeks with prototype mechanisms.

The soul of engineering.

I recall John V-Neun advising, “You don’t have to test every part of your robot — just the ones that you want to work.”

This is helpful if using vex planetary gearboxes.
https://docs.google.com/viewerng/viewer?url=http://link.vex.com/vexpro/pdf/VersaPlanetary-LoadRatings

Thank you so much for the video and all the links! And I want the question to your team and the teams that are sawing this, When you are making a mechanism, did your team design it on CAD before select the motors and gearboxes to check all the data correctly on these data bases or you made a pre-selection based on what weight (for example) you think it would had or things like that?

We always know what motors we want to use before we CAD the robot. Sometimes the choice will change due to cost, size, or weight problems, and we will change it in CAD or after-the-fact.

Many of our mechanisms are first made out of plywood, using the same size, motors, wheels, etc. as the final robot. This way we can change the motors and transmissions before we commit to drawing it in CAD, buying the metal, and manufacturing the final robot.

If we think it will work without prototyping, we will CAD the mechanism without a prototype, but the designer or controls team will have already chosen what motor they want to use.

If you’d like see more information about calculating power requirements and choosing motors, see how much you can get from the video and the other links, then ask any questions you have from what you’ve learned there.

In our example this would reduce the force to 400N (as long as the sprockets take the load evenly), which is still about double the rated working load of the chain, but within the maximum tensile strength, which was good enough for Australia™.

In some instances, shock-loads will mean you will want something like 5-6 X margin. This includes when there may be impacts with other robots or the field or a heavy arm “bouncing” as a robot drives over an obstacle. The ME’s I work with said it is difficult to predict how much margin is needed for shock loads. This leads back to the JVN quote that @Richard_Wallace posted.

All valid questions and answers so far.

As a cheat code (because this is a lot of engineering to digest in the few weeks before Kickoff), I would highly recommend Spectrum’s Guide to the FRC MCC. It’ll help hem you in on what parts to consider (the only unlisted ones I’d say are in bounds would be VEX’s counterparts to the RedLine and NEO, the 775pro and Falcon 500), which will keep you from doing particularly silly things.

(Example of silly things: A team with a lot of people I know and think highly of had a stance of “order whatever the kids think is best, because I don’t know any better as coach”. Well, the programmer noticed the pretty ancient and underpowered AndyMark PG motor had a built-in encoder, and encoders were the best way to ensure a mecanum drive had its wheels going at the right speeds. So they said that should be their drive motor for 2017, a game with tons of full-field crossings, and nobody knew better. The robot was absurdly slow as a result, to the point that their coach had me come in that off-season and window-shop the big three suppliers with their kids.)

I’d also suggest this page from VEXpro; there’s a lot of useful information inside on motor selection.