My team is thinking of using this actuator to make a better Hatch Panel mechanism for the off-season. But we can’t tell if it is legal to use or not. Could anyone help shed light on whether or not we can use this. If we can’t what’s the next best option? 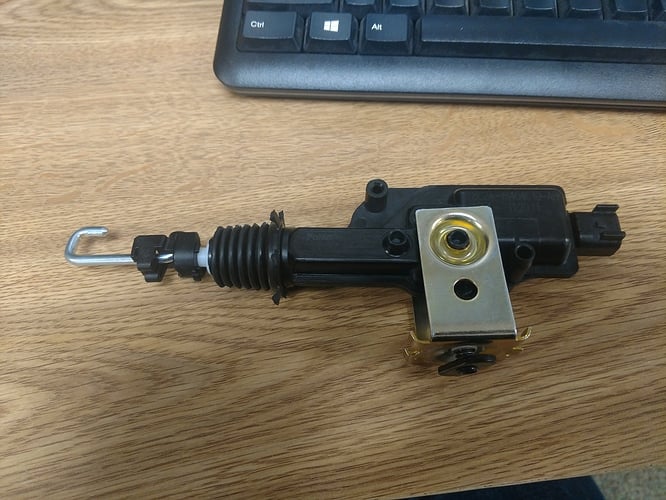 What is it? do you have a part number we can lookup?

It’s this part from a Ford, I’ll add that to the main post.

So is it just a solenoid? If so, you should be fine as long as you control it from the PCM and the stroke length is an inch or less. If there’s an actual motor, you’ll want to find a way to replace it with a FRC-legal servo or motor in order to move it.

Based on what I see on that website, I would have to say no. It looks too much like a motor/gearbox combo, and the built in motor would be illegal. The product page does not call it a servo, and I doubt it could be controlled like a servo as well, so that rule doesn’t apply. And it’s probably not an electric solenoid actuator, so that rule wouldn’t apply. Of course, I could be wrong… but you would want documentation of what it is and that it meets the appropriate rules, and then I’d be happy to be convinced!

I would suggest opening it up to see what’s inside. Assuming there’s a motor, you may be able to remove it and adapt the rest to use a legal motor instead. There’s nothing inherently illegal about the gearbox or output it’s attached to.

It is a motor with a transmission. The transmissions do fail on these as they are all low tolerance plastic gears. Got one that is starting to fail in my robot hauling van. (Ford has used that same actuator, with different rods on millions of vehicles) Having opened failed ones up I can tell you that the motor is not legal, and even if it was that is only designed to flip a lever/move the manual lock rod and does not have much force, nor can it handle that much force.

Definitely not legal now, but it was (kinda) in the past. A few times, 548 was really close to using them to pull out pins holding stuff. They are door latch actuators. The rules used to allow all automotive door, window, seat… motors. So they were technically legal, but not anymore.