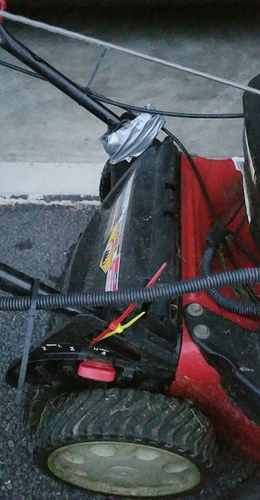 Snapchat-19728513931332×2560 748 KB
Was mowing the lawn, and somehow the bars sunk into the blade path, killing the mower. Blade was not damaged in any way. Found the screw-lock that was supposed to hold the steel bar in place and realized it was rusted and worn. Inserted into the slot and duct-taped it tight (made sure it wouldnt budge) and in the process i decided to lock up the right side too… but with zip ties (we lost the screw-lock years ago).

After that, it wouldnt start. This mower is pretty stubborn where it would only start if the gas was in at least 30 minutes prior to use (we just fill it after every use and it will run on the 2nd pull; about a week or more between cuts).

6 years at most, still pretty good.

Any ideas on why it wouldnt run?

Found the screw-lock that was supposed to hold the steel bar in place and realized it was rusted and worn.

It only had one screw-lock, under the duct tape (left side). Zip ties work great too. Some how the screw-lock had fallen out at ~45° angle.

Did you try restarting?

After that, it wouldnt start.

And less likely as it was running earlier today, but worth checking:

Was the cord unusually easy or hard to pull, or about normal?

Normal, at least compared to when i first started it.

How many times did it spin

How do you calculate this?

Did you get any combustion sounds?

No, and there was no smoke either

Any other unusual symptoms?

Not that i know of…

Did you re-prime the fuel (squeeze the bulb that most units of the last decade + have)? I find it best to pump it until the bulb has more fuel than air.

This mower doesnt have a button

As you reconnected the arms, check to see if you mis-adjusted or disconnected the kill cable. This is connected to the dead-man switch, and needs to pull a lever near the carb.

Nothing seemed out of place when i checked

Did you possibly move a throttle adjustment? Many don’t have a manual adjust, some do. Based on the number of cables I see, it seems likely you do.

Does this mean the speed cable? If yes, i would say i did not move the throttle cable enough for it to be disconnected.

And less likely as it was running earlier today, but worth checking:

Can’t remember how old the gas is, we never check the spark plug/air filter

Did you try restarting?

Yes, checked the fuel and saw it was a bit low and added a little bit. But it didnt want to start before i added either

Found the mower, Troy-bilt doesn’t list it anymore. The Electric Start died shortly after we bought it, and we only replaced it once, which died again.

How do you calculate this?

You can hear how many “thump” sounds are made with the compression. My understanding is that single-cylinder engines, both two- and four- stroke, make one compression thump per rotation when they aren’t actually running.

No primer bulb? I haven’t seen that on either two or four stroke lawn equipment in well over a decade, but I don’t change out very often; my 2001 lawn mower lasted until 2018, and these days I have a 4-stroke trimmer because I found that with the number of roots I have, this is easier (and probably safer) to run than a mower. Before then, IIRC, you had to slide the throttle switch all the way hot, pull several times, then back off once it started.

If your mower is six years old, and you “never” check the filter and plug, do so! I’ve found that (just doing my own < 1/2 acre lot), it makes sense to check these at the beginning and around the middle of each mowing season. I usually find the filter can use the cleaning, and replace the plug about once every three or four years. On gasoline age, the only problem is if it’s measured in years rather than months as long as you keep it capped. I don’t recommend it, but I’ve actually used three-year old gasoline to mow a lawn in 2008 when I stockpiled after Katrina.

Oh - another thing to check, though again on the unlikely list: Is the spark plug cable firmly installed on the plug?

The Electric Start died shortly after we bought it, and we only replaced it once, which died again.

Both your linked photo and the candid photo show a pull string. I guess that explains what appears to be split loom tubing in addition to two cables. Did you actually retrofit a pull string on an originally electric start motor?

That’s such a shame. My mother has a sewing machine she bought before I was born (1962), and we found the manual on-line earlier this year (2020), and @PereBear and I fixed it working from that manual. It also makes me glad I downloaded both the user and parts manuals of the Troy-Bilt 4-stroke trimmer I bought in Spring of 2018. (I’ve already drilled out a rivet, so I’m sure the warranty is void.)

Did you actually retrofit a pull string on an originally electric start motor?

We didnt modify the mower in anyway, it was originally meant by the manufacturer to be able to start by turning the key, or by pull.

Wow, I’ve never seen that, but I’ve tended to buy simpler things over more complex ones.

What model info do you have on the mower? It never hurts to have more eyes looking.

…and at the end of the day (after checking plugs and filters and such), if CD can’t help, it is likely worth taking this thing to your nearby Ace or TruValue or LawnMowerMan*. Let them know how much or little you’re willing to spend to keep it going up front. [At six years old, I’d be willing to spend about half what it cost for a new similar mower; your threshold may vary.]

* Intended a bit metaphorically, but Metairie LA (where I lived at age one and two, some of my twenties, and most of my thirties), actually has a business called “Lawnmower Man”; this guy’s business is fixing them. You may have such a specialist in your area.

It’s possible that the sudden stop sheared the key that holds the flywheel in place. This would change the timing of the spark since it is usually created by a magnet built into the flywheel. I think that it is a long shot, but is something that I would look at.

Pull spark plug. Check for spark. If you have a spark, add a little gas into spark plug hole, replace spark plug and try restarting.

I’ll second this. It was many years ago but I have had the flywheel shear a pin with blade impact. If this is your problem, here is a website that shows a fix for a lawnmower hitting a tree stump.

The damage to a lawnmower resulting from hitting a stump or rock and the steps to take to get the mower running again.

Wow! This is one of the best robotics/FRC discussions out there!

I plan on running it later this afternoon, if it doesnt start, i’ll check the key… Or should i check the key before trying to start it up?

I had this happen to my old ride on mower when it accidentally ran over a tree stump and stopped the blade.

Getting the flywheel tight again after replacing the key is tricky and if you don’t get it on tight enough, you will shear the new key almost immediately. On most lawnmowers, the shaft that the flywheel is installed on is a tapered shaft and you need to get the bolt torqued to the spec value to get enough friction to keep the flywheel from slipping under the normal torsional vibrations of the crankshaft.

Pro tip #1 - order multiple keys. They are cheap and if you do shear the new key you will be really mad that you only got 1.

Pro tip #2 - if they make a wedge block that locks the flywheel in place by engaging with the gear teeth on the rim and the engine block while you torque the bolt, get that as well. It is worth it and you will probably not get the bolt tight enough unless you have a way to hold the flywheel.

Pro tip #3 - heating up the flywheel to about 250 - 300F before installing it will make it much easier to get it tight. The thermal expansion of the flywheel will allow the flywheel to slide further onto the shaft and makes a much tighter fit once it cools back down. I recommend using your barbecue grill to do this rather than your kitchen oven. Even if you think you have cleaned all the oil off the flywheel, as soon as you heat it up, you will still get offgassing.

If the key was sheared, the blade shouldnt rotate, correct? Simply from my tempted tries last night, i can confirm the blade was turning as the grass had marks from the blade.

How to do the spark plug check safely altogether?