My command can't be used with ConditionalCommand 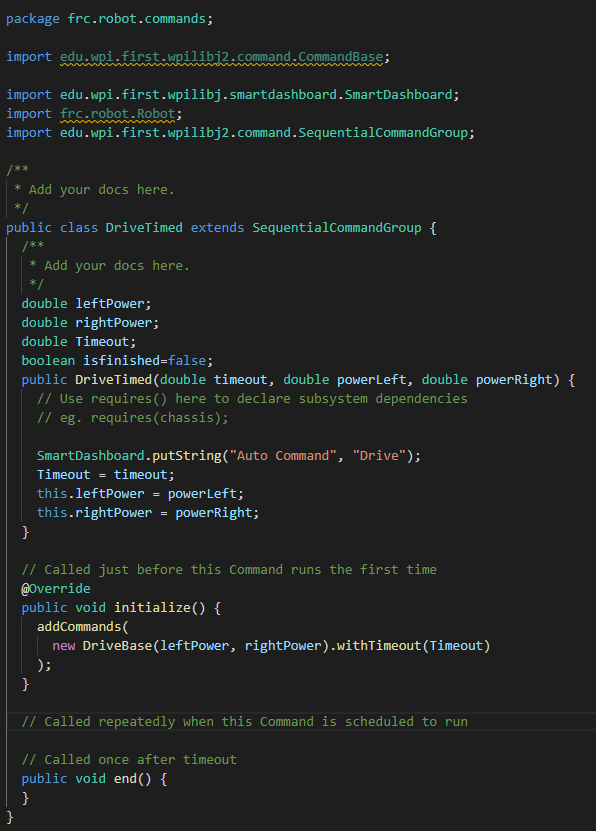 Here’s the autonomous where I call it:

Why do you not just put the two DriveBase(leftPower,rightPower).withTimeout(timeout) command into the ConditionalCommand?

just found out drivetimed isn’t the problem, but the condition is. When it says the 3rd param needs to be a “condition”, can’t I just put in a boolean or put ::get next to a boolean?

can’t I just put in a boolean or put ::get next to a boolean?

You can’t just put in a boolean, because the condition has to be evaluated at scheduling time, not at command construction. You have to give it a method that returns a boolean.

Unfortunately, Java is not such a powerful language that you can do boolean::get (if only!). You’ll have to write a lambda expression.

According to the documentation, the last parameter needs to be a BooleanSupplier. A BooleanSupplier is a function having no argument as input, and returning a boolean as output.

If you need additional logic, a BooleanSupplier can be created using a lamba expression (e.g. if the condition is Robot.getTurn() must be greater than 5, then this could do the trick:

The last parameter is called a lambda expression. It can be used to declare a BooleanSupplier:
e.g. BooleanSupplier supplier = () -> { return Robot.getTurn() > 5; };

I hope this helps.