After chatting with @BrendanB and in light of speculation regarding the champs news we decided to do some quick and very bad analysis of rankings.

Suppose the (highly hypothetical, theoretical, and possibly unrealistic) suggestion for NE that worlds qualification is determined by district points at the end of the regular (2-event per team) season. The question really is: how often do teams move up after qualifying for DCMP?*

So I made this relatively not-horrible spreadsheet!

I honestly don’t really know what to make of this data.

I’d love to hear your thoughts on what we should make of it!

note: What this question is really getting to is: “how many teams would have gone to worlds if there was a DCMP, instead of no DCMP”

edit: I made a slight spreadsheet edit to include an average rank delta for the top 16 teams (or, roughly the # of slots NE is given if it’s roughly half of what was expected in 2020)

I did a quick analysis for myself just like this for 2019 and saw similar results. I would be interested to see which teams earned or lost CMP qualification after DCMP - essentially see the real impact the DCMP has on championship advancement.

@brennan-macaig thanks for posting and doing the work of compiling the data after our conversation.

I updated his spreadsheet to mark teams who qualify or drop. It gets murky with pre-qualified teams, awards, and declines. 2018 had less information available.

Seems to be about 3-7 teams who finish in the top 33-37 teams based off our allocation of slots who fall out qualifying for the World Championship when the District Championship concludes. Reverse is also true. Awards obviously account for several with about eight slots for CA, EI, & RAS.

319 made it to CMP in 2014 as one of the last invites because of our points at DCMP and a few declined invitations to CMP.

Thanks for this @brennan-macaig!! I spent 15 minutes playing around with the data just to try and see if there’s anything that jumps out as far as ranking cutoff pre/post DCMP at various levels.

Here’s at least a colorful chart to look at that shows how many teams move in/out of the various ranking cutoffs I arbitrarily chose: 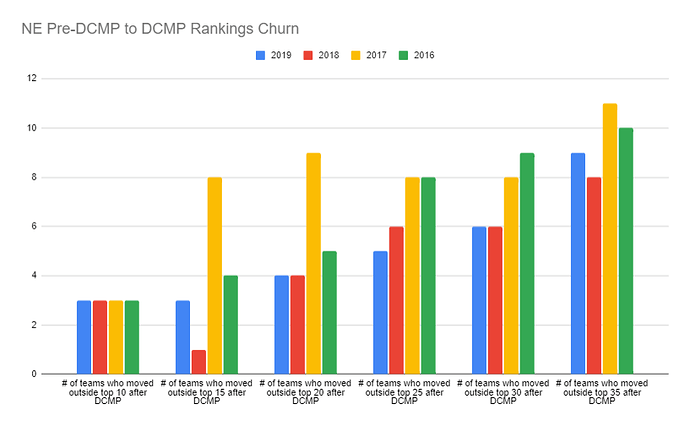 Similar conclusion as @BrendanB , there’s somewhere between 3-7 teams that consistently shuffle pre/post DCMP, even as you get up to the top 30 rankings.

This is actually a much better way to visualize what I was trying to get to, but I wasn’t sure what I wanted when I set out making the sheet. Thanks for including this!

The conclusions that I’m willing to draw from all of what I’ve seen / thought about:

Now, for some opinion: I’d love to see FIRST adopt a global ELO system (or OPR perhaps) and simply invite the top 450 teams only to see how good it really can be. That would be the most competitive (and perhaps least representative) world champs ever, easily.

I disagree, and in fact think the inertia of the ratings favors teams that lucked out at an early event when teams haven’t figured out how to play the game yet and many teams are still getting their robots working. My personal experience is seeing teams dominate an early district then middle at a second and become irrelevant by the DCMP, but still qualify because they stacked up points at a weak early event. I think the later events should actually be weighted higher because that’s when the game starts to resemble how it will be played at championship by high level teams.

Back in the pre-district days a well known strategy to get a championship slot was to cherry pick a weak week 1 event and get your slot before going to harder events with real competition.

I like the idea of ELO but I’m still not sold on it for FRC due to the number of teams and the minimal interaction between districts and regions. Even within NE theoretically I can play a subset of teams that has no crossover with a team from Maine within the same district until we get to DCMP so our ELO values can be skewed based on the adjusted level of competition. I think within a single event it provides the most relevance. However if you can explain to me how to compare the ELO scores obtained at Granite State can provide a direct comparison to Alamo (or any 2 events with no cross-play) I’d like to see it.

Presumably this 'highly hypothetical" suggestion would involve byes from DCMP? Though given the open thread about who thinks they would go if qualifying for Worlds, DCMP might be the best (or only?) end game.

After the Championship announcement, NEFIRST setup a Townhall for this Thursday to discuss the impact and hear from the community.

They also included a survey with questions about how teams would feel if some or all Championship slots could be allocated before the DCMP to allow the normal 1.5 week turnaround for teams to make plans to get to Houston.

That sounds like a disaster week one events are already hard to fill and you want to make them worth less points? Yeah that would force a mad rush for later week play and look getting a things right early isn’t luck it’s called good strategy

You might be able to preallocate most of the slots and leave DCMPs to fill out the rest.

Not relevant to the thread topic:
Week 1 events are hard to fill because no one wants to Beta test the game. Too many of us that have been around have seen significant rule changes or changes to enforcement of rules combined with fields that don’t work and software issues. These are also part of the reasons why I made my comments about early events meaning less to how good a team actually is verses their early season success, because they game played week 1 is not the DCMP or CMP game.
While this has gotten better, for years teams avoided week 1 for these reasons and the mindset has set in for many long time teams.