We wanted to make you aware of another great resource: the Adobe Education Exchange. EdEx is chock full of student- and teacher-sourced content to help get the most of Adobe Creative Cloud. It’s got videos, examples, lesson materials, and a vibrant community that focuses on creativity in education.

Each FRC team’s lead mentor needs to invite a mentor to the Adobe Creative Cloud role in the Team Management portal. Once that happens, the mentor will receive a set of emails asking for approval, and once that’s done, they will get access to Adobe Creative Cloud within an hour or so. Please take advantage of this benefit today!

Thank you! This is much appreciated. i have selected my mentor and he is working on figuring out how to give students access. Does he have to login each time? How does he allow students to use the software?

The gift to the team is for your mentor. That mentor must sign in to Creative Cloud to use the software, using the ID they created when they accepted the grant from FIRST. The license is not for students as named users.

Adobe does give its Spark family of products free to any school who asks, so if you are associated with a school, have your IT lead contact their Adobe reseller and ask for the free Spark. Spark has tools that allow anyone to tell compelling stories with video, make single page web sites, and create social media content. It’s pretty awesome, and great for getting the team’s story out!

Can you provide a better description (or screenshot) of how to designate an Adobe Creative Cloud mentor? I’ve looked through our team dashboard but haven’t seen an option for it.

The Lead Mentor needs to invite a person to the role. This sounds weird, since the person may already be a team mentor, but it’s the right thing to do! 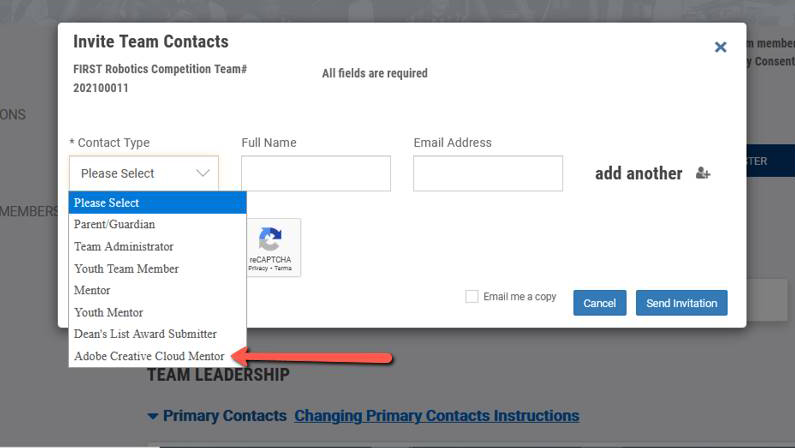 We’ve been using Creative Cloud suite for the team with no problem. Yesterday, I got an email saying that my administrator for FIRST removed my access to the All Access Plan. Anyone else have this happen to them?

The virtual KoP says that the donation is good until November 19, 2021.

I believe everyone that had a CC account from the FRC KOP got the same message, I haven’t heard of any fix yet.

Hello, and I’m sorry that there is a disruption in the Creative Cloud Benefit. As many of you know, Creative Cloud comes in one year subscription periods. We granted these to FIRST in September of 2020, so they are expiring now.
In reviewing the number of teams who took advantage of the benefit, we determined that there were very few teams who assigned a Creative Cloud mentor. We know there are a wide range of reasons for this, not the least of which is a global pandemic. However, we are re-evaluating the program, and we would like your help.
Please, if you can, tell us about how your team uses this benefit, the kinds of things you are making, and how you are helping students learn about graphic design, video, social media marketing and more via this benefit.
I am the messenger, not the owner of the decision, so please be graciously professional here.

Yeah not having in person events or normal video and photo opportunities cut down on our potential uses for it this year.

We would definitely want to take advantage of it if it was offered in the future.

Creating posters, editing videos for YouTube, editing photos for flyers, judge pamphlets and promo materials. At some point in the future we were also looking to have a website rebuild using the tools as well.

I’m not 100% sure if training materials are included but if they were that would help a lot in getting new media students started.

Our school has computers for every student, and each has an Adobe CC license, so we were looking at the ability to help mentors who are not teachers at the school get access to CC to help work with the students on their materials. For us, being entirely virtual last year, we didn’t sign up for the benefit as the process was a little unclear when we first looked at it. (It looked like 1 license and we weren’t sure who to best assign it to at the time.)

Context: Our high school and associated university students (including myself prior to this school year) already get ACC accounts. The main reason we would use the one provided by FIRST is to give it to a mentor not affiliated with the school (not an issue last season) or to install it on one of our team’s laptops (not in person last season).

That being said, a few team members did use Photoshop and Illustrator to create promotional material for attracting new team members or sending out newsletters to students, parents, and the community. This is something we plan to continue in the future, so we would like end up using the ACC license from FIRST.

We used it for photoshop and premier pro to help with our entry into several events - including purchasing stock licensing from Adobe.

Having CC this past year was awesome and a huge win. My hat is off to whomever it needs to be at Adobe for getting it into the hands of teams.

If the goal is adoption of these products by teams into their workflows… and they are amazing but I’d be lying if I said there aren’t a ton of open source and less-well-known competitor products that we had been using and can easily revert to… then making the consumption easier by teams should be the priority. Making it easier for teams to enable 2 or 3 individuals with an account/access would be very powerful and a great way to increase adoption.

Part of the reason for a lack of adoption, without any doubt in my mind, is the convoluted process of assigning a “creative cloud mentor” and making it harder to consume for students. Most of us aren’t going out and finding a new mentor for Adobe so we had to create alt accounts for the FIRST Dashboard - which is not easy to use in the first place.

And yes… there are obvious ways around this problem but it would be nice to just give students a key or add them to an account and let them have at it without having to deal with the work-arounds.

The other thing - and maybe it is being done but I’m not sure as I don’t manage one - would be to make FTC teams eligible for this. There are a lot more of them and I think a lot of the best robot team marketing materials I’ve ever seen have come out of FTC.

First, I cannot thank those at HQ and Adobe enough for acquiring these licenses. It did mean a lot to our team though we did not take much advantage of ours.

We are in a similar boat as many of the teams who posted above. We used Adobe for Graphic Design and would have used it for video editing as well, but we were unable to do much with either due to the pandemic.

We do have some licenses in our district, but they are not easily accessible to students (though they are for CC, installs on personal devices are banned). So, I was ecstatic about the opportunity to use Adobe products with the team. TBH the biggest use we got out of them was to do some graphic design including team fonts. District machines block font installs (for good reasons), and our tech department blocks adobe installs on non-district devices (also for good reasons).

In the past, we have used Photoshop and Illustrator heavily for designing logos, T-shirts, and buttons. This was prior to the pandemic on school computers. With the new service, we wanted to introduce students to Lightroom, Premiere, and other CC products to improve our web design, media organization, and footage. However, there are many reasons this did not happen.

Because of this, we did use it, but neither for much nor that often.

Here are my suggestions to help small teams like ours (or larger ones) in a similar boat.

Please, if you can, tell us about how your team uses this benefit, the kinds of things you are making, and how you are helping students learn about graphic design, video, social media marketing and more via this benefit.

We used it for photoshop and premier as well. There wasn’t a Chairman’s award video requirement last year but we just began the preparations and getting students ready to make this year’s video in premiere. We were hoping to integrate it into more of our media this year as well.

Thank you for helping arrange this.

I just found out about this program in this thread and I imagine there are many other teams who don’t do the best deep dive into vouchers in an odd year.

Hopefully this can be an option next year. The limited season really hindered our use of vouchers and limited communication for what was available.

Hey Lockjaw - we’re in a similar boat as others have posted that we were so looking forward to this donation, but we were so limited in what we could do that utilizing it this past year with the very small, focused tasks we were doing just didn’t fit - we were doing good just to re-use the robot we built in 2020 haha. We will absolutely be taking advantage of it this coming year!

I’ll echo some of Marshall’s comments above. Figuring out a way to allow more than just 1 student to use it would be great. Having it tied only to a mentor account will make some things difficult. We likely wouldn’t have it running on a team computer at our shop, but rather allow students to work on it from home. I think it’s hard to do that in the current set up.

We likely wouldn’t have it running on a team computer at our shop, but rather allow students to work on it from home. I think it’s hard to do that in the current set up.

This was our idea as well, and getting that to work remotely was difficult to say the least.

We cut the hypest hype video that 1293 has ever put together for recruiting. Lots of graphics that were a notch above our prior output too.

I was certainly the primary user, which tends to happen when you’re down to three kids in the middle of crunch time. But I hope we get the opportunity to rack 'em up again with our regrowing team in 2022.

With this year not having as much participation from my team, the apps were used entirely, but I also help remotely with my team, s well as regional planning committees. So having access to the cloud, being out of college was greatly appreciated. With in person events happening again I will definitely be using more of premiers and Lightroom.