Question – how do NEO motors compare to 775Pros? My team has used them in the past, but hasn’t in a couple of years, so I’ve never had any experience with them. This year my team used basically all NEOs for anything that needed more than a NEO 550 could do, but I’m going through old lessons and reading that 775Pros are good for whenever you need more than a 550. For teams that have used both 775Pros and NEOs, what are your thoughts? And when do you choose one over the other?

Also, we also switched to using MaxPlanetary gearboxes instead of VersaPlanetary because of their compatibility with NEOs. If we do start using 775Pros again, is it better to use them with VersaPlanetary, since they’re from Vex, or are MaxPlanetaries still better?

You can look up some of the differences yourself, but it really comes down to brushed (775Pro) vs brushless (NEO).

775Pros are Brushed motors, just like CIMs, MiniCIMs, Bag motors, RS-550’s, etc. This means they have metal brushes that contact the rotor of the motor. They’re super simple mechanically, generally cheaper to produce, and can function without any kind of motor control (apply power to the leads, and it runs!) 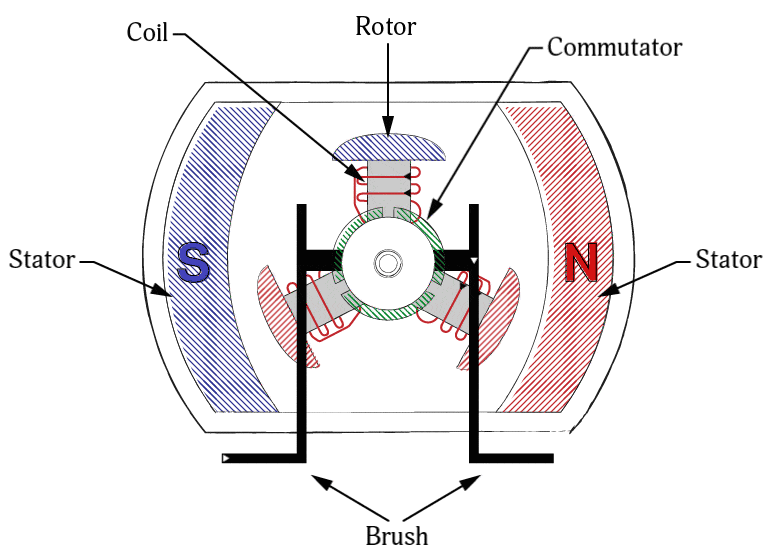 Neos, Neo 550’s, Falcons are all Brushless, which have a number of advantages over brushed motors, including them being lighter, they produce less heat, and have less electrical noise. However, they require motor controllers. This isn’t a major downside in FRC, because we tend to use motor controllers anyway. 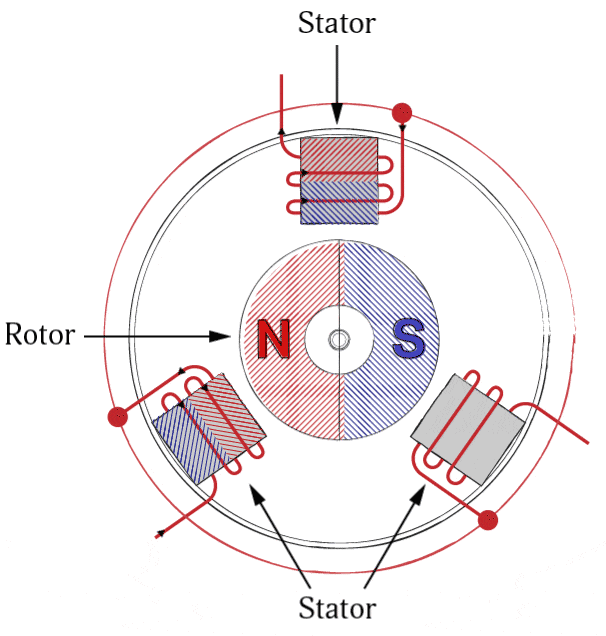 This does, however, depend on what resources you have on hand, how much space you have for the motor in your mechanism, etc.

At this point, we are pretty much all NEO and NEO 550. We have some RedLine stuff kicking around (and used one in our 2021 rebuild out of cheapskatery), but it’s really tough to beat the power, built-in current limiting, and ease of integrating encoders.

We’ve also used full-size NEOs in places where we might’ve normally only needed a NEO 550 (or before that, the 775Pro or RedLine) just because it packaged better. For example, take our 2020 yeet drums to kick out game pieces into the lower port. Two NEOs on that is hilariously overpowered, but it would’ve required significantly more manufacturing (and probably a chain or belt run) to package in a planetary gearbox like we did on the conveyor belts where we had the space (note the two blue Sport gearboxes on the diagonal member). 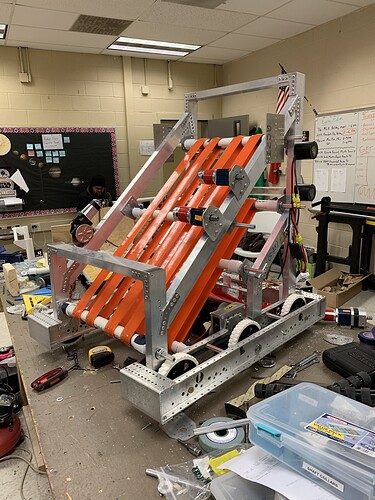 As to your other question: 775s will run just fine in a MAX Planetary. We converted from Sport gearboxes to the MPs this year (with the UltraPlanetary for high speed NEO 550 applications), and we’re pretty happy with the versatility and load ratings.

To add to all the other information,

775s are a small, very high power brushed motor. They have a much higher RPM than a NEO or falcon, with around 15% less power. As a result, for pretty much any application you are going to need to use a gearbox or other significant reduction and it’s going to have to be more than you would need for a Neo or Falcon to achieve the same speed. In most situations the 775 is going to end up being very comparable to the neo or falcon in weight when you take the gearing into account.

The 775 is physically smaller than a Neo or Falcon and that works to its benefit, however the smaller size also comes with reduced thermal capacity. A 775 will fail much faster than a Neo or Falcon. In addition, the way most teams gear down the motors (planetaries) will result in the overall length of the 775, Neo, and Falcon being very compariable.

There are vanishingly few situations where a 775 has a compelling use case. There might be a few, but I can’t think of any where I would legitimately use one.

That said, we’ve found neo550’s to be acceptable, but their reduced thermal mass also means one mistake ends in a toasted motor. So in that vein, there are fewer and fewer situations where I will willing spec a neo550 unless I’m forced into it because of space considerations.

This year we used 550s on our swerve steering, turret, and hood. But only because we didn’t have the money to spring for Falcons, and Falcons were rarely available.

We actually gifted all of our brushless motors (around 40 775s and a comparable number of cims and motor controllers) to a low budget team earlier this year because we doubted we’d use them and they needed them far more than we did.

550s work just fine with versas. That’s what we used this year.

Aren’t 775s around 4x less powerful than NEOs/Falcons? IIRC the 775 has a stall torque of less than 1 N-m, whereas the NEO and Falcon have around 4.

That is a typical misconception when folks are learning about motors.

Torque is a measure of force. It is not a measure of power. Force can be changed by changing your lever arm (gear reduction). So once you slow down the 775 through a gear reduction, the torque will be a lot more compariable.

I’d put it 450-500 for the NEO and Falcon 500. Both are rated for more (VEX tests them at 516 for NEO, 783 for Falcon 500), but consider that past about 500 watts you’re placing a bet on your 40A breaker’s trip times (in that 12.5 volts * 40 amps = 500 watts). That can be made a safer bet by designing around the breaker’s rated trip times, using the better-rated REV breakers, only using new ones that haven’t been tripped, and by ensuring your electronics don’t start a match hot–but because we live in a world where Goofy Things Happen, there’s always some small amount of gamble to it.

775s are great power for the size (we even used them in our drive systems back in the day), but all the advantages FRC brushless motors have (performance, integrated sensors, low speed torque, etc.) make them hard to justify anymore (assuming cost is no issue for you) in my opinion.

That said though, when you consider the difficulty (extra steps, weight, size, etc.) of integrating a NEO/Falcon into a planetary gearbox or other lighter-duty mechanisms, and the huge performance gap between those motors and the NEO550, it does make me wish someone would develop a 775-scale brushless motor for similar types of applications where you might want to use a NEO550 but need more power (but not enough to justify the size/weight or a CIM-class motor like a NEO/Falcon).

A couple of advantages of the 775s: Motor/controller combo slightly to lots less expensive. No risk of encoder cable being snagged. This is important if your motor is in a exposed position like on a intake. Also if the motor needs to mounted a distance away from the motor controller there is no encoder cable to worry about.

In most other cases the brush-less motors are better.

I’m still waiting for someone to release an FRC motor that is 300 Watts mechanical output, and 50 watts for a separate fan motor that always spins (when there’s current to the main motor), such that it can be stalled at full current indefinitely.

Current limiting is your friend. We always apply this, especially with NEO550s, and have it set so a stalled motor has a lot more time before it cooks. When 100% of the input power is being turned to heat, a fan can also buy you some time, but probably not indefinite time.

Current limiting is your friend.

I want all the current tho

a fan can also buy you some time, but probably not indefinite time.

Here’s something worth considering:

Do you really want all the current when it will smoke the motor in 2 seconds? You should never stall a NEO550 (all motors hate being stalled), but if you are going to run it slow/stalled, current limits are really essential.

The motor windings can only dissipate so much heat to the air, and will not all be kept at the same temperature by even a whole lot of airflow. It would be interesting to see how long a NEO550, with independent forced-air cooling, could survive 80A. My guess is it would still be under a minute…

Back in the CIM era we used to do this on our practice robots to extend runtime. Anecdotally, it significantly reduced running temperature and allowed us to practice nearly indefinitely. 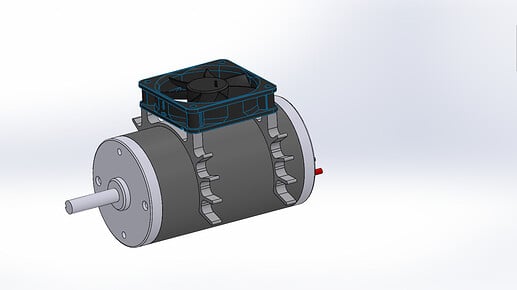 Here’s another snip from the VEX site that hints at why cooling is different between a̶ ̶N̶E̶O̶ and a NEO550:

Air through the motor helps with both of these configurations, but the thermal mass of the case, and it’s ability to conduct heat away to be dissipated outside the motor, differ between the two.

Makes me wonder on a neo550 which is a higher rpm motor why the end of the motor doesn’t have vents with internal fins to create air flow for cooling when it spins.

Was it an off-the-shelf motor?

I thought both NEOs are Outrunners.

You don’t have to buy as many motors and controllers if you use brushed components that you already have. For some mechanisms, such collector rollers, it’s pretty hard to complain about the performance of a brushed motor.