Makes me wonder on a neo550 which is a higher rpm motor why the end of the motor doesn’t have vents with internal fins to create air flow for cooling when it spins.

Was it an off-the-shelf motor?

I thought both NEOs are Outrunners.

You don’t have to buy as many motors and controllers if you use brushed components that you already have. For some mechanisms, such collector rollers, it’s pretty hard to complain about the performance of a brushed motor.

NEO’s are outrunners and same for Falcon 500. There is just an added case on the outside to seal it. Would be interesting to see an outrunner version of the NEO that would be a bit smaller.

I don’t have one to examine just now, but I suspect it at least derives from an off-the-shelf motor.

This is really key to designing a NEO550 mechanism. Similar motor curves are useful for designing with any motor, but NEO550 is comparatively easy to smoke (some brushed motors shared this, really only comparing to other brushless motors…). 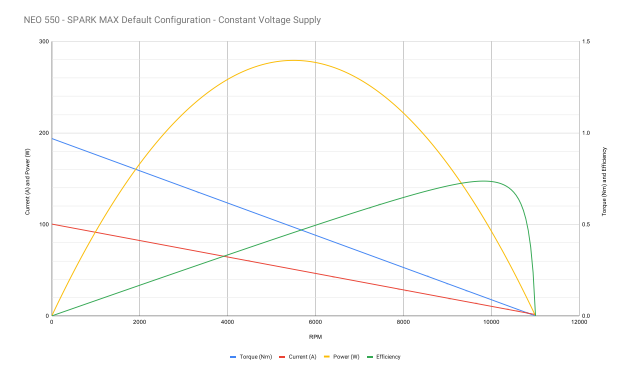 You really only want to run these motors so they operate on the right-hand half of this curve – really, the torque should only involve the part of the curve below 40A or so.

Your examples are all with zero forced cooling (only natural circulation). I’m saying adding forced air cooling will significantly extend the time to failure. Let’s take a better example:

The 775 pro is about 50% efficient at its max power point, meaning an amount equaling its 350 W mechanical output is being lost to heat when it is running flat out. It can do that indefinitely because the built-in fan is removing 350W of waste heat (and probably using a good chunk of that power itself in the process).

Now imagine the 775 pro fan ran on a separate motor, instead of on the same shaft as the main motor. When this theoretical fan runs you could keep it pumping out the full 350W of input power (as heat) while the 775 pro was completely stalled.

In the end, active motor cooling might not make more sense than just dropping the current limit and adding more motors, but I think there’s merit to the idea.

For anyone curious discussing the outrunner subject of NEO’s here are some photos of a busted one I have. Falcons are assembled differently but are still an outrunner style. If I had to guess the case on the back may cause less air circulation. 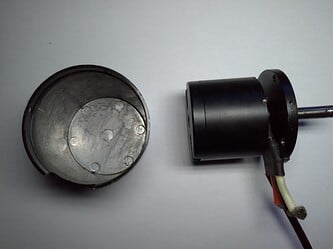 The second and third image shows the outrunner taken off. The outrunner has the magnets on it and the output shaft while the base part has the electromagnets, encoder and bearings. 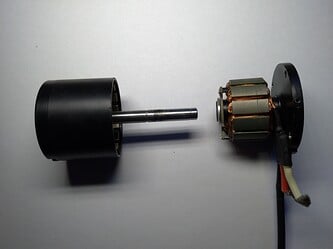 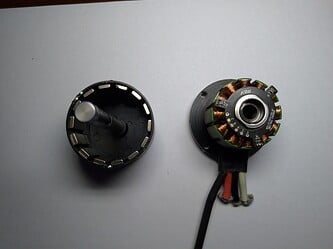 The fourth and fifth photos show the diameter of the case and motor. with the case a NEO is 60mm in diameter while without the case it would be around 50mm diameter 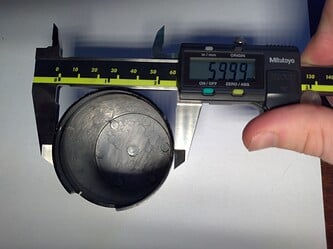 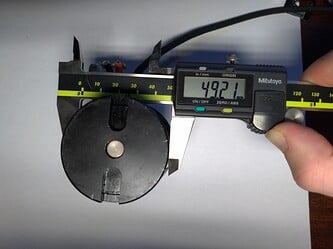 Edit: some helpful advice. Make sure your students understand not to use screws that would be too long. Screws that are too long may press on parts of the motor which can damage and stall the motor hence why this one is broken. It has multiple screw marks inside which stalled it. This goes for any motor not just NEO’s or BLDC motors.

From experience, it does work but not for long. The issue is that the case actually holds the motor leads down. If you take the case off, you need to fasten down the leads some other way (zip tie), or they’ll find their way into the spinning rotor.

This discussion on cooling and current limiting actually makes me wonder why FRC brushless motor controllers for NEOs and Falcons don’t natively support THERMAL limiting, especially considering they all have integrated temperature sensors (I think?). If you know your motor fries at 100C, why not have a feature in the controller that limits it to like 95C? At the very least it could help prevent permanent damage to the motor, even if it turns off a mechanism during a match/test.

Granted, you could probably implement this in code to some extent, but it seems like something that should be simple to do at the controller level.

If this was the only reason to consider vs. all the advantages of 775, I’d still use brushless over the 775s. This has burned us in many situations over the years, including FP, etc. I cant see teams using them at all moving forward.

I’m not blind to this, because goodness knows 1293 lived back of the curve out of cheapskatery for many years. (Heck, we ran OG Talons in 2019 and 6-Mini-CIM drive in 3CIM4U gearboxes in 2020. Would’ve run it in 2021 as well if we hadn’t gotten some outside help.)

But now that SPARK MAX has been in the Kickoff kit for two years (rookies got them in 2021), I don’t think that holds weight anymore. Prices may have changed since, but I ran the numbers shortly before Kickoff this year as part of a presentation. For 200+ watts spinning at 1000ish RPM, a reasonable figure for an intake or conveyor:

And that’s before we discuss how current limiting on the SPARK MAX has saved us multiple motors, which saves money and significant amounts of labor.

Would I give a cash-strapped team RedLines and Sports and brushed controllers? Sure. Would I tell them in no uncertain terms it’s a generation behind the state of the art, what the limitations of the setup are, and to budget for brushless in the coming year? Absolutely. The game evolves, and to ignore that evolution willingly off of small sums of money (relative to a five-figure operating budget) is foolish.

SPARK MAX has been in the Kickoff kit for two years

Yeah, and thanks (partially) to that, we switched our drivetrain from CIMs to Neos and ran our shooter off Neos this past season. But, our intake and feeding mechanism were 775s, Talons and VersaPlanetaries we acquired in previous seasons. There just wasn’t any good engineering reason to go to the current generation. By your numbers, that’s a $500 savings. Not insignificant and let us make other choices.

That’s great that you’re budget concious. But I don’t think anyone is suggesting throwing out your old stuff just to change for change’s sake.

We shifted to brushless for power (drivetrain) and the integral encoders on other mechanisms. Indeed, several years later (we were a falcon beta test team) we are still in the process of changing over as we retire components and find funds to buy more falcons.

My team is keeping all of our old (mostly fresh) 775 style motors and CTRE controllers so that we have access to them for fun or educational non-FRC projects. We purchased Hero boards from CTRE and will use them rather than RoboRios for such projects.

On competition robots, however, I don’t think we will be using them anymore. We have enough stock of brushless stuff now to make them the practical choice for the foreseeable future.

We used 775s to prototype a shooter, but we ended up using falcons for the actual shooter, we did use 775s for the feeding wheels, but I’m not sure why and we could have probably used Neos for that also. We are transitioning to falcons and we ordered 10 falcons for a swerve drive and other mechanisms for next year. We like the falcons internal pid controller and the increased power over neos and 775s. And we will probably use them for a few mechanisms next season. It is unlikely that we will use 775s or other brushed motors in the future.

We used a couple 775pros this past season because we have a bunch of them + versaplanetaries laying around, and we wanted to use them up if we could & decided they’d be fine on a low torque ball conveyor, and they were. That said, as most have indicated, we’re shifting to brushless (& max or ultra-planetaries).

I would love a waterproof, watercooled case (or a case with a heat exchanger to a small fan).

Bolt to a fat enough metal plate and you’ll be fine–the heat is all in the nose of the motor near the output shaft. Our Championship drive setup was six NEOs with the Thrifty Bot 6-motor conversion kit that Ryan sent us. We were heavier and drove harder there than at Electric City, and our motors barely got warm. Ditto this weekend at SCRAP where we played 12 matches in the span of about eight hours.

For practice, we did use our favorite USB clip-on fans (like these, but it’s a generic design from a bunch of Amazon sellers) blowing on our practice chassis’ 4-NEO (and aggressively-geared Toughbox Mini) setup to help keep it in check for these longer runs. A conveniently-placed bracket let us leave them clipped on while driving.