I tried posting this in User Announcements, but it hasn’t been approved, and this information is time-sensitive. I apologize in advance for the double post if and when the other is approved.

Anyway, those of you going to MARC know that it’s one of the largest off-season events in the upper mid-west. This year, there will be a few changes.

Game Changes (or not)
First off, to any of you that have heard that we are changing the game for this event: the game will be remaining the same. The original plan was to rework the seeding system, but limitations in the scoring system have led us to revert to the official game plan.

A/V
Secondly, the audio/visual system has been expanded. This year, we will be sporting two cameras (provided we have enough cable) as well as a graphics computer to provide videos between events. We planned on showing the animations of the participants, but we have not received any submissions. Those of you going to MARC: PLEASE email your animations to brandon.dusseau@gmail.com or ketron@monroe.k12.mi.us, or at least send a link to where we can download it. Also, if anyone can shoot us a link to this year’s FIRST intro animation that they show at the beginning of events, that’d be great (the one with the volcano).

In addition to those changes, we will have a live webcast of our event for the full duration, provided nothing breaks on us. The most direct link is http://ustream.tv/channel/marc-2010.

MARCStats
Also, this year we are running the official beta test of my MARCStats system, to be rebranded FIRSTStats after the MARC. This year I actually know how the game works, so it actually scores correctly for once. This system will be in beta for both events at which it will be used. If it doesn’t go well, it might be in beta forever. The system will have a temporary feedback feature that links to a survey, so anyone using the system can tell me how it goes.

After the beta test, I plan on cleaning up the code and releasing it under a GNU public license as open-source software, available for use by any team that wants it. Keep in mind, though, that the software probably won’t be functioning at 100% until next season.

Pricing and Events
Remember that the pig roast social will be costing $3 per ticket at the event, so if you didn’t preorder, you’re outta luck for the reduced price. Also remember that we will be having a silent auction to benefit the tornado victims of our area. If you can, please bring in items to auction off.

I think that about does it. I may or may not update this thread, depending on whether it’s necessary. The MARC 2010 portal is at http://ipirates1528.com/marc. We’ll see you there!

Is there an event schedule? I have gone through all my emails and looked here but have only found start and end times. I also found one place that said 1pm friday start and another said 3pm start.

We are really looking forward to this event but don’t want to be late.

Sure… lemme just grab it from our forum… here it is! 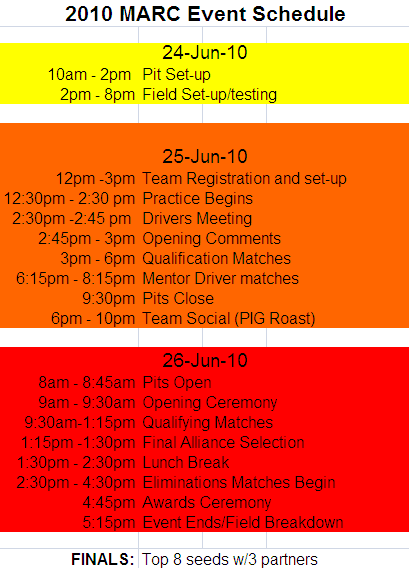 That’s the opening vid. I know it’s youtube, but it seems to be high quality and it’s from the FIRST account

Thanks a bunch. I’ll download it tomorrow… also… it looks like I may have to disable MARCStats for IE users, because it’s a total mess in IE…