Hey! How well would those engineers drive the robots anyway???

a NEW - THIS YEAR event at the Sweet Repeat in Oct:

The "You Think You Can Do It Better???"
All Engineer Tournament will be limited to the first 12 registered teams who sign up for this event.
Register early.

Sue… you’re gonna get your field torn up!

that i would really like to see… make sure someone who goes get video of it and post it up. probably will be very entertaining

I’m not sure about this because it could turn out great.

When presenting a demo to the president of BorgWarner a few days before ship, we let him drive around and stack.

Amazingly, to the jaw-dropping of our drive team including me, he lined up with every bin pretty much perfectly except for 1 or 2 and in a shorter time than we allotted for our driver tryouts, he had them all stacked.

He was around 100x better than anyone at driver tryouts and would’ve made a great driver with more practice. Perhaps this event will turn out to be one of the greatest driving exhibitions.

Some of us have been driving these robots for a few years now in actual competition. You “old guys” don’t stand a chance!

we let one of our adult mentors drive our 2000 robot, and they arent allowed to drive anymore

I and another Team 48 engineer were asked to drive our old robots to serve as simulated competition for our new bot during preseason driver practice. It was apparent to all who were in attendance that the “old” guys (old meaning 26), driving a less maneuverable bot with a dying battery, drove circles around all of our prospective student drivers who were piloting xtremachen6. Crafty engineers rock! To their credit, our final student drive team did a great job during the regular season. It sure would be fun to see how the mentors do driving in a postseason competition. One caveat - 45 year old geezers serving as human players might be a painful thing to watch (the words “slipped disc” and “pulled hamstring” come to mind). Teams might want to consider using their young-ish “college”-type engineers for that task.

What I’d like to see is a timed obstacle course set up on the field at one of these events where engineers and their “inferior” student driver buddies get a chance to compete directly against each other. It would also be entertaining to watch those teams who build duplicate bots pit their student drive team against their engineers during the same match. I wonder if there would be anything left of their robots after such a battle.

Which brings to mind this question - which of these two bots would win if they were paired against each other during a match - the sturdy and powerful Mighty Auk…or the fast and insanely maneuverable Mighty Mouse? Which one would the TechnoKat students prefer to drive, and which one would the engineers select? Hmm…

Last year I surprised my team by being able to drive our robot pretty well, once I was finally allowed to touch the controls, after the season was over. I blamed it on a misspent youth… building and flying RC sailplanes.

After three dimensions, two was easy. Especially since I didn’t have to worry about maintaining altitude to reach the landing zone. I was also able to figure out the source of some manuverability issues just by driving it. That robot had a tendency to “depart controlled flight” if you let it turn too much at speed.

As a result, this year we relaxed our “no engineers on the controls” rule a little bit. Engineers were allowed to drive occasionally, for diagnostic purposes only. I think that was about three times.

I’d love to see an Engineers Only event at the Southern California Classic next fall, but we may have too many teams to accomodate it. We still don’t have a date, but it will be either the week before or after the Cal games.

Age and Craft can beat Youth and Quickness

*Originally posted by “Big Mike” *
**we let one of our adult mentors drive our 2000 robot, and they arent allowed to drive anymore 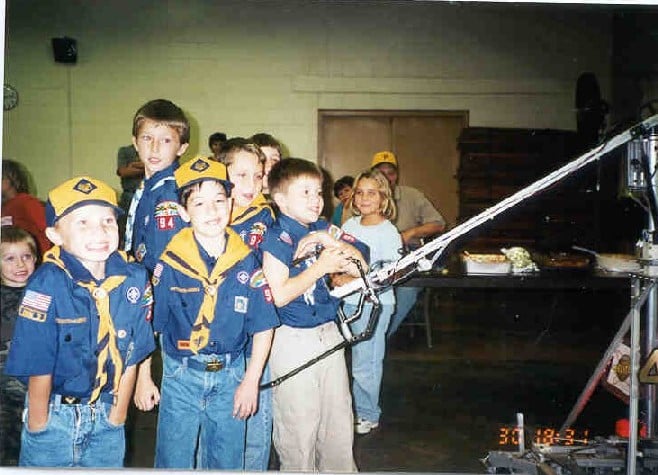 The Ford SWAT Team will be at Sweet Repeat IV

“Helping To Keep Your Robot In The Competition…
even after your adult mentor/engineer has smashed it up.”

Quick, someone get a stretcher!!!:yikes: