1114 2015 was already brought up, but theres a couple even older implementations before then, such as 1425 a year prior.

And it bit them when they found themselves stuffed into a goal. Triangular robot, triangular goal.

Kiwis drive in FRC has been a thing since the early 2000s.

That is the most beautiful FRC robot ever. It looks like an alien star cruiser that would be in Star Trek. 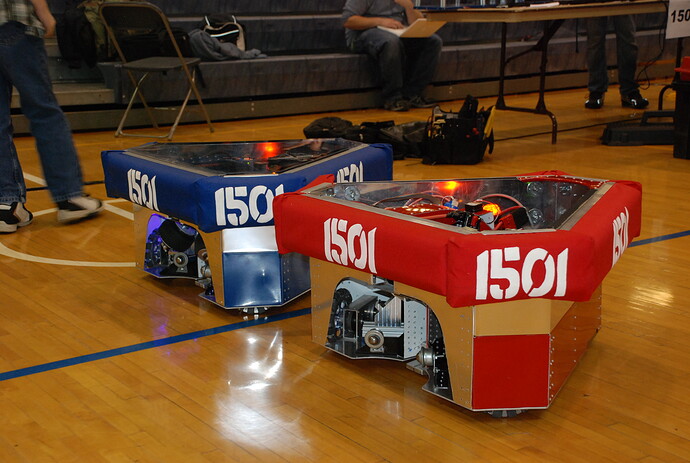 Their solution to a controller was interesting - just link 3 sticks together and feed the joystick value into the motor.

We were 857 the year we debuted the first three wheeled Killough Platform. We dubbed it Kiwi Drive because we didn’t want anyone to know about it. Unfortunately the robot wasn’t that great…but the drivetrain technology was very cool! We built this prototype in 2002 Before we figured out how to build decent Omni-wheels we copied the original Killough Platform…it had two spherical wheels 90-degrees out of phase. Second prototype Then we built a functional prototype with Omni-wheels of our o…

Oh good. We’ve had this exact conversation before.

1318s 2008 Robot remains my personal favorite. “The pirate ship” as I heard it referred to. I believe 2 swerve modules and 4 caster drivetrain. 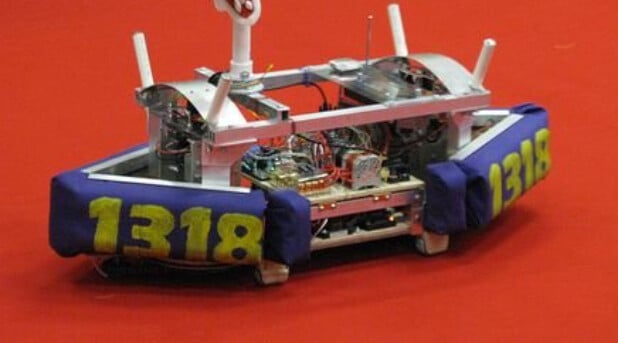 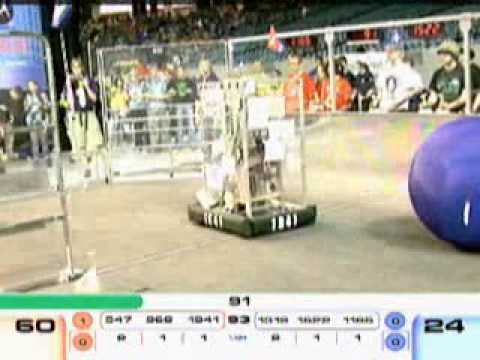 We (3128) did a circular frame in 2014. It seems like a very smart strategic choice, and in years with very prevalent and aggressive defence (2022)and would be interesting to see how teams would react to such a frame, especially since there is no corner to hit when playing defence against a team without a turret and with a circular frame.
I couldn’t find any great photos/videos, but this one is alright: FRC San Diego Regional 2014 Quarter 3-2 - YouTube

Yeah nonagons are very cool and have a 100% World Championship win rate!

If you look closely at Viper, you’ll see the hexagon bump outs. It was actually kind of hard to see until up close. Renegade is actually easier to make out. The Robowranglers will sometimes do off-season design projects. The history of these projects can be found in a previous blog post: The Robowrangler “X000” Projects . One of the most influential designs was done during the off-season before the 2015...

In 2014 we made an octagonal frame 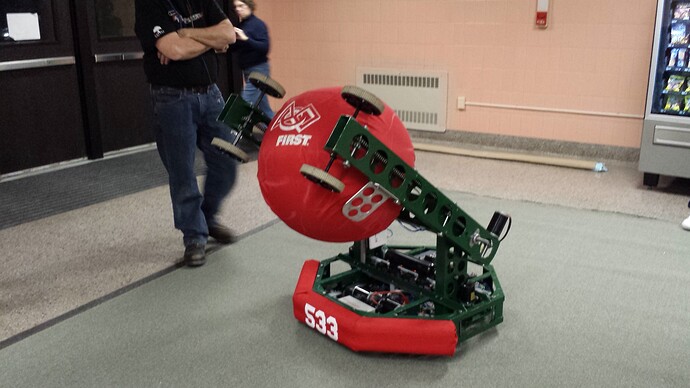 Back in 2013, 948 had a slightly trapezoidal frame that allowed it to nestle nicely up against the human player station for cross-court shots

840 had a hexagonal drivetrain this year, worked pretty decently for defensive purposes. Bumpers were a pain tho.

2014 robot. Turns out it is really difficult to make a legal bumper for it. Had to go to some fly by night start up company to get the plywood. 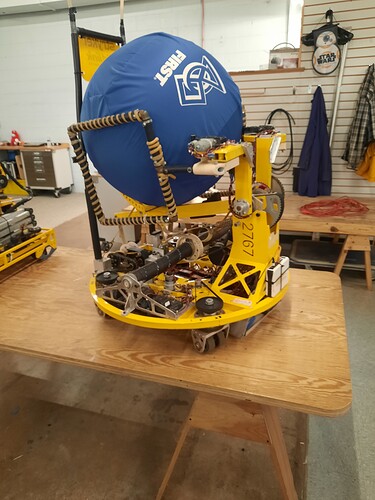 Pics or it didn’t happen.

I’d be very surprised if this was the case and I didn’t know about it.

I do not have pictures handy from 1999. But I did scrape up emails from multiple coaches from during that time confirming it: 3x 120deg Omni wheels with gyro feedback. Wheels were made from aluminum at a sponsor from student designs.

I sent out a ping for additional information, but it was 23 years ago, so don’t hold your breath. I can’t find match videos or anything from that time.

To be clear: email is from 2011 discussing our 1999 robot Mac. Dodd was the head technical coach at that time. I was not a student at the time, but I did drive the robot at a demo night.

If this did happen I can say with some certainty that we didn’t know about it when we started doing our initial prototypes in the summer of 2000.

I’m sure a vast majority of people never knew about it. 95 was never a historically-recognized team and didn’t share much, or any, media on CD/the internet until 2011ish.

For what it is worth to anyone here on CD I give my word that our 1999 competition robot used 3x omni wheel drive. Pretty sure @Andy_A would also vouch as he used to have one of the old wheels.