Recently I’ve been looking into standardizing our electrical and pneumatic systems in preparation for the 2021 FRC season, and most notably have come across the Thomas 215 compressor as a possible alternative for our current compressor, the standard Andymark Viar 90C.

Hey all, I’m assuming I’m wrong but I was checking the spec sheet of the VIAIR 90C and it seems to only be rated for 120 PSI, which is below that required 125 PSI for R82. Was there an exception or am I misreading something? As far as I know this has been the default compressor since 2011 and the minimum 125 PSI rule has been there just as long, common sense says that FIRST wouldn’t give rookies illegal hardware.

My team is trying to look away from the small compressor. The am-2005 on andy mark. We have gone through 2 of them last year and 1 in the previous year. We don’t want to go to the bigger compressor that has been with first due to the weight of it. Are there other legal compressors we can use? Or is it any compressor as long as it doesnt go over the cfm?

Somehow I managed to misplace all my links of where to get the large tan Thomas compressor that is used in FIRST. We tried the little Viair compressor and it just isn’t enough. Can someone get me the part/model number and where to purchase the larger one?

What air compressor did your team use this year? Given the increase in the allowable air compressor CFM rating to 1.1, I am wondering what new legal compressors teams have found.

Anyone can confirm what the weight difference is between the compressor Andy Mark sells and the Thomas ones ? Also, is there a materially different output rate between the two. I’m also slightly concerned the AM might overheat given its reduced heatsinking and a 10% duty cycle rating.

…and a few others,

certain other members of our team have expressed interest in the possibility of testing and possibly using the Thomas as an alternative to the Viair during and possibly after the 2021 season.

However, certain mentors on our team have expressed worry at the possible illegality of the compressor, as well as its overall competitive benefits over our current Viair.

His concerns are quoted as follows:

IIRC, the Thomas is the old KOP compressor. Tank, heavy, not great CFM under load as I recall but very durable.

In 2018 we tested all the compressors (AM, Viair, and Thomas) in how many times we could actuate a cylinder over a match time in the test system. I think the Thomas compressor was a maybe 10% improvement over the others in that test.

But the main reason we went with it is because is can run continuously while the others are something like 15% duty cycle. We were refilling a 2.5 gal tank between matches which took about 6 minutes. So we could use the extra duty cycle, especially on short turn around times.

It is, of course, quite a bit heavier. But if you need lots of air it is better than the other two above I think.

I didn’t have the newer compressor to test, so that could be another option: NEW Compressor for 2020!

The Thomas 215 is different from the old KOP compressor – we’ve used it since 2014 after reading on Chief that 254 used it. It’s been pretty smooth sailing since we switched.

From our testing, it gets to 120 faster than the old Thomas compressor and can take a fair amount of abuse before it needs to be retired, but like other smaller compressors will heat up quicker. We haven’t benchmarked it vs. the Viair 90C.

While I don’t have any advice on this topic, there are some calculators that may be of use to you. @AriMB has a pneumatics refill calculator here. I have also implemented a very early alpha web version of a similar calculator here, with support for the VIAIR 90C, 98C, 100C, as well as the Thomas 215 and AM 1.1 Pump. You can view system pressure over time starting at 115 PSI and it will attempt to model the system pressure as cylinders are actuated, factoring in dynamic CFM rates as well as when the compressor turns on/off in the FRC ecosystem.

696 has been using the Thomas 215 since at least 2016. It works well. It does still get plenty hot, but I’d say it’s not as worrisome as when the Viar gets super hot. We had one robot with a substantial leak, and the compressor ran basically continuously for quite some time. We’ve never had an issue with the Thomas 215 compressor, though I will say we typically haven’t used the same one year to year.

Sorry to revive this thread, but does anyone have a reliable source for 215’s? I’ve found a couple of suppliers, but for lack of a better word, they all seem kind of sketchy:

RideTech is not a sketchy supplier at all, I have purchased directly through them and also via their store on eBay. The 215 is an excellent compressor and the one I recommend to the teams I’ve have worked with (or anyone who has asked) for a light weight, really durable compressor.

Additionally, I always recommend that teams run the compressor off of a spike/relay and not via the PCM, we spent a whole season solving problems related to a compressor popping a fuse due to current draw on start up. Call me old school, but better safe than sorry. Perhaps the new control system will see improvements in this area.

We bought the Thomas 215 because we have a knack for placing the compressor on the side. 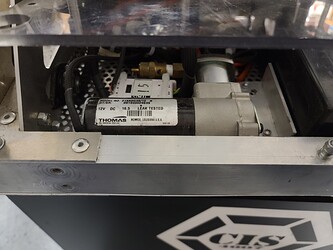 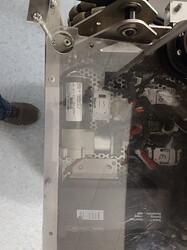 Out of interest, is there a reason why CFPCO sells theirs for so much more than RideTech’s? Right now RideTech seems like the better option, but we value performance over cost, especially with smaller purchases like this one.

But for a more serious, in-depth look at why the one offered by CFPO is inherently better (and thus, more expensive) over the RideTech 215 is this.

From what I read it is built with better components and the ‘Wobble’ component allows this compressor to operate in many situations as well in any position.

Can anyone further this - or discredit it?

They are both the same Thomas part number 215ADC 38/12 so no, there is no reason to spend the extra money that CFPO is charging over what Ride Tech is charging.

We use the lighter Viair with a cooling fan. No issues with this approach since 2014 for us. The fan seems to effectively increase the Viair’s duty cycle to near 100%.

Just another anecdote to muddy the waters.

Having to use a fan for extra cooling is probably a dealbreaker for us quite honestly, considering the added complexity and cost. The half-pound is pretty worth the better duty cycle of the Thomas in my opinion.

Is adding a fan really that complex? We’ve been doing the same for years and have never run into an issue. A simple bracket to mount the fan and then wired into an easy 12v source so it runs constantly if needed and the compressor stays nice and cool. A little fan goes a long way, but we have found sizing air storage properly so the compressor only runs for 10-15 seconds works even better.

edit:. Plus fans have been in the KOP for years and years so they are free.

1-2 victor fans directly wired to the PDP and 3-4 zip ties is all it takes. 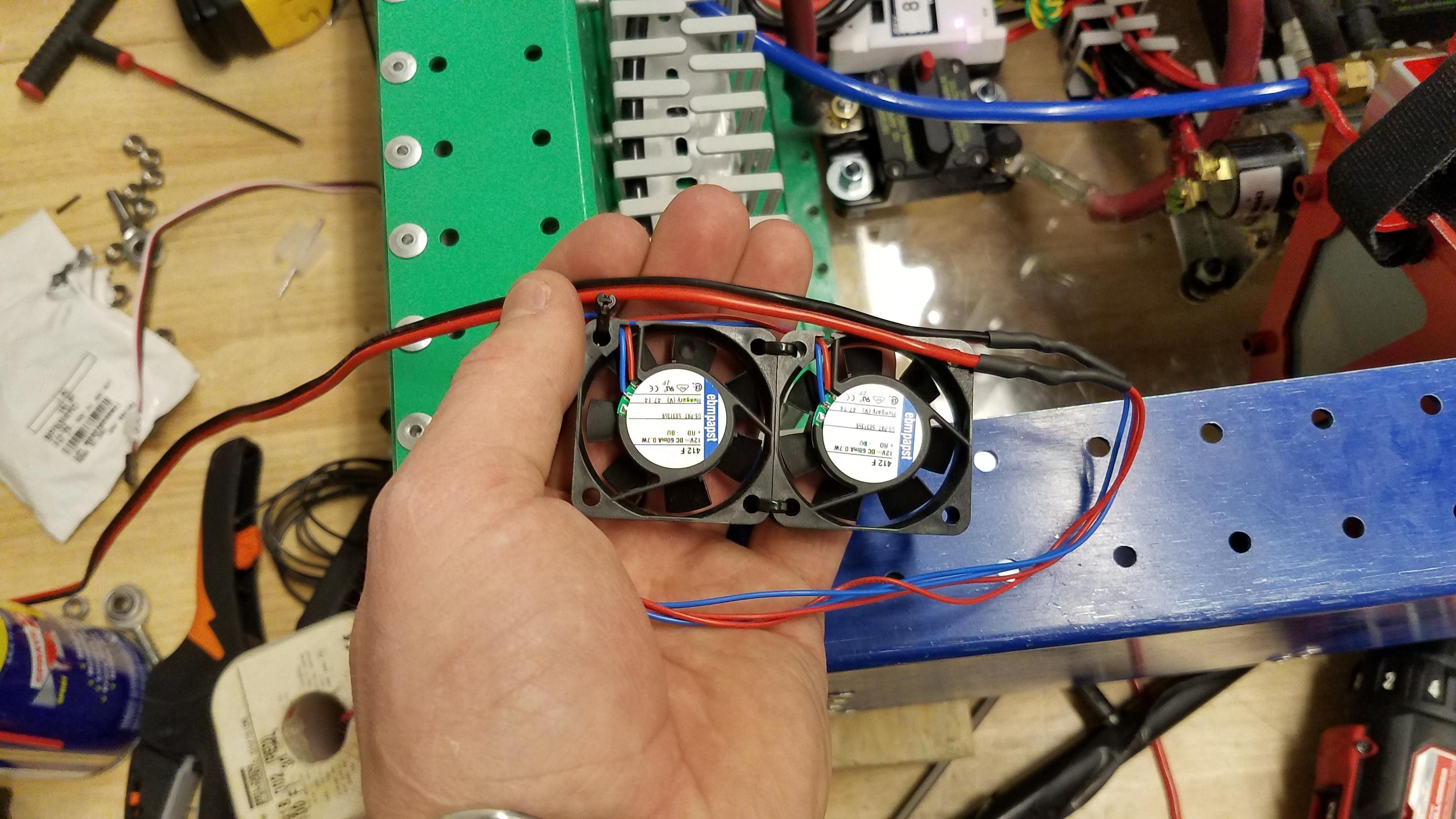 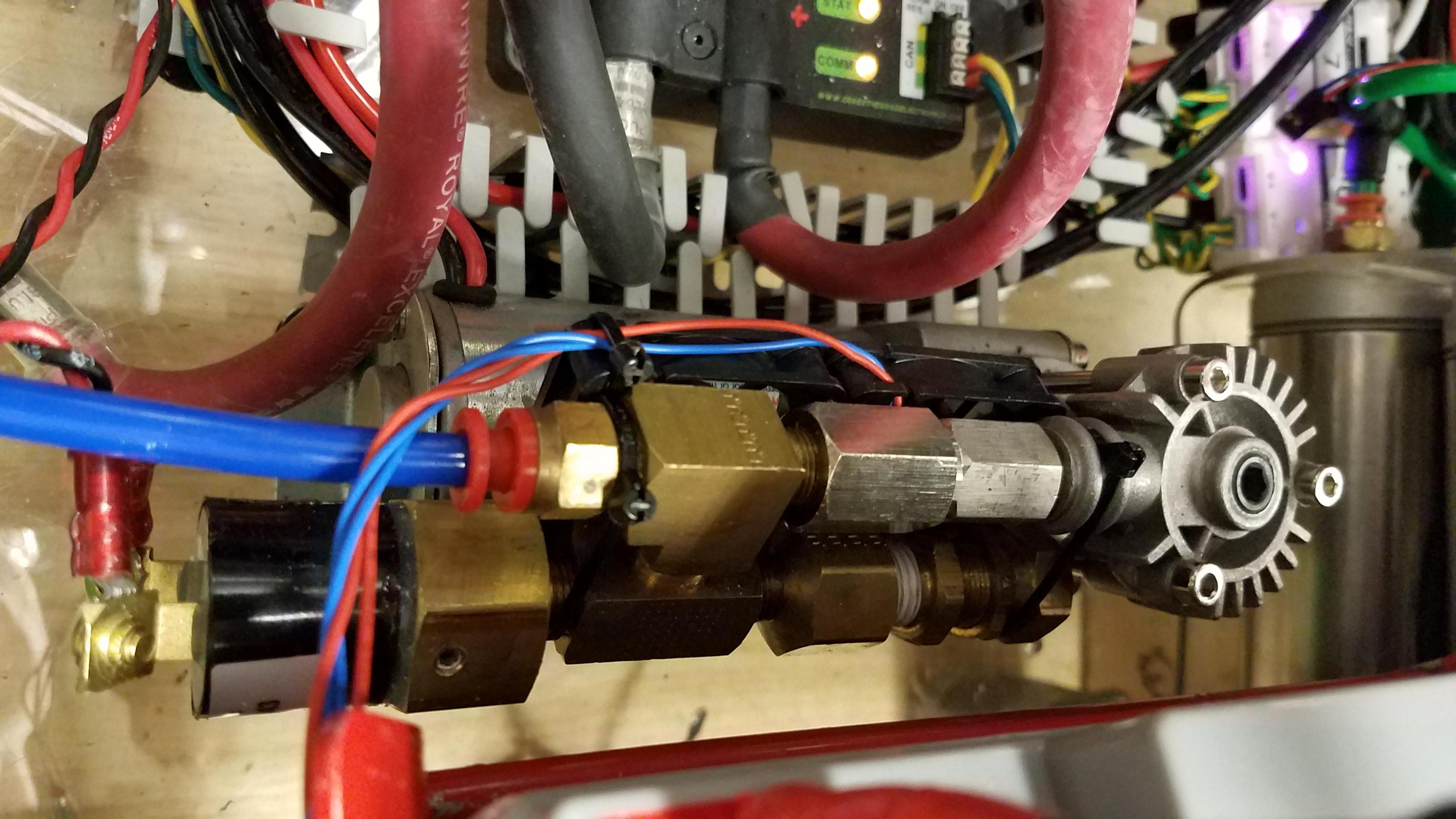 While adding a fan by itself might not be that complex in actual implementation, introducing anything new to a system fundamentally adds to the complexity of said system. When we compare the benefits for overall effectiveness that saving a little under half a pound on a Thomas gives us, to the benefits of not running added components with all of the risks and support required (even if said risks and any necessary support is minimal) a team of our resource capacity can safely conclude that it’s likely more worth it to switch to using a Thomas to achieve better compressor duty cycles, rather than outfit our Viair with some fans. Just my two cents. Weight and cost just aren’t as notable concerns for us, especially compared to simplicity and robustness, although it is nice to have this option. Thanks!