For the last month or so I’ve started making some videos on design for FRC and modeling in Onshape and posting them on YouTube.

A few notes on what these aren’t:

What they are is a set of videos focusing on design and modeling concepts beyond basic tutorials that I’ve found useful, that I either don’t see a ton of information on around or don’t see information that I would have wanted to see for doing it in Onshape specifically. Right now I’ve made five videos, that are loosely organized by title.

I’ve been sharing these around the FRC Discord, which has provided some great feedback and ideas for future videos (thanks Kim, JJ, and anyone who watched and gave feedback there!). I figure now is as good a time as any to post them here.

Definitely still looking for feedback and ideas for future videos. I am not a mechanical engineer, and my day-job is very far from actual CAD and design, despite my username, so I’m always learning on this stuff.

Hope people here can find some of these useful, and I’ll be posting future videos in this thread as well!

I don’t have anything to add, but I wanted to say I really like the tube bumper mount/handrail. Pretty dope.

Thanks! Stole that from a design @Knufire had a while back. Really I can credit him in general for my love of tube-nut standoffs.

Looking at it, you seem to be right. I mostly think about the 3D printed supports and the cotter pin attachment with their 2019 robot bumpers, but they do use tube spacers in shorts segments at the front and back. The first time I saw the full width type design was probably around August last year in some proof of concept designs Rahul had. 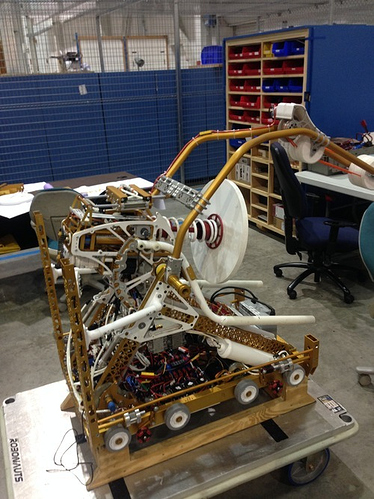 I believe the first year we did the bumper support tube was 2016, and I wouldn’t be surprised if we got the idea from 118. 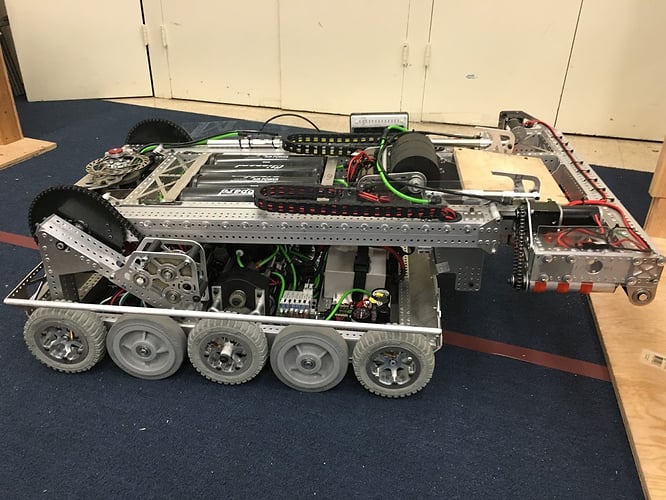 In 2016, the bumper rules allowed for (and the defenses basically required) that bumpers were quite high off the ground. In 2020, though, teams were saying that lower bumpers make it less likely that the robot will get up onto power cells. With this style of bumper support, don’t you need the bumpers to be more than 2" off of the ground if you’re using 6" wheels? If so, was that fine (in terms of getting on top of power cells) for teams who did this in 2020? 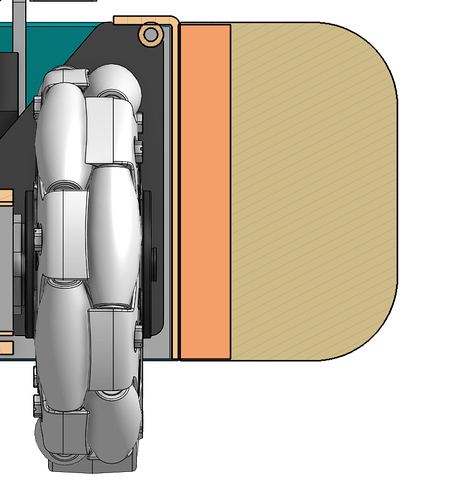 This is how we did our 2020 setup. we started with 2" and later switched to 1.5" ground clearance by moving the wood lower on our sheet metal bumper frame. I’m guessing you can do something similar with angle bracket, there is nothing stopping you from having mounting hardware higher than the top plane of your bumpers.

This is pretty close to what our bumpers looked like. Wasn’t an issue for us.

Great series! I learned several new skills and tips that I will definitely add to my own design practice and lessons. Thanks for posting these great videos - I would love to see more!

Just finished a set of videos on designing an intake for the 2020 FRC game, using some concepts from the linkages videos I posted earlier.

Let me know what you think-- there ended up being a bit more than I expected to these (intakes are a complex subject, after all), and I think in the future I’ll target stuff that ends up shorter.

Really the most important videos here are probably the first two-- the last three are kind of getting into the weeds of all the nitty gritty modeling stuff of taking a core design to something that entirely works.

Just posted a follow-up that focuses solely on the design features of the intake designed in the above videos.

It’s pretty light on modeling but boils out some of the more specific design considerations I have for an intake from the above videos into something that’s probably a bit more digestable, and avoids getting into the weeds of all the specific Onshape modeling bits.

In this intake part studio, why are you deriving the parts and making them look fake/for reference? Seems like creating the part studio in-context of the main assembly would accomplish the same thing a little less wonkily and handle the way youve made it clear theyre for reference automatically. Am I missing something?

I have a general dislike of in-context designs, mostly from memories of broken and circular references from my Creo days. This probably would have been a good place for it, if in-context didn’t give me a nasty feeling.

I wouldn’t say the way I’m doing it is necessarily the best way, and I’m definitely gradually talking myself out of the aversions Creo gave me.

In reviewing CAD from others that have asked for my feedback, I also see a considerable amount of what I would consider overuse of in-context, even considering my aversion. In general I do believe in being very intentional about references being created across part studios and assemblies. Even doing this how I did it makes me uncomfortable— I honestly would have preferred to do the intake entirely without context (via derived parts or in-context) from the rest of the document. In fact, if I wasn’t largely trying to show how the intake operates around those in the video, I probably would have done them entirely with an independent sketch, which has its own flaws around updating.

I would be really interested in hearing how much other people use in-context or similar tools in their design. I started learning CAD ~10 years ago with Pro/E-- a lot of my habits are picked up from things that Pro/E enforced on me. In my mind all this intake really needed was a sketch of the drivetrain and a point approximately where the hopper floor ended up. Biggest reason I used a bunch of derived parts was because it was a bit faster than making that sketch, at the potential risk of update-breakage, which is mitigate by that part studio being exclusively for the purposes of the video.

I might do another video on failure modes of derived parts and in-context to demonstrate some of the ways they can bite you.

I wouldn’t say the way I’m doing it is necessarily the best way, and I’m definitely gradually talking myself out of the aversions Creo gave me.

Having gone through several UI changes of Unigraphics, from UG7 to current NX I’ve seen how designers get stuck on a certain way to do something. It’s not because it’s necessarily the best/fastest but it is the way that the designer knows well, and knows that it will work.

The experienced designers that were there when I started many years ago didn’t like parametric modeling because they learned to use primitives to model. The designers that started with me didn’t like using sketch, mostly because sketching was poorly implemented in the beginning and they got locked into parametric modelling and were good/comfortable with their methods. I remember my wingman telling me about how he could make an injection molded bracket four different ways {primitives, parametric modeling, sketcher and even by designing the top and bottom halves of the mold). Nobody he asked could tell him how the best way to design the part was. And don’t get me started trying to take over someone else’s part. Let’s just say that sometimes it’s faster to start from scratch and design the part the way you know how rather than try to go through 200 modeling steps to try to figure out how the previous designer did it.

I still don’t use show/hide in NX because I’d rather use the keyboard shortcuts Ctrl B for hide and shift-ctrl-U for show. The “B” was from when the operation was called blank and the U was from unblank. I remember designers in the early dialog box version of UG shouting 3-1-1 for blank command, my thought process was always edit/blank/blank. But some overly smart person thought that designers would confuse blank-verb (to hide) with blank-noun (sheet metal) and changed how we used the function for 10+ years.

I might do another video on failure modes of derived parts and in-context to demonstrate some of the ways they can bite you.

Just watched through the video series and I have to say, great job! I’ve been CADing FRC robots for 8 years now and I still picked up a bunch of tricks from these videos. I started learning how to use Onshape a few months ago after starting with Solidworks, so this was also helpful to show some Onshape tricks I didn’t know about. My team hasn’t made the jump to Onshape yet (not for a lack of pushing on my part) but I’m going to suggest that they watch these anyway just for the design tricks.* Can’t wait to see what else you have in store.

Hey! I am a beginner to Onshape and I have been working on my first drive train (a custom six wheel crab drive with gear shifting) and the biggest problems I have been running into are the gears. Could you make a video which focuses on making specific parts in-depth like gear systems and things like that? Just a suggestion because I can’t seem to find many videos that are actually helpful about that. Thanks!

Are you looking for like, how to lay out a gearbox, how to calculate your ratios, or something else? I can definitely put something like that on my list to do later this week.

As a side note…

I don’t want to tell you how to live your life, but if you’re just learning you might want to try a progression of doing a single stage, then a shifter, then a swerve module, then a shifting swerve module. When I’m learning new skills I often find it’s useful to focus on one thing at a time, and especially if you’re just learning, the repetition in those will help you build muscle memory for the software. Are you new to Onshape in particular, or CAD in general?

When I’m learning new skills I often find it’s useful to focus on one thing at a time,

Yes absolutely! This is my main goal for CAD, but I am trying to split it off into bite sized chucks so I don’t get overwhelmed.

Are you new to Onshape in particular, or CAD in general?

This is my first time working with Onshape and the first time I have ever done any robotics CAD. I did a little before, so that gave me a head start, but that head start has completely run out and I am simply trying my best to figure things out now.

Are you looking for like, how to lay out a gearbox, how to calculate your ratios, or something else?

Yes, yes and yes. All of the above and more. Whichever you think would be more beneficial. I am the beginner here, so I will defer to your better judgement on which subject would be more useful.