While we never had an official build thread, I’ve posted things here and there and wanted to pull together some of our build season and overall improvements from event to event.

Speaking of improvement, here’s how my team did from week to week

We decided on the ever-so-popular Lego traversal climber. I started working on a design immediately. We also decided on a vertical pitching machine design with two inches of compression. The first competition-used iteration of our climber was definitely consistent, though we were wary of increasing the speeds too much given our little amount of practice.

Week 1
Before Kokomo in Week 1 we had no time for drive practice, and barely had time to get a two ball auto working. We scored a horrendously low number of cargo, but we traversed in all but two quals matches. We ranked 7th going into alliance selections, but we were eliminated in the quarter finals. 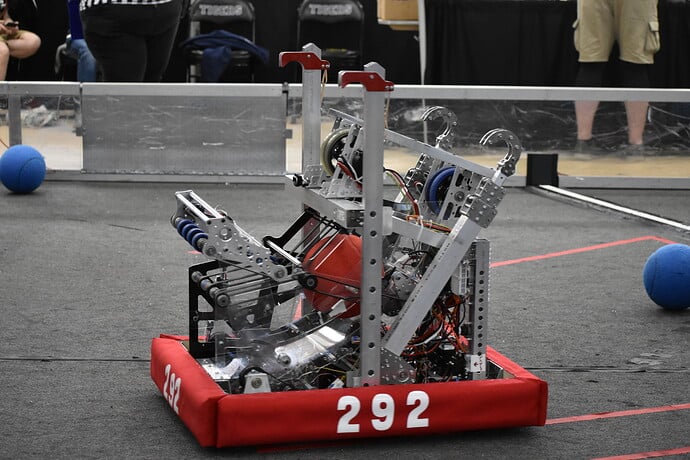 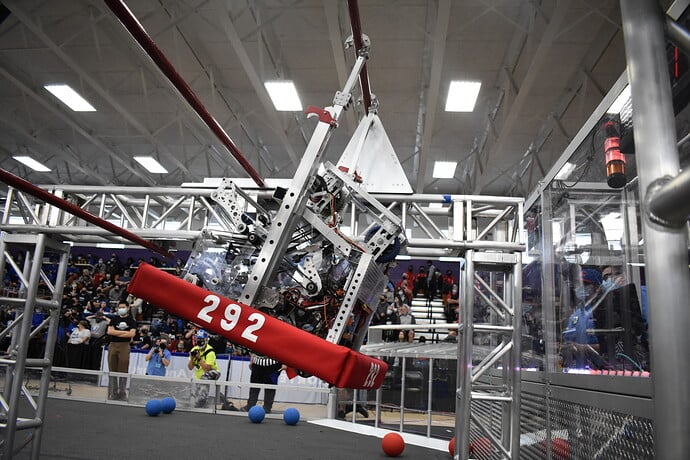 Before Tippecanoe, we first had to rebuild literally our entire robot because we fell and warped everything. Sick. This gave us a chance to improve on most of our designs. We improved the electrical mess we had originally and made it stronger with more bracing and gussets, to name a few things. 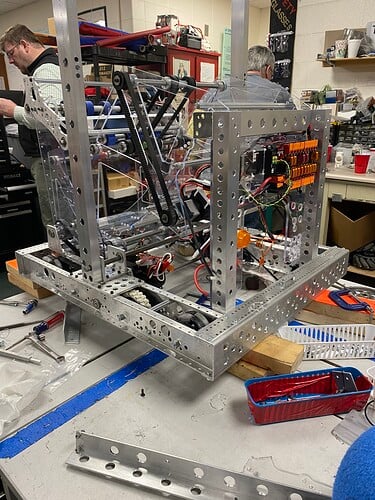 Our climbs also got much faster. We were running the winch motors at 60% power, but @Nick_Lawrence told us to send it and go full speed. When the Nick Lawrence tells you to send it, you send it. Going faster made our climbs smoother too.

Week 4
We had about a week and half of practice and testing going into Tippe. This was evident, and we ended up seeding fourth after our final three quals matches all being over 100 points. We picked 4272 and 1741 to round out our number three Alliance, and made a run to the semi finals. The further limitations of our robot began to show even more at this event. Our intake was slow and we lost a lot of pulleys. It also wasn’t full-width, so I had to hit cargo along walls straight on. At this point, I was still manually aligning to shoot as well, slowing our cycle times even more. 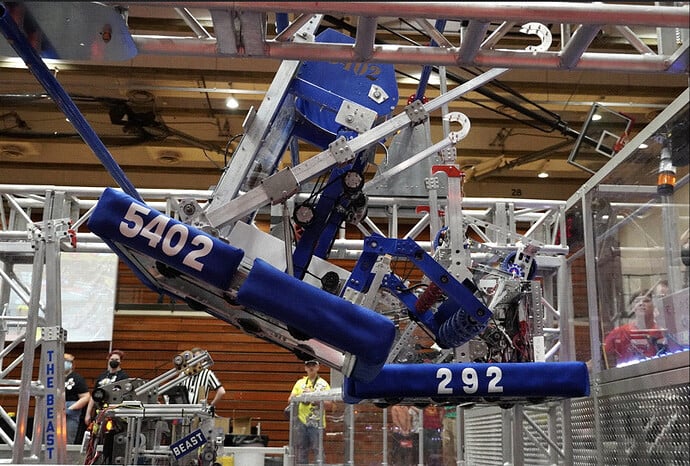 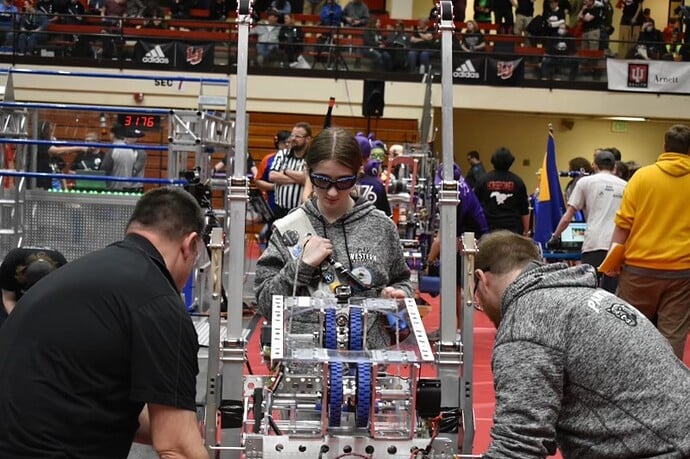 Going into state, we knew we had to bring our “A” game. We decided to switch to a pneumatically actuated, four bar intake, and also use cylinders to actuate our climb arms. Our new intake worked great, and so did the faster-moving climb arms. We had two full weeks of high quality practice, including practice with 3940, 45, 7457, 3176, and a handful of other teams during this time. We also got a four ball auto working, though it barely worked during state despite no software changes.

State Championship
What a freaking bloodbath. Our robot performed excitingly well, and we were the third highest ranked team by OPR, averaging 40.6 points per match with our best being 55. We got the state record of 130 with 4926 and 8116, and we attempted a triple traversal with 4926 and 829.
Notice I said “we attempted”… 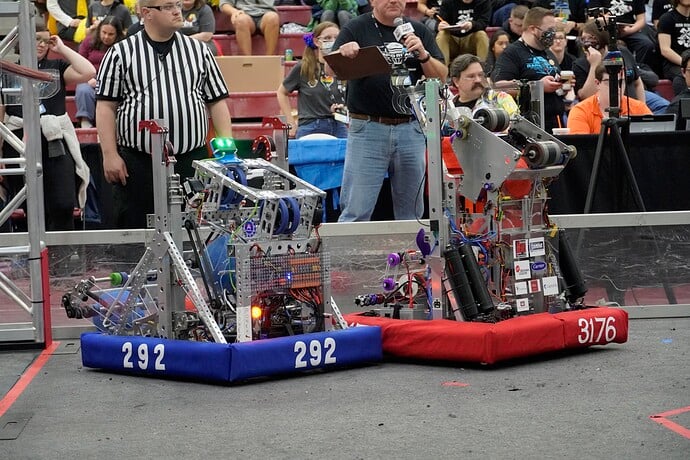 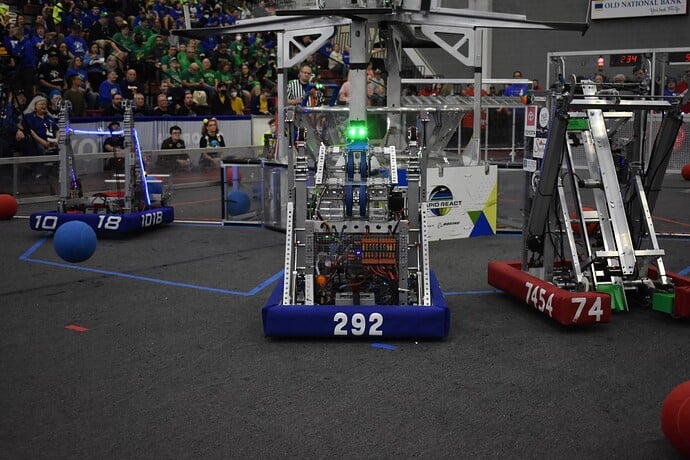 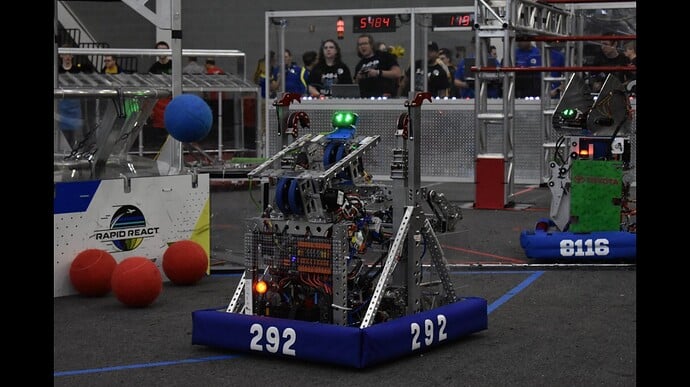 829 gave us their custom award for best climber: 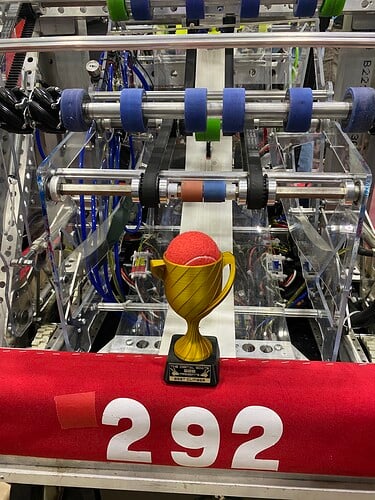 And we won the Autonomous Award because of our automated conveyor and shooter. In sum, our programmer has automated most of our responsibilities away, and we only have a few buttons to press while competing. There’s more to this and I’d love to explain it further if anyone asks.

That attempted triple traverse was so cool. We were going crazy up in the stands when it looked like we had pulled it off. Then we knocked you guys off and left us all thinking about what could have been.

We were so close, we could’ve had the state high score and first triple traversal together! We loved playing with you guys, good luck at Champs!

292 absolutely brought it this year. So proud of the growth your team has shown throughout the season, and I’m hoping you can capitalize on it moving forward.

Awesome year PantherTech! We loved playing with you every time and look forward to doing it again soon. The triple attempt was fun; I’m glad you weren’t damaged! Although it failed and there were ‘consequences,’ we all talked about it and agreed we should go for it. I wouldn’t change a thing. What a blast! 292 should be very proud of what they accomplished; please pass that along to all your students!

I’m definitely glad we went for it! We actually had more damage from when I tipped it over in match 35 than from the fall. Had we gotten it though, the three matches we had together this season would’ve totaled 348 points

I’m a senior and am going to college two hours away, so I’ll try to help carry this momentum into next season as much as I can before I can’t go to any more meetings.

And congratulations on an outstanding season of your own! One of the first things I did the first morning of competition was see if we had any matches together!