Another post is up talking about schedule strengths from 2005-2018.

Inspired by this thread: Would there be any reason, on your own volition, to intentionally fail to get an RP (or even throw a match)?

I decided to take another look at the hypothetical “serpentine valley” I investigated last year. Back then, I was more interested in if teams going into an event had an incentive to perform worse than their ability. I found that if there was a so-called serpentine valley, it was very small and centered around rank 10.

Here, I did a similar investigation using end of event rank instead of start of event Elo. A serpentine valley here might indicate that teams in matches near the end of the quals might be incentivized to get fewer RPs if they want to maximize their chances of winning the event. Here is a book with that data as well as a summary sheet: serpentine_valley_v2.xlsx (1.4 MB)

I pulled rankings and results from all events since 2008. Which gave me a sample size of about a thousand events. I found how many event wins and how many wildcards were achieved from each ranking position, and dividing those by the number of events where a team got this rank gives us a win and win/wildcard probability from each rank. Below are graphs summarizing that data: 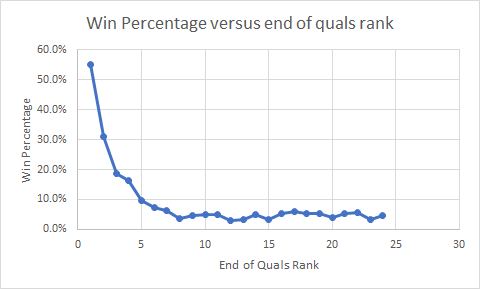 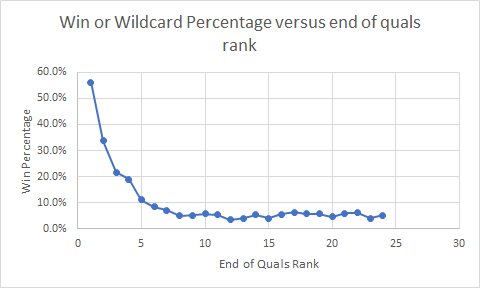 These graphs actually look remarkably similar to the pre-event Elo graphs from my earlier work. The “serpentine valley”, if it exists at all, is centered around rank 8 or 9. For reference, the gap between rank 8 (bottom of the valley) and 10 (top of the valley) is 1.1%, jumping from 3.8% to 4.9%, or about 12 out of 1000 events. This is much smaller than I probably would have expected, and that is the lowest point compared against the highest point. Comparing rank 7 or rank 9 to rank 10 is nearly identical. The “valley” that we are seeing could feasibly be largely noise, as there are larger “valleys” at ranks 15 and 23, and I have no reasonable explanation for why there would be dips around those ranks.

My takeaway is that this methodology really doesn’t provide evidence that any reasonable number of teams are incentivized to throw matches. That doesn’t mean those incentives don’t exist, just that you’d really have to dive much deeper into the data to prove that they actually do. Maybe someday when I add alliance selections into my event simulator I’ll revisit.

Fun fact, the lowest any team has ever ranked and still won the event was 62nd. Which happened twice, once at the 2015 LS Regional and once at the 2010 Michigan State Champs.

Caleb, since you have the data… Instead of win probability, what about probability of being on X alliance? I’m wondering if that would show any difference.

Here’s an updated book that includes alliance data, I limited the data set to 2014+ since earlier data gets iffy:
serpentine_valley_v3.xlsx (1.0 MB)

Probability of being on each alliance based on rank: 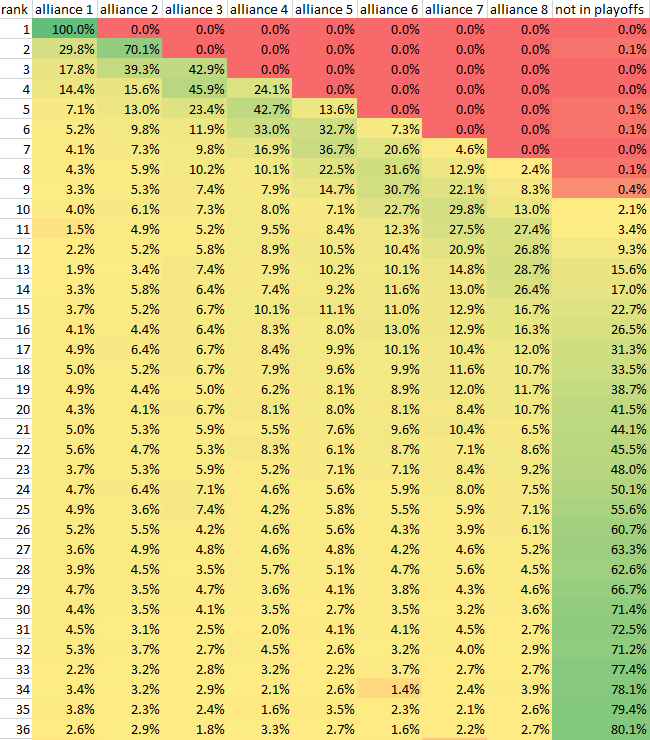 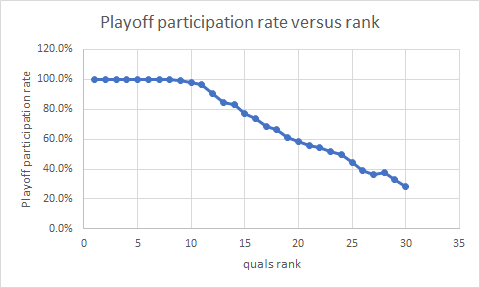 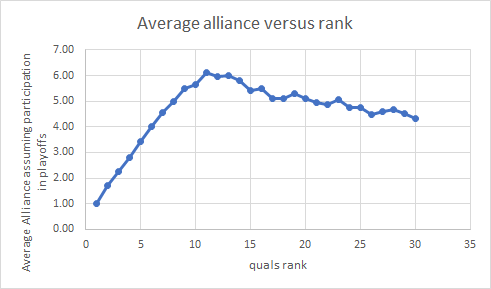 So roughly rank 11 gives the worst average alliance assuming that you play in playoffs. I clipped the graphs at about rank 30 since the averages start to go crazy around there due to smaller sample sizes, but people can play around with the data as they want.

One more fun graph, this shows the most common alliance a team at each rank plays on, again assuming that they participate in playoffs: 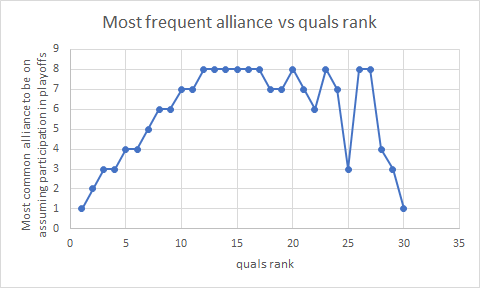 And here’s a fun gif of the data:

Look at that nice wave

I think I see a little ripple bounce back starting at around rank 21, which I expect is the effect of the serpentine draft. Difficult to say for certain though.

Man, this is such a fun data set. Just when I think I’m done, I keep finding other cool ways to break down the data. 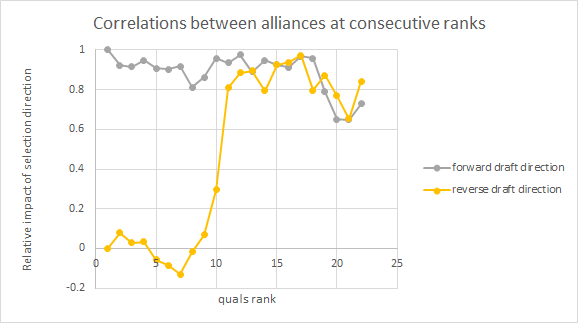 I had to clip the data around here because it starts to get really noisy quickly at rank 23. I’m not sure if there is any real practical use for this data, but it is fascinating to see direct impacts of the serpentine draft represented in data. Relative importances of the first or second round draft for teams was such a nebulous idea to me prior to doing this, I just kind of stumbled into what I think is a reasonable way to quantify it.

Well, I’m not sure exactly how best to approach this, but here’s an excel book that will be expanded upon more in a blog post tomorrow. I’ll post a link to the blog post after it comes out. The data may look nonsensical to you until then.

Here is the blog post where I describe what the above book is all about: https://blog.thebluealliance.com/2019/01/23/1114-is-frcs-greatest-dynasty/?fbclid=IwAR1cZCbl1c-KCT-REk3QW7wSZWHrk3graLk-xbJAVdHFppbSV04FskLk-ks

Around discussion of this, I was asked if I could get a team’s average Elo over their own lifetime. I decided to use end of season Elo since I think that’s fairer for rookies. Here is a book that has all teams:

Also, does anyone know how to make scrolling lists? I could post all team ratings here but I don’t want to take up the whole screen.

Is there any way I could run this myself right after a schedule is released?

I don’t have a simple way to run these right now, maybe sometime I could put it into my simulator. You can however, run my event simulator and look at how each team’s ranking probabilities change before and after the schedule is released. The “average rank change” resulting from this is one of the metrics I evaluated in part 1 of that series.