This question has actually already been asked. But the solution given does not seem to actually solve the problem.

Hey so today I tried getting pathweaver up and running on our robot and it was being very stubborn and refusing to run. I most definately made some stupid error that I can’t find so if anybody can help it would be greatly appreciated. [image] pseudo code in autoInit String pathname = “Unnamed”; try{ Trajectory traj = new PathfinderFrc.getTrajectory(pathname + “.left”); }catch… the output directory is inside the PathWeaver folder, as I did not set it per the documentation

This allows the path to be used. But this process is supposed to happen automatically. Why doesn’t it, or is the documentation wrong?

When I build a pathweaver path, it is placed in a pathweaver folder. And it is never moved into the deploy folder.

In case this matters. I am attempting to use pathweaver with a Romi. So maybe the code must be deployed before the paths get moved. The Romi does not have code deployed to it so maybe that is why this is not happening. 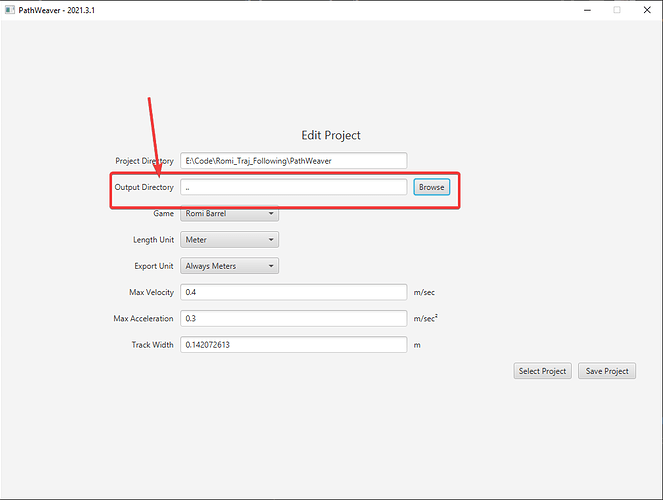 I am not exactly sure what the configuration was when the thread linked above was made. Currently however if you select the output directory to be the root project directory (holds the build.gradle etc files) PathWeaver will automatically place paths in the deploy directory.

There are also PathWeaver specific files that are placed in the PathWeaver directory but you really shouldn’t need to mess with any of those.

Specific to the Romi it runs in simulation so it doesn’t actually deploy any files to the Romi but if you use the standard loading it will work just fine from the local deploy directory.

So I need to not leave the output directory blank?

Ok that worked. I needed to explicitly set the output folder to the project directory.

For some reason the section of the PathWeaver tutorial that says,
"
The directory where the paths are stored for deployment to your robot. If you specified the top level project folder of our robot project in the previous step (as recommended) filling in the output directory is optional
"
was not working.