After months of hard work and beta testing, the PhotonVision team is excited to announce the first full release of PhotonVision! With a focus on robustness and usability, this feature-packed release is a big step towards making vision processing accessible to all teams by improving ease of use and decreasing cost. With everything from GPU acceleration (on supported devices), a Raspberry Pi image, and a custom vendor dependency, to a reimagined web dashboard and vendor support on devices like the Gloworm, PhotonVision is ready to take on the 2021 game. Our most important features are detailed below:

Note: to consistently get the above performance at greater than 480p you’ll need to have well-tuned HSV thresholds. Also, on the Pi Camera v2 PhotonVision can reach up to 120 FPS at 320x240.

The PhotonVision team is excited to bring a new level of accessibility and ease of use to FRC vision processing. If you have a Raspberry Pi laying around we encourage you to flash the image onto it and try out PhotonVision. If your team is looking for a more “plug and play” experience, then you should check out the Gloworm, which can run PhotonVision. And if you just want to follow along (or contribute to the project) then we’d love for you to join our Discord!

Check out the PhotonVision community on Discord - hang out with 129 other members and enjoy free voice and text chat.

If this is your first time playing with computer vision in FRC, we’ve got you covered with complete pipeline tuning docs, which cover everything from HSV filtering and target grouping to camera calibration.

Those FPS numbers are spicy. Do you have pipeline latency measurements as well, and how does that compare to the camera-sensor-to-start-of-pipeline latency? 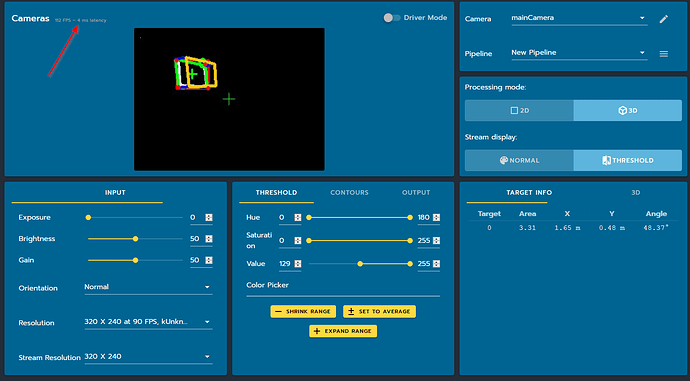 Quick Pipeline Latency samples I just ran on a Pi3b and a v1 camera: