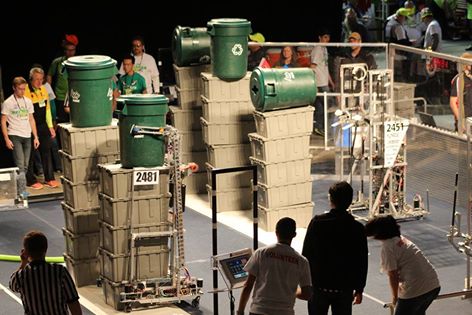 In qualification match 80 at the Rock City Regional, 2481, 2451, and 1208 were 1 second away from a record score of 236 points. Unfortunately, the final stack of 5 with the bin did not count as we were trying to get that scored as the buzzer sounded.

Is there any video of this match available? This looks insane!

Is there any video of this match available? This looks insane!

1208 was supposed to take the outside 6 totes, too, which would have allowed for the 5 full stacks of 6 with bins. They forgot to rotate 180 degrees the opposite way when grabbing the second 2, though. You can see us pause briefly and turn to the opposite side of the landfill when we realized they grabbed those 2. If we didn’t have to sprint to the corner and back for the final totes, it would have been scored for sure. In their defense, we were asking them to opperate out of the opposite side of the landfill than they were used to since we attacked the same area. They did a phenomenal job in their unusual work placement and still got their stack built. It was an incredible match.

This game is so much harder than it looks! Congrats on capping four (almost five) tall stacks. I’m guessing that your alliance decided that adding nooles to the RCs would take too much time to be a net positive?

I’m wondering if it would be worthwile to program an automated “disengage” function a second or two before the end of the match. It would likely be disastrous in some cases, but highly productive in others.

Very impressive, nice work! I see that two of you moved on to eventually win the regional together.

very impressive, look’s awesome.
Rock City was an awesome regional to tune into.