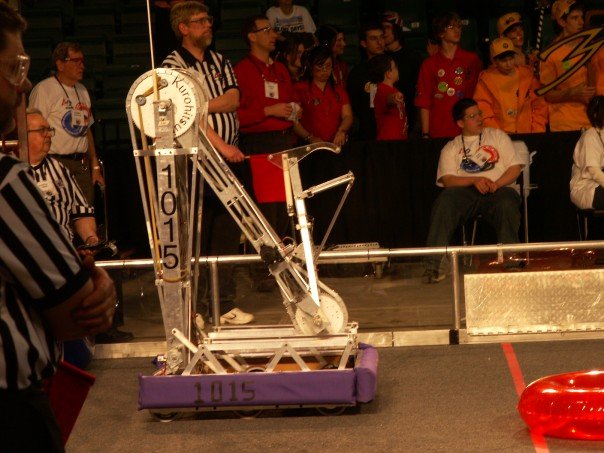 Here’s a pretty much perfect portrait of team 1015’s robot for this year. It’s officially named Kirohitsuji (japanese for black sheep… students that voted that had no idea of “meaning” of that phrase), but a few others and myself prefer to call it Rapscallion.

We (well… I) want to replace the lexan finger with tinted lexan or something, preferably purple. It doesn’t show up in most pictures currently.

Are those huge things sprockets? :eek: How big are they and what pitch of chain are you using?

I like the surgical tubing in the back, we tried that on our jointed arm too

To tint the gripper, have you considered colored mono-kote? I’m refering to thin, semi-transparent, heat shrink covering used for model airplanes. You could find it in any hobby store that caters to the RC airplain kit building.

It would be light weight and easy to apply (scissors, iron, and heat gun), and would let you add color without swapping out your gripper. Your could even use multiple colors to create a fancy design.

Thanks for sharing your robot picture.

Thanks for that advice, ericand. Sounds simple, and I’ve had zero luck finding other stuff on google…

I believe the large sprockets are 96 teeth. Connected to 16 teeth sprockets. #35 chain. the chain hasn’t broken

The only problem has been that we initially usedset screws for the small sprockets. We drilled through the shaft and put screws in during the finals at GLR. The main arm is powered by the two keyand motors, the secondary arm by the window motor, and the grabber by the globe motor. The globe (at 180 rpm I think) is WAY slow, though.