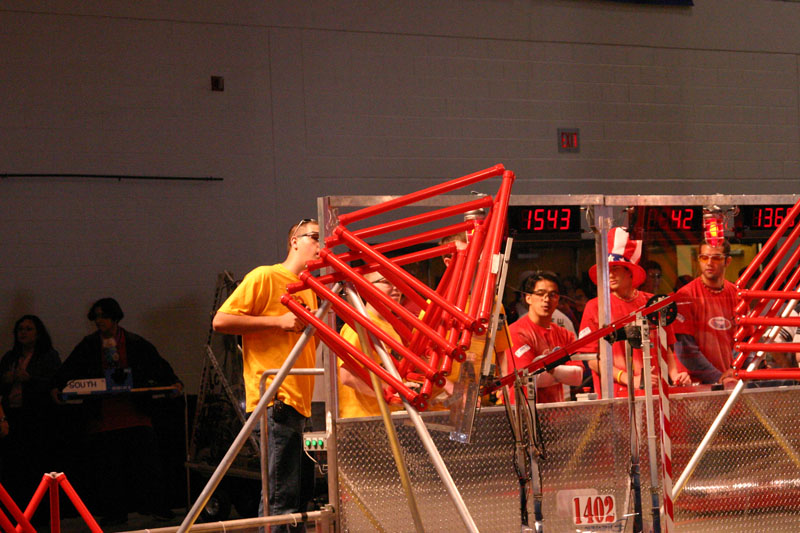 WOW!! :ahh: How effectively can it cap with four (loading included)? Can it cap fast? And lastly, can it cap the center goal?!? I must say, its very impressive!!!

That is incredible. :ahh: Doesn’t look to me like it can get much height though. I thought it was incredible when a team capped 3 at a time.

I was looking out for 1402 (not 1042)all day on the webcast(between classes) The most I saw them cap in one match was 10. Two triple caps, and one Quad. I think realistically, with a little practise, they could do 16 tetra’s on their own in a match.(four trips of four tetras) That is considerably more than any team I have seen so far this season. I’m very impressed with this second year team. Watch out for them at Championship.

I’m watching the Florida Regional right now. I’m very impressed by Team 1402. They can Cap 4 tetras at a time EASILY and they just did it on all three goals in their zone. VERY Impressive. Final Score was 49-23, they got 46 points by themselves. Unless they fall apart when teams deticate themselves to playing defense against them look for them to win.

How many can the robot cap per match? It appears that they capped the middle home row also, with 42 seconds to go.

1402 was a really effective robot at Florida Regional. They stacked the row in the back (all 3 goals) and 4 tetras per goal.

Hey you guys just look like we do : ). Only that our cap limit is 3 Tetras at a time :rolleyes:. Imagine you guys in an Alliance with us @ the nationals : P, I see a field swimming in Tetras ^^ : ). Great Job guys, I’m looking forward to meet you at the nationals …