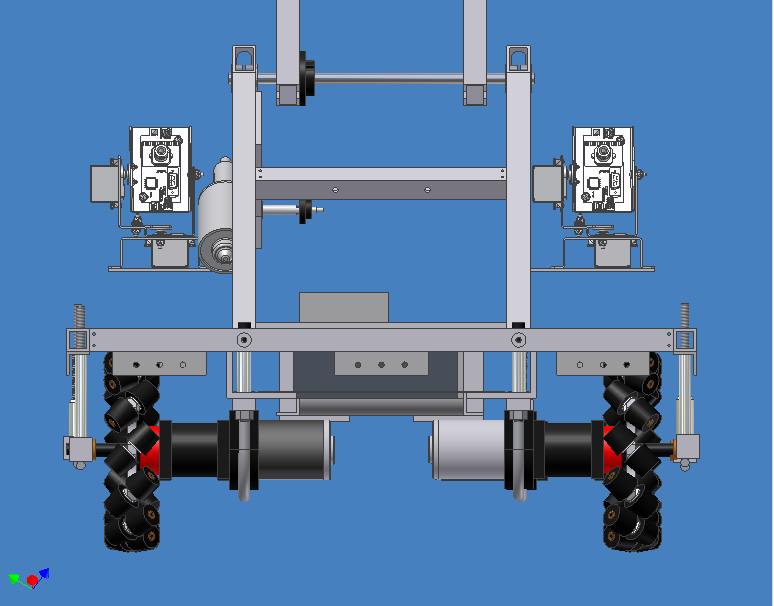 The camera mount is more secure than it looks from the front.

dual cameras, mecanum (with banebots) drivetrain, angle iron for the bumpers mounts, and what appears to be an a-frame arm (simliar to 254/60/22 arms in 04 and 05). I’m assuming the posts coming down from the corner of the frame is for suspension, but I can’t tell how it works. Are the red things encoders? What kind of control method are you planning for the holonomic drive?

two cameras makes me happy. Seeing that teams with programming resources are going for the green is one of my favorite parts about first. I like the mecanum drive setup and i hope that works well for you. Seems like a decent option this year, be sure to tell us how it works out. I’m going to postulate that this team will be adding “ramps”, “lifts” or other ways to assist robots that want to be off the ground. It looks like a spacious design and should prove to be a formiddable opponent and strong alliance member. espeically if they can score a keeper

The dual camera setup looks really cool! What motor is that next to the camera on the left?

That appears to be a van door motor. I can only imagine they’re using it as a placeholder for some other motor.

I’ve been coding for this robot for about three weeks now… it’s nice to see hardware actually starting to come together in the lab so I can get some proper TESTING done.

Anyway, there is an encoder on each gearbox for PID (or PD, at least) purposes. The control system is driver-relative, using a magnetic compass. I’m hoping to use the two cameras to score keepers on spider legs that are in between two green lights. Also planned is an ultrasound sensor at the end of the arm for precise postioning relative to the diamond plate.

Definitely an ambitious step up for 1072, both in terms of code and hardware… I hope we can actually pull it off.