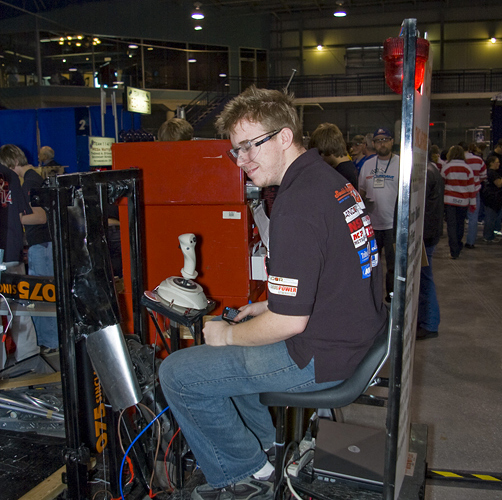 A terrible picture of me, however, thats not why I’m posting it.

Our cart has many features, some of which come from past robots/KoPs:
Revolving Warning Light (from our 2003 robot)
Kit Compressor, connected through IFI controller/NASON switch, usable for precharging the air system on the robot (yes, I know this is against the rules as written, though it shouldn’t be), as well as blowing off metal bits, and blowing up trackballs. (I believe from the offboard system we had in 2006, though also possibly stolen from 2003 or 2004’s robots.)
Dual 12V deep cycle marine batteries, these are designed not to spill, and are connected in parallel to offer long battery life, as well as very stable power supply (drops only about 1v under full load)
Multiple Safety Lockouts for motion (The springs on the seat load up a switch with someone in the seat, the front bumper has a similar sensor for collision detection and the joystick has to have certain buttons pushed before it will drive)
Chain Guard for the lift drivetrain
Onboard Battery Charger, simply plug in to charge. (Stolen from a 2003-2007 kit)
Lock pins for the lift, to prevent the lift dropping suddenly if the cable breaks
2004 IFI Control system (RC/OI pair) along with 3 victors a spike and 2 fuse blocks stolen from various years kits. This allows us to easily reprogram its software based safety features, as well as reprogram how it drives.
It has a removable table, used for holding tools/a laptop (pictured, behind my leg)
It also has removable side legs which our control board will rest on so everything is right there nice and organized to test with.
The platform is setup so that when the robot rests on it, the wheels do not touch the platform, so we can safely test the drivetrain/autonomous in the pit.
Under the platform, the two steel forks are spaced such that you COULD lift a standard pallet with them, however, we haven’t tried. With a thicker cable (i think we’re running 18 gauge aircraft cable right now) its lifting capacity would be rather high, plenty more than would be needed to throw its balance way off.
Underneath all the steel, it started as a standard power wheelchair.

We have been absolutely floored by the motors in this machine. They are designed for 24V, and we run them at 12V. They STILL have no problem moving the ~1000lbs of cart, robot, and driver at a walking pace. If we ever needed to run really long distances with it and wanted more speed, I suppose we COULD buy some 24V victors from IFI and set up a split voltage system (partly 12V, partly 24V), but I don’t really think its necessary.