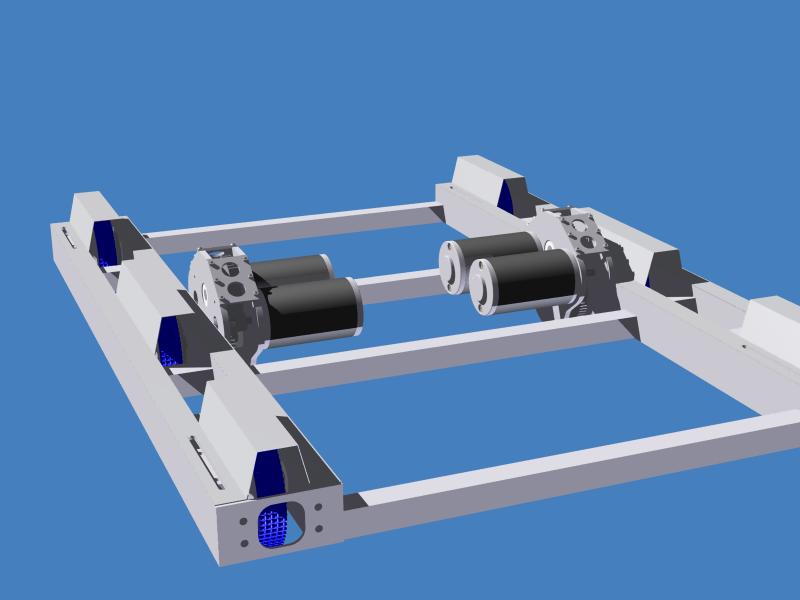 Here’s the full base, with the drive modules I designed earlier. I finally realized that it’s going to be very hard to make a light frame that will keep these modular, and so for the first stage of the design, I just made it in the position where we could weld it. I also added random little sheet metal covers over the wheels, which would eliminate the need for different plates to stop game objects from getting sucked into the wheels.

How are the cross-supports going to be attached? I would think that simply butt-welding them to the modules would be rather weak.

Or is there a more sophisticated method of attachment that isn’t visible?
I would think you guys would be worrying about welds after what happened last year.

what happened last year, i’m hoping will not happen again. If it does, we might as well enter battelbots. For those that don’t know, were were tipped, and while tipped, repeatedly rammed until multiple frame members broke. This wasn’t the “lets move this bot out of the way” type of ramming, this was the angry, non gp type of ramming. So I hope that won’t happen this year.

As for strength, this is a temporary idea, and will be molded around the game and manipulato design for next year, in order to add more stability.

What speed(s) will this base drive at? How heavy will it be?

This thing drives at 6 feet per second, until I swap the gearbox for one of my 2 speed designs, in which case it goes 4 and 10.

As for weight, Inventor seems to be having issues with weight (it thinks that a 1x1x1 of aluminum is 8 pounds…). However, from previous build experience, I’m guessing 25 at the most, and that’s including the motors and gearboxes.