pic: 1189 hangin' around on the practice field 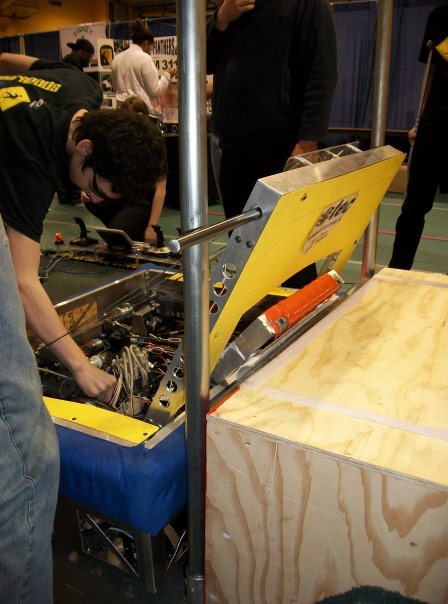 Unfortunately, this never actually worked on the field due to a broken weld right before the match that we would have had an opportunity to hang in.

There are two different “arms” that we use to hang with. The first one that deploys is the smaller one, with the orange urethane bands wrapped on it. It’s hard to see in this picture, but there is a half-circle of PVC that lines up with the lower horizontal bar of the tower. The larger arm - with the yellow plate across the top that kept balls out of our control board during a match - then deployed through the plane of the tower. When it was fully extended, it triggered a limit switch, which caused the two shafts on the sides to pop out and hook us onto the tower. We would then winch ourselves up, locked onto the tower by the horizontal shafts, rotating around the lower horizontal tower bar until the top of the lower arm hit the top of the platform. The orange belting increased the friction between the lower arm and the top of the platform, which kept the robot from slipping off of the platform while continuing to be winched up.

Wouldn’t the orange arm and how it interacts with the bottom pole be below the plane of the platform?

Wouldn’t the orange arm and how it interacts with the bottom pole be below the plane of the platform?