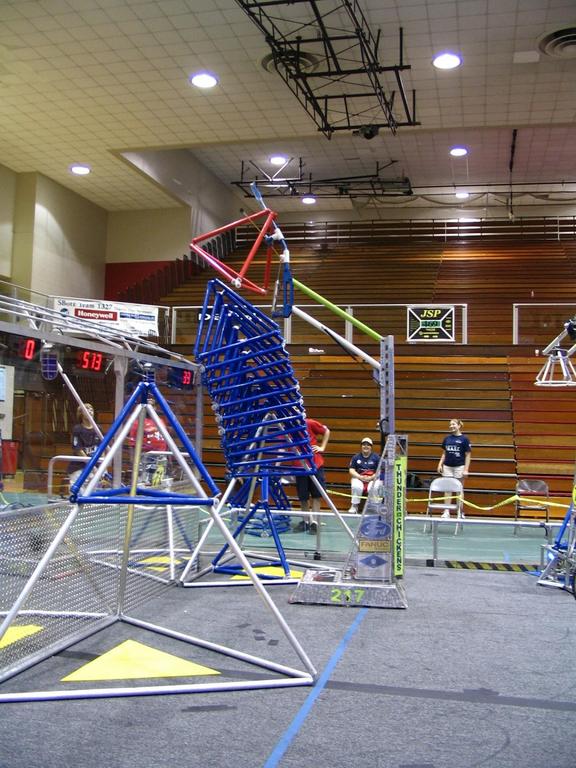 :eek: thats awesome…but i think blue won lol, what was that 71 behind you that did that lol. just kidding great robot loved the arm design.

Simply amazing. Now I think I recall people back during the season saying robots wouldnt be able to stack higher that 7 or 8 high. Yay defiance.

ooooo I remember passing by this on my way out of the talent show!
You guys would have capped it fine if it wasnt all leaning back so far…

It was team hammond but not a robot. That stack was all human made. It was funny thought brecause red was the only side working at the time.

Oh yeah! It was our side that had to freeze up, while the red side had it going all out. We didn’t want to lose, so we got desperate, and thus it became Man Vs. Machine! Good times… :rolleyes:

When 217 tried to cap the goal with that red tetra, gravity kicked it, and the stack started to tilt lethally toward the players stations, and got everybody running.

Good thing the timer stopped the robots before it got any worse.

IRI was so fun.

What that picture doesn’t show is the human robots from the blue side trying to block our robot with tetras. We had the tetra just above the stack and some human robots ran around the outside of the arena jammed a blue tetra under the red one causing the stack to tip.

They did scurry like ants from under a rug, though …

Sweet job man. We were able to get 11 on the center goal once, but that was witout any interference, and more than 120 seconds of time.

see that The Thunderchickens are still being amazing. great partnering with you guys this year and Finger Lakes.

Yeah that was awesome to see. If only the Thunderchickens could have capped it!

Heh, not to be negative, but isn’t that stack only 11 tetras? Were you including the bottom one under the goal? If so, then it is 12.

Nah, I think it still counted, since the Thunderchickens tilted the stack like that, not us. We had it going straight up from what I remember, so it still should have counted.

BTW, the Thunderchickens were on the opposing side, if you didn’t catch the red tetra they were holding.

Nope, they all count. Doesn’t matter how far off-center the stack is, as long as (1) the goal is the only thing supporting the stack, (2) no blue robot is touching the stack, and (3) the tetra clovers at the top of the tetras are within six inches of each other. THEORETICALLY you could have a stack with all 80 tetras on any goal and they would all count. This won’t happen unless someone has an industrial sized scissors lift and uses it, so it’s still just a theory…